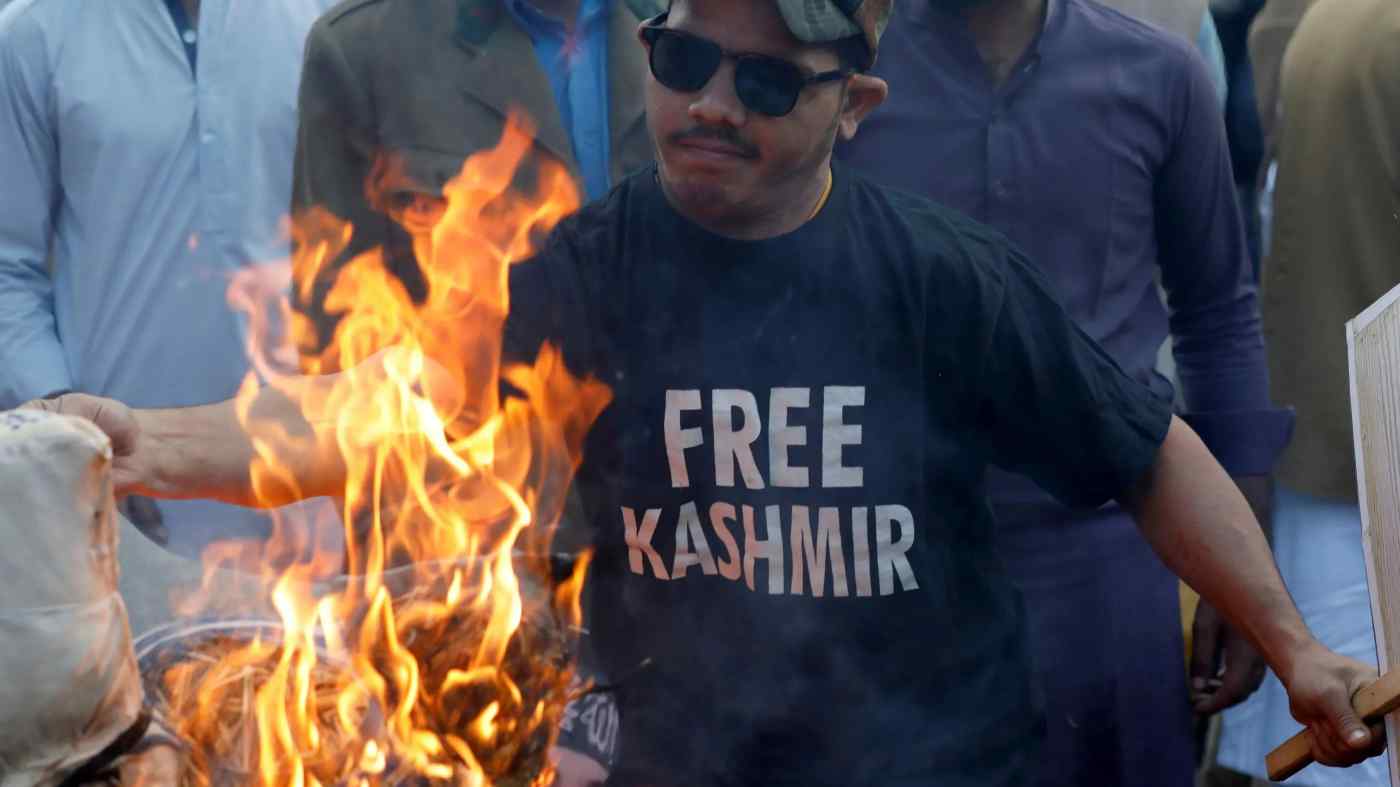 An activist sets on fire an effigy of Indian Prime Minister Narendra Modi during a protest to express solidarity with the people of Kashmir on International Human Rights Day in Karachi, Pakistan, on Dec. 10.   © Reuters
MOYURU BABA, Nikkei staff writerDecember 14, 2019 15:00 JST | India
CopyCopied

NEW DELHI -- India and Pakistan's territorial conflict over the Kashmir region is starting to cast a shadow over the nations' respective economies.

Pakistan is feeling the effects of the suspension of medicine and cotton supplies from India, while economic losses to India caused by the dispute are estimated to have exceeded $1.4 billion to date.

Although they are not in a position to reach a political compromise, calls for the neighboring countries to improve economic relations are growing.

On Aug. 5, India revoked the special autonomous status of the disputed part of Kashmir under its control, sparking an angry reaction from Pakistan. As a part of protests, Pakistan has been displaying a running toll of the days passed since the revocation and its related curfew on electric bulletin boards across its capital, Islamabad.

Now that four months have passed since Pakistan informed India of its decision to suspend trade with it as a countermeasure, adverse effects on its economy have become evident.

"As the supply of inexpensive generic drugs from India has been temporarily halted, people's daily lives and hospitals are being hindered," said an executive at a Japanese company operating in Pakistan. The use of alternative drug supplies from the Middle East is increasing as a result of the suspension, he said.

Exports to Pakistan from India increased 7.4% in 2018 from the previous year to $2 billion, marking an expansion of more than 5% for the second consecutive year. The most valuable export to India's neighbor is cotton, which it depends on for its textiles industry, but Pakistan has now turned to the U.S. and Brazil for its cotton supplies.

India is also reportedly importing chemicals and other products from the Middle East as a result of the dispute.

The situation puts more pressure on Pakistan's economy, however, as its alternative suppliers charge higher prices than their equivalents in India.

India's beefed-up anti-terrorism operation, meanwhile, has caused economic losses worth more than $1.4 billion due to a curfew, restrictions on retailers' operations and reduced tourism, according to the Kashmir Chamber of Commerce and Industry.

With access to the internet and social media cut, it is impossible to continue supplying Kashmir's specialties of silk carpets and craft products, said Sheikh Ashiq Ahmed, head of the chamber.

There are areas where the availability of vegetables and other foodstuffs is limited because shops are only allowed to open in the mornings until 11 a.m.

Pakistan has a population of 216.5 million as of 2019, the fifth largest in the world. With population growth continuing in India and Pakistan, the two countries are forecast to be home to a combined 1.8 billion people in 2030, accounting for more than 20% of the world's population. But a suspension of flights has limited the movement of people between the two nations.

For India, which has suggested it may withdraw from negotiations for the Regional Comprehensive Economic Partnership -- a proposed free trade agreement involving 16 countries -- Pakistan may become a major destination for its exports.

With India and Pakistan having similar living practices, business groups in both countries are stepping up calls to improve bilateral economic relations.