BARAMULLA, India -- While 2020 will be remembered by most around the globe for the COVID-19 pandemic, the people of Kashmir will recall it as the year their local war moved up to two fronts.

On Nov. 13, Imtiyaz Ahmad, 47, was at work in a passport office in Srinagar, the main city in Indian-controlled Kashmir, when his phone alerted him to shelling between India and Pakistan across Jammu and Kashmir's Line of Control (LoC). He immediately called home to his wife in Sirankote, a village on Pakistan's doorstep, but there was no answer.

Ahmad hurried home to his wife and their three daughters, trying hopelessly to get through on his cell all the way.

"I arrived the next morning and met my family," Ahmad said. There was huge relief to see them safe, but any thought of returning to Srinagar was deeply unsettling.

The hostilities along the LoC on Nov. 13 left dead on both sides. India lost four soldiers, a member of the Border Security Force and six civilians. Pakistan lost one soldier and four civilians.

"Nobody left their houses to find out what happened because of fear," said Bashir Ahmad Kali, 50. Kali was driving his Sumo taxi along the narrow lanes of Balkote, an area of about 50 households nestling in the snow-covered mountains.

Suddenly he heard the cries of villagers, and screams of "Margayi, margayi!" -- "She's dead, she's dead." It turned out a woman of 30 had been killed just 10 meters up from where Kali stopped his vehicle. People were frantic in the chaos.

"Everyone was trying to escape the shells coming across the LoC," Kali said.

Jammu and Kashmir has been the focus of a major dispute between India and Pakistan since the 1940s. The feuding neighbors have already fought three wars in the mountainous region, and the territorial dispute grinds on with constant shelling across the LoC.

Local media reported 3,386 ceasefire violations in Jammu and Kashmir from January to August 2020. There were 3,479 incidents in all of 2019, so a worsening trajectory is evident. When Nikkei Asia contacted the commanding officer of India's 19th Infantry Division, Major General Virender Vats blamed the deteriorating situation on Pakistani aggression. "If the Pakistanis keep sending terrorists to this side, definitely there will be escalation -- casualties are beyond our control."

Kali said tensions worsened significantly in May when Chinese and Indian troops clashed brutally in eastern Ladakh along the Line of Actual Control (LAC) that separates areas controlled by Beijing and New Delhi.

"This obviously has an adverse effect on people living near the working boundary, who are subjected to shelling on a regular basis affecting them both materially and psychologically," he said. "The increasing India-China conflict only aggravates things." 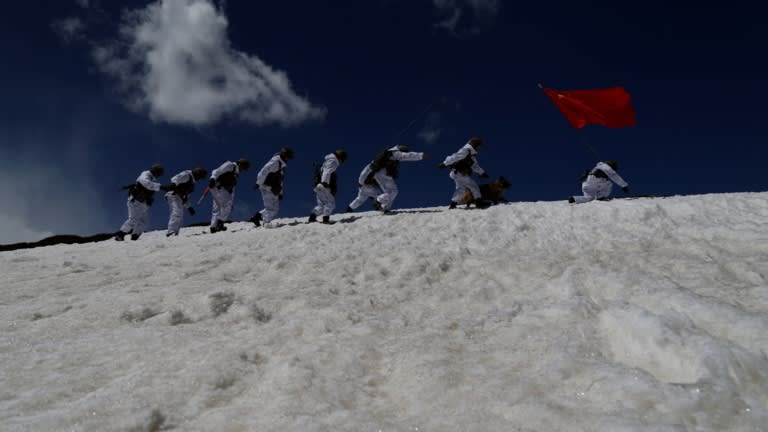 High altitude training: a Chinese People's Liberation Army patrol in Ngari prefecture in the Tibet Autonomous Region along the border with India.   © Reuters

In June, India confirmed that 20 of its soldiers were killed in a savage encounter at Galwan along the LAC. China has not declared its casualties.

Ajai Sahni, the executive director of the Institute for Conflict Management in New Delhi, said that one reason the situation has become more complex is that all three countries are nuclear powers.

"Kashmir has always been a nuclear flashpoint," he told Nikkei. "There has always been the threat of war looming over Kashmir that is not only in areas bordering with Pakistan -- it is also across the border with China. If this converts into a two-front war, then India faces an unprecedented threat that it does not appear adequately prepared for."

Vulnerable as they are to unpredictable shelling, Kali and everyone else living in Balkote despair of asking for defense bunkers from the authorities. "We will have to leave this place if they just give us makeshift tents," he told Nikkei. "The soldiers all get given life-preserving defenses -- only poor people die." Indian security forces patrol the streets of Srinagar, the largest city in the Indian union territory of Jammu and Kashmir. (Photo by Bhat Burhan)

"The China-Pakistan Economic Corridor is a major factor in this whole game," said Rahul Bedi, a senior journalist and security expert. "The Chinese want to secure their corridor with Pakistan, and one of the ways to promote that is by controlling Kashmir. Cooperation between the Chinese and Pakistani militaries is of critical importance to both Islamabad and Beijing in shaping the larger geopolitics of Asia."

Shameema Jan, 40, lived with her family in two houses above Balkote. Her properties were flattened by shelling on Nov. 13. Such incidents go largely unnoticed because of the remoteness of the areas.

"We have nothing left now, just the clothes on our bodies," Jan told Nikkei. "It took us years to build these houses, but it didn't take a minute for them to be destroyed."