Trump's bluster points to a more assertive US approach to China

Tensions appear to be ratcheting up between the U.S. and China, unnerving neighboring countries and foreign policy experts concerned about the prospect of an all-out conflict in the Pacific. And many are placing the blame squarely on Trump, who declared dismissively after his telephone call with the Taiwanese leader, "I don't know why we have to be bound by a 'One China' policy."

Loath as I am to agree with Trump about almost anything, on this one, he may have a point. Since the start of the U.S.-China detente with then-President Richard Nixon's groundbreaking visit in 1972, America has been content to allow Beijing to set the parameters of the relationship, with the U.S. often getting little or nothing in return. It may be time to start treating China like any other country -- and that may mean talking tough when needed and ignoring the fabled thin-skinned sensibilities of Beijing's Communist rulers.

Here is a case in point: China's leaders habitually insist that American presidents not confer anything that smacks of legitimacy on the democratically elected president of Taiwan, which China considers a renegade province -- despite the fact that the U.S. sells billions of dollars in weapons to Taiwan and is honor-bound to come to the island's defense in the event of a Chinese invasion. This means that Beijing regularly protests when Taiwanese leaders seek State Department permission to make stopover flights in the U.S. en route to South America, or to visit their American alma mater for a commencement address.

But Beijing's rulers gave red-carpet treatment to Sudanese President Omar al-Bashir, who is wanted for genocide and other war crimes by the International Criminal Court for his role in mass killings in Darfur.

Another case in point: The Dalai Lama, Tibet's spiritual leader and a Nobel Peace Prize winner, is regarded by Beijing as a dangerous criminal. So when he visits Washington, to meet with fellow Peace Prize winner U.S. President Barack Obama, he is forced to use hidden back entrances to the White House, there are no photo opportunities or press conferences, and he is met in the Map Room, far from the Oval Office, where the president regularly meets distinguished foreign visitors.

Yet when former Iranian President Mahmoud Ahmadinejad visited China in 2012 -- amidst American and Western sanctions over Iran's nuclear program -- the man who called Israel "a rotting corpse" to be "wiped off the map" was given all the trappings accorded any visiting head of state.

BAD BET Why is it that America's leaders go into such verbal and diplomatic contortions to placate China's rulers, only to get so little in return?

First, from the time the U.S. opened up to the Communist government in Beijing -- a diplomatic gambit known as "playing the China card" against the Soviet Union during the Cold War -- Americans have been awed by China's size, wary of its future military might, but also mesmerized by its potential as a commercial market.

But U.S. engagement with China has always been premised on a bet that has so far proven wrong -- that as China prospered, with assistance and a friendly hand from the West, it would essentially become more like America, playing by the established rules of international behavior. "Washington for years believed that a strong, stable China would be a friendlier China," said John Pomfret, a former Washington Post colleague and author of the book "The Beautiful Country and the Middle Kingdom," about the history of U.S.-China relations. "It didn't turn out that way."

China has long been held to a different standard than other countries. What other country could get away with widespread repression, with jailing a Nobel Prize winner and human rights activists, with harassing U.S. Navy ships in international waters, and with raiding the offices of multinational companies on spurious charges?

In late 1988, I visited Burma, where the military regime violently crushed pro-democracy protests that had been sweeping the country, killing and imprisoning thousands and forcing activists to flee into exile. The U.S. responded by slapping tough economic sanctions on the country that lasted for more than two decades, until Myanmar, as it is now called, launched a democratic transition.

In 1989, when China's People's Liberation Army similarly used violence to crush its own pro-democracy movement, the U.S. briefly suspended high-level contacts -- but then-President George H.W. Bush secretly sent his national security adviser, Brent Scowcroft, to Beijing a month after the violence to resume dialogue. By December that year, six months after the students were massacred in Tiananmen Square, Scowcroft was back in Beijing toasting his Chinese hosts saying: "My colleagues and I have come here today as friends, to resume our important dialogue on international questions of vital interest to both our nations."

As a correspondent in Southeast Asia at the time, I asked a veteran U.S. ambassador in the region to explain to me the discrepancy -- why the U.S. isolated Burma but raced to mend ties with Beijing after similarly brutal crackdowns. The ambassador replied simply and directly: "In Burma, we have the luxury of living up to our principles."

TOUGH QUESTIONS So, is it time for a new approach to China -- and is Trump the one to carry it out?

The president-elect has already promised to get tougher on China's lopsided trade and investment practices, which put foreign companies at a disadvantage. Trump has accused China -- with good reason -- of manipulating its currency. He has also threatened to impose tariffs as high as 45% on Chinese exports. And after his phone conversation with Taiwan's president, first seen by analysts as a novice's mistake, he doubled down and threatened to make the "One China" policy a bargaining chip in future talks over trade issues.

"Trump's new tone on China is actually a logical extension of the realization in America that the bet made on China, by both Democratic and Republican administrations, has not worked out," Pomfret said. 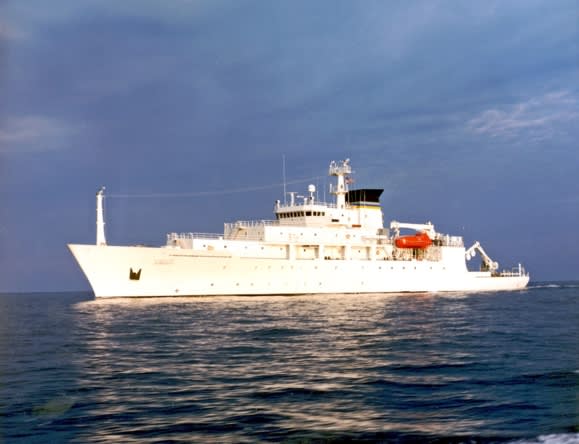 A drone deployed by the USNS Bowditch, an oceanographic survey ship seen here, was seized by a Chinese naval vessel in international waters on Dec. 16. (Courtesy of U.S. Navy)

Trump might find some unlikely allies for a tougher approach. New York Senator Charles Schumer, the incoming Senate Democratic leader, is one. Schumer, who has long advocated a tougher trade line against China, sounds a lot like Trump when he says, "We're turning our economy over to the Chinese."

Definitely a new, tougher approach is warranted, as long as the steps taken are deliberate and all the potential long-term consequences are thought through.

But there are other ways to show toughness without inching toward conflict. That might mean allowing the Dalai Lama to come and go by the front door of the White House, and meeting him in the Oval Office; or speaking with Taiwan's democratically elected president for more than just a brief telephone call.

In other words, maybe it is time to start treating China like any other country. Trump may not intend it, but with a more realistic China policy, the U.S. could actually start living up to its principles.