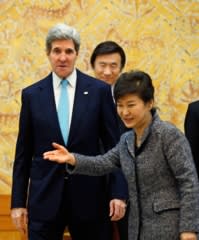 SEOUL -- With the U.S. leaning on Japan and South Korea to reconcile, the embittered neighbors just may try a different approach.

At a news conference here Thursday, Secretary of State John Kerry urged both sides to work toward a rapprochement before President Barack Obama travels to Asia in April, and he offered America's cooperation.

Asked whether Obama would try to mediate between the two countries on his visit, Kerry said: "Frankly, we hope that this issue will not be outstanding in a way that requires the president to do that."

"We don't want to wait until President Obama is here," Kerry said at the conference, alongside South Korean Foreign Minister Yun Byung-se.

The secretary also said the U.S. will continue "to encourage both allies to find mutually acceptable approaches to legacy issues from the past."

"We're going to work very hard, obviously, over the course of the next weeks and months," Kerry said.

The U.S. would prefer to let the two allies sort out their differences. But recent events in North Korea -- notably the execution of presumed No. 2 Jang Song Thaek -- serve as a reminder of how unstable the country can be, hence Kerry's prodding.

"It is vital for us to be able to continue to stay focused on the high stakes," he said.

In fact, Japan and South Korea are hoping to make up. One possibility is a meeting between Japanese Prime Minister Shinzo Abe and South Korean President Park Geun-hye next month on the sidelines of a nuclear disarmament summit in the Netherlands.

Still, a reconciliation is not exactly within sight.

"During the past few months, some Japanese political leaders have made a lot of historically incorrect remarks," Yun told the news conference.

As long as such "revisionist" remarks continue, Yun said, "it will be difficult to build trust between our two countries."

"These leaders must look at history as it is, and they must be very sincere," he continued.

Meanwhile, there is loud grumbling on the Tokyo side that Japan always has to make the concessions. Abe, while keen on a summit with Park, is showing no inclination toward changing his views on such issues as the Imperial Japanese Army's wartime brothels, an issue that Park has dwelled on.