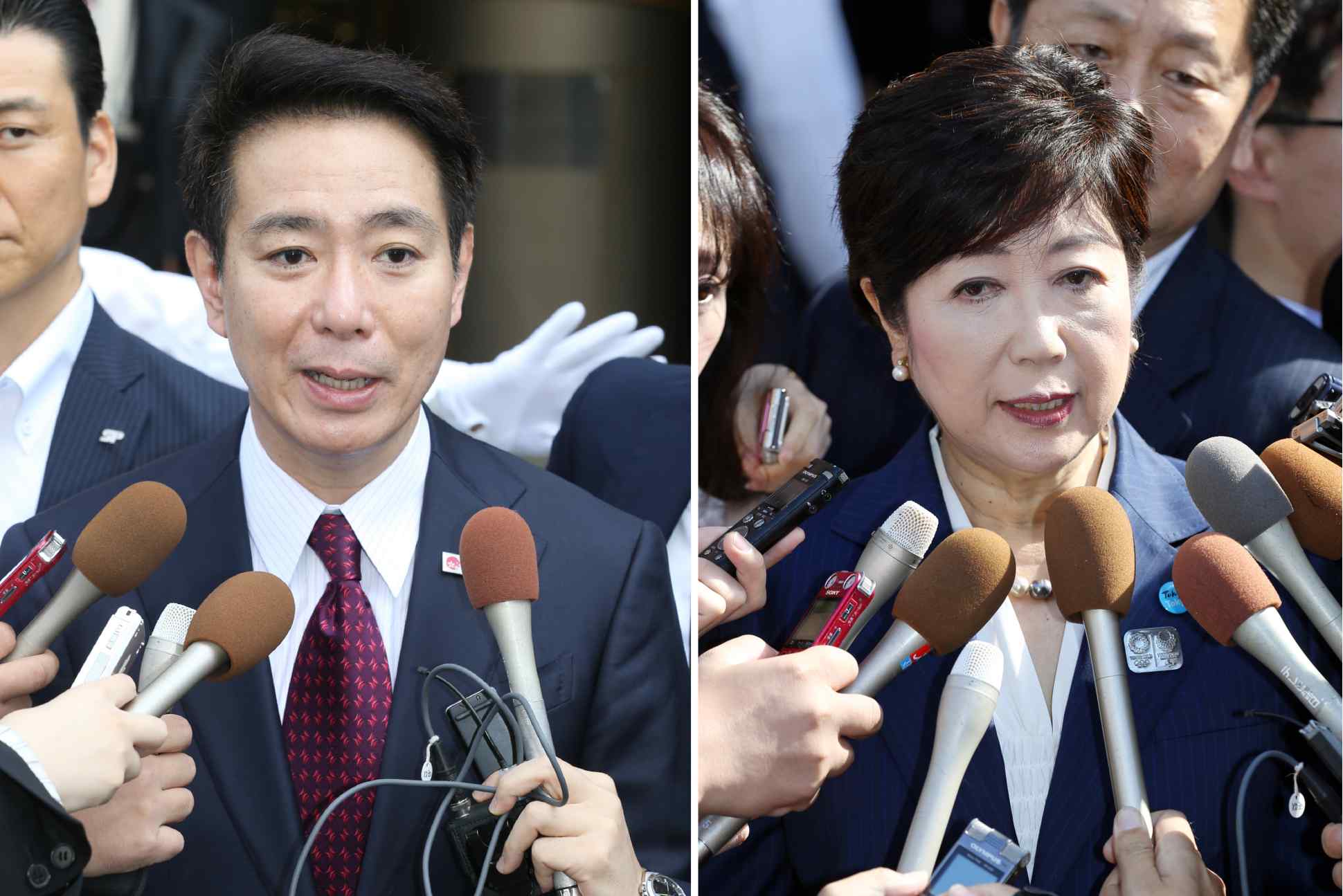 TOKYO -- Cracks are emerging within the opposition Democratic Party as liberal-leaning lawmakers bristle at Tokyo Gov. Yuriko Koike's announcement that her party, the supposed merger partner, won't have room for those not politically aligned with her conservative views.

Some would-be candidates "will be rejected," she told a news conference Friday, casting a pall over the experiment for a grand opposition realignment.

Initially, the plan seemed simple enough: Members of the Democratic Party are to abandon that banner and run under the maverick governor's Kibo no To, or "Party of Hope," in a looming Oct. 22 lower-house parliamentary election. But while Seiji Maehara, the Democrats' leader, seeks to have Hope endorse all candidates from his party, Koike told him in a meeting Friday morning that she intends to be more selective.

To run on the Hope ticket, candidates will need to fall in line behind Koike on key issues such as national security and whether to revise Japan's pacifist postwar constitution. This will exclude more liberal Democrats and, the governor hopes, help Hope avoid the charge that it is simply the Democratic Party under another name. What to do with the constitution is a particularly divisive issue: Hope officially favors revision, while many Democrats seek to keep the charter as-is.

Not even veteran lawmakers at the heart of the Democratic Party are assured Hope's backing. Goshi Hosono, a former environment minister under the onetime Democratic Party of Japan and a founding Hope member, has urged "those who have served as prime minister" to keep their distance from the new party -- a jab at ex-leaders Yoshihiko Noda and Naoto Kan. Koike said Friday only that she would make a "comprehensive" assessment of whether to let such figures in.

So much for unity

Noda shot back at Hosono on Friday, saying he wouldn't try to appease someone who had already abandoned the Democratic Party. And speculation is flying among more liberal Democrats about who could be on the chopping block. Some believe Koike will cut around 20 Democrats -- a possibility that has the labor union Japanese Trade Union Confederation, which backs the party merger, concerned.

On Thursday, when Prime Minister Shinzo Abe officially dissolved the lower house for a snap election, Maehara urged all Democratic lower-house lawmakers from the last parliament to switch parties, under the assumption that their reelection bids would all be endorsed by the Party of Hope. Party officials on Friday morning asked those legislators to give notice that they were leaving the Democratic tent and submit requests for endorsement to Hope -- only to withdraw that instruction around two hours later. "The liberals objected to the plan," a source close to the matter said.

Some are refusing altogether to join Hope. Lawmaker Seiji Osaka intends to run as an independent, and several others are exploring that option as well. One veteran legislator who could fail Koike's test of policy loyalty has suggested the lawmakers form a new party of their own.

Yet picking and choosing members, even among political heavyweights, has historically been part of organizing new parties in Japan. When the former DPJ launched in 1996, leaders such as Kan and Yukio Hatoyama, both of whom would later become prime minister, drew controversy by freezing out former Finance Minister Masayoshi Takemura and others. While Maehara claims that none will be excluded this time around, it is difficult to say with any certainty what the outcome will be.

As the opposition struggles to get its act together, the ruling Liberal Democratic Party is on the offensive. "Fads won't create Japan's future -- sound policy will," Prime Minister Shinzo Abe said during a Friday stump speech.

"Campaign season used to be a time to battle over policy and visions for Japan's future," the leader said. "Now it's all about who to bring together to ensure a victory."

"Back in the 1990s, there was another surge of new parties," Abe reminded his listeners. "What did that bring us? Political chaos and economic stagnation." And the period of DPJ government running from 2009 to 2012 "left the economy in a slump and sent companies fleeing Japan for destinations abroad," the prime minister said.