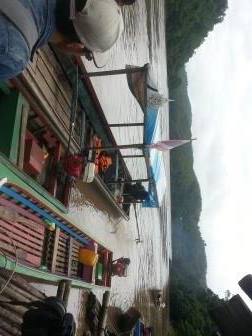 The Salween as it swings into Myanmar at Sob Moei, where residents fear the back-up from a planned hydro dam 47km downstream could force them out.   © HAMISH McDonald
HAMISH McDONALD, Contributing WriterSeptember 14, 2016 10:00 JST | ASEAN
CopyCopied

SOB MOEI, Thailand -- To reach this village, you leave Mae Sariang in northwestern Thailand and drive a couple of hours along winding roads carved into the sides of valleys before reaching a landing on the wide, fast flowing Salween river.

You take the steps down a muddy bank to a shack floating on a bamboo raft, where you board a long, narrow river boat piloted by Saing, an ethnic Shan from Myanmar. After casting off, he dips a propeller into the water and guns the unmuffled car engine attached, outboard style, to the end of a long drive shaft. 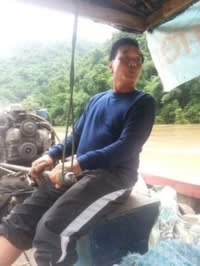 For an hour, Saing speeds his craft downriver between densely forested hills, skirting whirlpools and hidden rocks, while on the banks the occasional patrol post appears flying the flag of either Thailand or Myanmar since the river marks the border of the two countries for about 150km.

For decades, the river also represented a border between conflict on one side as ethnic minority armies fought Myanmar's army and an informal asylum sanctuary on the other side. But now as Myanmar's new elected government tries for a political settlement with rebel armies in the border hills, some of the refugees who have settled in Thailand fear a peace might also be catastrophic.

Sob Moei is a collection of 90 houses built by Karen refugees on a bend where the Salween enters Myanmar. Its people fish, grow crops on small patches of land, and forage in the surrounding jungle. Solar panels power a few light bulbs and a public telephone linked by satellite.

Now they feel their haven could soon be taken away, for downstream at Hat Gyi, Myanmar, a consortium consisting of China's Sinohydro, the Electricity Generating Authority of Thailand, and the Myanmar government plan to build a 1,360-megawatt hydroelectric dam under a 2013 agreement that would provide most of the generated power to EGAT.

"Even [if is] 47km from here, it will raise the water level and cause floods," said Yaebue Samajitphol, a local resident who lives in a home built from roughly cut teak beams, bamboo-slat flooring and corrugated-cement roofing. "We stay here without any land title. If there is a flood, it will cause compensation problems. We have no land to move to."

With advice from Laofang Bundidterdsakul, a young Thai lawyer based in the northern city of Chiang Mai, the Karens at Sob Moei are resisting pressure from the consortium and the Thai government to consent to the dam. "Sometimes the [Thai] government and the [consortium] companies come here to get us to sign something," Samjitphol said. "It's some consultation that the law requires. We always say we will never agree and sign anything." 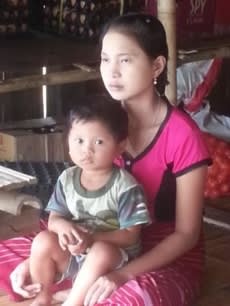 A Karen woman and her daughter at the Sob Moei landing on the Salween.   © HAMISH McDonald

The situation in Sob Moei is just one example of the threats to small local communities, mainly consisting of ethnic minorities, from hydro dam schemes across mainland Southeast Asia.

In northern Vietnam, the 250-megawatt Trung Son hydro dam, a showpiece for the World Bank that provided a $330 million loan, is approaching completion by mid-2017. But according to a report by an independent consultant engaged by the developers to meet World Bank standards -- seen by the Nikkei Asian Review -- most of the displaced people are still waiting on promised compensation and relocation assistance.

People familiar with situation say the monitors, VICA Consultants International, feel  outside pressure, including from  Vietnam Electricity and provincial authorities, to provide a more "balanced" view. "This translates into discounting the complaints and grievances of people affected by this project," said a person with knowledge of the project.

While such big dam projects will inevitably cause immediate disruption to upland communities, they are seen by a host of environmental non-governmental organizations, like International Rivers and the World Wildlife Fund, as also posing a long-term threat to food supplies for vast populations downstream.

Until recently, concerns focused on dam building on two of the other great rivers flowing south out of China's Tibetan plateau, the Mekong and the Irrawaddy. After building cascades of dams on the upper reaches inside China, Chinese companies, together with Thai and Malaysian engineering groups, have been active in pushing hydro schemes in neighboring countries downstream.

A giant Chinese joint venture dam on the Irrawaddy River at Myitsone in Kachin State, the scene of clashes between the Myanmar armed forces and the insurgent Kachin Independence Army, sparked a backlash in Myanmar against dependency on China in 2011. Freezing construction of the dam provided a strategic pivot for the government to reach out to Western countries. Plans for the dam project had been agreed years earlier between Myanmar's then-military government and China.

Along the Mekong River, a plan by Laos to turn the landlocked and impoverished country into the "battery of Southeast Asia" with the construction of nine dams has created tensions with Vietnam and Cambodia as well as with local communities. Some experts warn that the ambitious plans threaten to block sediment flow and "fish migration" and could sharply reduce fish stocks in Cambodia's Tonle Sap lake region and rice yields in Vietnam's Mekong Delta.

Responding to these concerns is becoming expensive. For example, the Thai construction company and majority project partner CH. Karnchang was awarded an extra 19 billion baht ($54 million) contract in May to modify the half-completed dam at Xayaburi, Laos to improve earthquake resistance, navigation locks, fish passageways and sediment flushing. 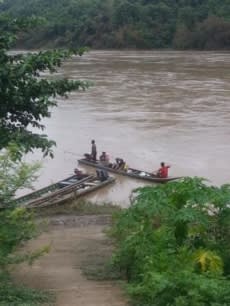 Riverboats on the Salween.   © HAMISH McDonald

Downstream at Don Sahong, where the Mekong breaks into multiple islands, scenic rapids and waterfalls before flowing into Cambodia, Laos is causing deep resentment with its neighbor by building a dam across the main channel. It is trying to allay concerns by blasting the rapids to create a wider side channel for fish and sediment flows.

Adding to the controversy are doubts whether previously isolated governments like Laos and Myanmar have the negotiating skills and background to get proper returns on power sales to Thailand and China. Most of the contracts are secret, but some diplomats say the prices are far too advantageous to the buyers and are guaranteed for too long.

Attention now has turned to the Salween. The Hat Gyi dam is one of five planned along the river, with two others being in Myanmar's Shan State and two across the river border with Thailand. The largest dam, at Mong Ton in southern Shan State, is a giant 242-meter high structure with a projected power output of 7,100 megawatts.

There are reports that China's Three Gorges Corp., which completed the controversial dam on the central Yangtze River in the early 2000s, will hold 40% equity and construct the dam, which would a create a large reservoir stretching far back through the Shan State and flood scores of villages. The other partners would be EGAT, also with a 40% stake, and the Myanmar government with 20%. About 90% of its generated power would go to China and Thailand.

Shan organizations have raised concerns and protests about Mong Ton in the last two years, as an Australian consultant, Snowy Mountains Engineering Corp., carried out an environmental and social impact study. 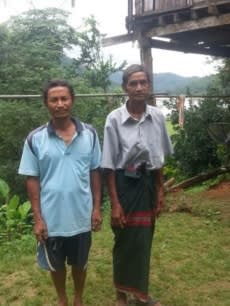 Karen settler Yaebue Samjitphol (right) with his son Jo, at their house in Sob Moei. “Our life is the river and the land,” he says.   © HAMISH McDonald

During her visit to China, Suu Kyi said she would seek a resolution of the impasse on the Myitsone project. Shan groups fear the Salween projects could be offered as compensation to Beijing if the Myitsone dam is abandoned. "While all eyes were on the Irrawaddy-Myitsone dam, Burma has quietly sold off the Salween to China," Sai Khur Hseng of the Shan Sapawa Environmental Organization recently told a press conference in Bangkok. "We fear there has been a trade-off."

All the Salween dams inside Myanmar are located in areas contested by armed ethnic groups such as the Karen National Union and the Shan State Army-South, which currently oppose the projects. Resolution of such issues will undoubtedly be a factor in any peace agreements resulting from Suu Kyi's recent push to initiate and build on talks with ethnic organizations.

At Sob Moei, Saing bought two large catfish to take home before we headed back up river, plus a bottle of the local whiskey to give to a Thai border post on the way. Samajitphol, the Karen refugee, bid us farewell with the comment, "Money cannot buy life. Our life is the river and the land."