The National Diet building in Tokyo. Lobbying groups are especially important to foreign businesses, smaller companies, startups and others that do not have the resources to devote to government affairs.
RIEKO MIKI, Nikkei staff writerMarch 20, 2019 14:00 JST | Japan
CopyCopied

TOKYO -- Ten or so young politicians from Japan's ruling party were listening to a professor speak about the benefits of using bioethanol to power vehicles. When he finished, they peppered him with questions about his report -- "Can biofuels be used for things other than vehicles?” "How effective will this be in reducing CO2 emissions?"

The lawmakers were gathered in Tokyo's political district for the ponderously named "Lawmakers discussion group for encouraging economic growth through decarbonization."

Also present was a member of the Japan Public Affairs Association, a lobbying group that had collected requests from businesses interested in environmental issues and helped the professor prepare his report.

Such groups are still relatively new in Japanese politics.

Traditionally, businesses and other organizations tried to influence public policy by making personal, behind-the-scenes appeals to powerful bureaucrats or politicians who are well-acquainted with the issue at hand.

But now lobbyists act as middlemen that enable people with common interests to leverage the knowledge of scholars and other experts to try to nudge policymakers their way. By taking part in study sessions and similar gatherings, they hope to see their priorities reflected in national policy. 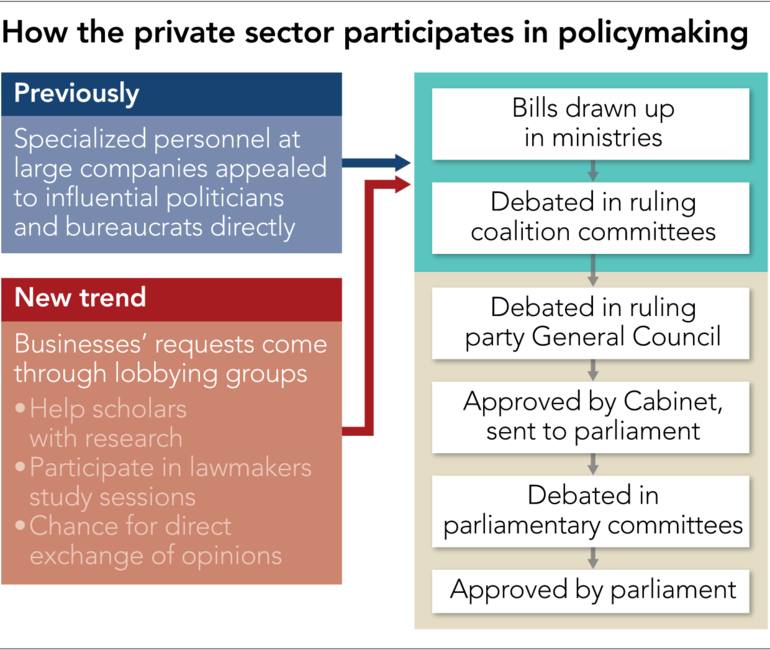 Lobbying groups are particularly important for foreign businesses, small and midsize companies, startups, and other organizations that do not have their own employees dedicated specifically to government affairs.

Often lobbies provide a chance for these groups to engage directly with public officials. The same group that was spreading the word about bioethanol held another discussion on information technology on Feb. 27 with a high-ranking official from the Cabinet Secretariat -- the body that crafts longer-term strategy. Businesspeople from all different sectors came to hear about the government’s new IT strategy.

The group had already met nearly 20 times, providing a chance to directly exchange views with politicians and bureaucrats involved in drawing up policy. Attendees listen to a presentation about the government's IT strategy at a February gathering.

Lobbyists have had some success in getting their agendas put into action. Parliament last year passed revisions to a fisheries law. The changes sought to prevent overfishing by encouraging more companies to move into aquaculture. It was a victory for companies that wanted more incentives to get into the industry.

GR Japan, a Tokyo-based public policy consultant, held multiple discussions about the bill with lawmakers and industry officials from 2016 to 2018. It also organized an international symposium on aquaculture with lawmaker Shigeru Ishiba, previously a contender for Japan’s premiership, and relevant bureaucrats.

GR Japan President and CEO Jakob Edberg said it is necessary to create a common understanding of policy if it is to run smoothly.

This style of lobbying spread when the Democratic Party of Japan took power in 2009. Companies that had cultivated extensive networks among the long-ruling LDP suddenly found themselves without a direct connection to those making public policy.

When the LDP returned under the leadership of Prime Minister Shinzo Abe in 2012, the new method stuck. Abe has centralized decision-making in the prime minister’s office, so some think a coordinated push on social issues is more effective than individually appealing to many different lawmakers who may not have much direct influence.

The change is providing political access to a diverse array of new voices that want to see their priorities show up in Japan's public policy.