Voters cool to both President Tsai's DPP and opposition KMT TAIPEI -- Candidates for November's islandwide local elections in Taiwan on Nov. 24, began filing paperwork on Monday. The vote will serve as a litmus test for the next presidential election, scheduled for 2020.

It is certain to be a tough race for the ruling Democratic Progressive Party, with President Tsai Ing-wen's administration losing support. Voters appear unhappy about infighting in the party and growing pressure from China. Despite its travails, however, the DPP's biggest rival, Kuomintang, has yet to capitalize.

The outcome of the tug of war between the pro-independence DPP, and the pro-China Kuomintang, or Nationalist Party, may have a profound effect on the regional balance of power.

The November elections will fill around 11,000 elective offices, including mayoralties of 22 cities -- Taipei and five other special municipalities among them -- as well as councilors and heads of villages and neighborhoods. The results will be announced on election day.

The focus of attention is on the 22 mayoral contests. In the previous local election, in November 2014, the DPP more than doubled its representation in mayors' offices to 13 from six, while the number of KMT mayors fell to six from 15. The DPP's triumph in that election helped propel Tsai to the presidency 14 months later, in early 2016, ending eight years of KMT rule.

Although DPP hopes to hold on to its seats, it is likely to suffer a setback in the northeastern county of Yilan and elsewhere. A survey in July by the Taiwan Public Opinion Foundation underscores the ruling party's uphill battle. Support for the DPP stood at 25.2% in July, about half what it was when Tsai took office. The share of voters saying they do not support any party rose to nearly 50%. The KMT continues to trail, with the support of 20.7% of voters.

The Tsai administration faces opposition from vested interests over changes to labor laws and pensions. Although the economy is doing fairly well, with offshore wind farm projects and other industrial policies bearing fruit, the government is still grappling with structural issues, such as income inequality and low wages among Taiwanese youth.

Increasing pressure from China, which is trying to throw Tsai off balance, is also a concern. The Central American nation of El Salvador last Tuesday cut diplomatic ties with Taiwan in favor of Beijing. Tsai complained of Chinese intervention at a party meeting on Thursday, saying it was aimed at influencing the election. But China's strong-arm tactics could backfire, encouraging voters to rally to the DPP.

Wu Den-yih, head of the KMT, speaking at a party congress on Aug. 19, accused Tsai of "betraying her promise to maintain cross-strait peace and grow the economy." Wu drew an unfavorable contrast between Tsai and her KMT predecessor, Ma Ying-jeou, who, he said, fostered dialogue between Taiwan and China.

But voters have previously been skeptical that moving closer to Beijing will benefit them. Perceptions that the KMT was overly cozy with China were a major factor in its defeat in the 2016 presidential election. It is unclear whether the party's pro-China stance will prove more popular this time around. 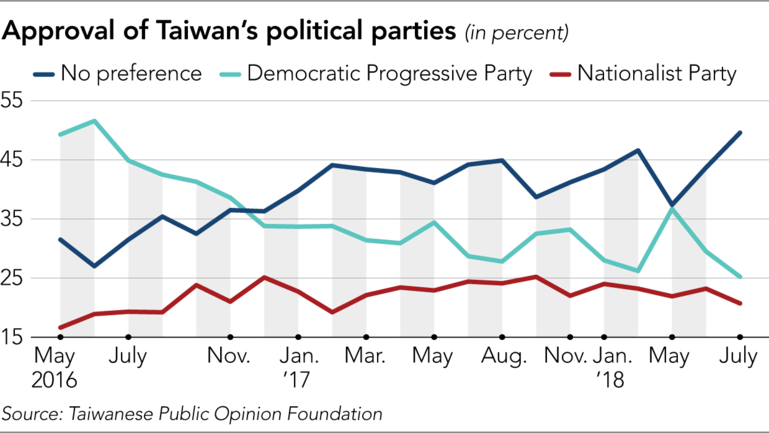 The KMT has criticized Tsai's economic, social and other policies. But so far that has failed to translate into higher poll numbers. One 55-year-old woman who supports the opposition party complained that its stance of "making every effort to oppose the ruling party, apparently in an attempt to take advantage in the election, is no different from what Tsai's DPP did in opposition."

As it struggles to connect with voters, the KMT is trying to stir up anti-Japanese sentiment. In 2011, Taiwan banned food imports from five Japanese prefectures, including Fukushima, following the meltdown of the Fukushima Daiichi nuclear power plant that year. Tsai plans to lift the ban, but the opposition is working to block the move and calling for local referendums on the issue.

In addition, earlier this month, the KMT put up the island's first statue commemorating the suffering of "comfort women," who were used by the Japanese military during the war, on party property in the southwestern city of Tainan.

Both parties are mulling future presidential candidates, though Tsai will likely seek a second term. Waiting in the wings for the ruling party is former Tainan Mayor Lai Ching-te, but he was appointed prime minister last September and would have a hard time presenting himself as a fresh alternative to Tsai.

The KMT, meanwhile, faces a dearth of talent. Wu comes across as an old-school politician, while Eric Chu Liluan, mayor of New Taipei City, lost to Tsai in the 2016 election. Some are speculating that Ma may run again.

One potential dark horse is Ko Wen-je, a doctor-turned-politician who is mayor of Taipei and is popular with voters. But as an independent he would have a hard time running for president without the backing of a big party.

If the KMT wins the presidential election in 2020, Taiwan will undoubtedly veer back in Beijing's direction. That would have a big geopolitical impact elsewhere in Asia.