JAKARTA -- Indonesia's first-quarter slowdown caught many by surprise. Growth in the country's real gross domestic product decelerated to 4.92% on the year in the January-March period -- well short of the forecasts of 5.1% to 5.3% and down from the previous quarter's 5.04% expansion.

Expectations had tipped heavily toward a continued expansion on the back of infrastructure investments promoted by the administration of President Joko Widodo.

Officials are blaming the disappointing result on local government "disloyalty" toward the central government.

On May 11, Widodo called provincial governors and other local government officials to the Presidential Palace in Jakarta. Dropping his usual poker face, the fired-up leader exhorted them to, "Immediately disburse your budget appropriations!"

The rare flash of anger took them aback.

That money was supposed to have been pumped into infrastructure investments and other projects aimed at propelling Indonesian growth. Instead, it piled up in the local governments' bank accounts, and that, says Jakarta, is why the brakes were so suddenly slammed on the economy.

The growth figure of less than 5% had the Widodo administration doing a double take, because government and private sector economists alike were expecting at least 5%.

An analysis of real GDP data for the first quarter shows that limp government spending -- up just 2.93% on the year -- was a key factor behind the slowdown. While government outlays accounted for about 10% of GDP in 2015, the ratio dropped to 6.8% in the first quarter this year.

The reason for the slowdown becomes all the more clear when considering that consumer spending and private-sector investment remain so robust.

The decentralization of political power is major culprit behind the hoarding of central government money in the provinces. Local leaders have been accorded so much authority that they can choose not to implement a particular infrastructure development project even if told to do so by Jakarta. And even if they decide to launch a project, it is often accompanied by much foot-dragging, as many local officials are from the opposition camp.

Acutely aware of this, Widodo threatened to cut budget appropriations for local governments that do not funnel money toward infrastructure development, or force them to buy government bonds. 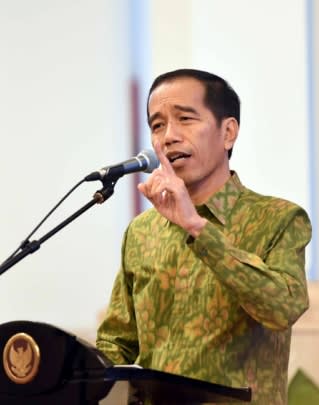 President Joko Widodo urges local government chiefs to quickly spend their budget appropriations, at the Presidential Palace in Jakarta on May 11. (Courtesy of the Office of the President of Indonesia)

Local governments argue that the reason the money is not being spent is that bidding procedures have become more complicated due to strict oversight by the Corruption Eradication Commission, also known as the KPK.

In Indonesia, construction deals have often been awarded to contractors that have close ties with local government officials. Defenders of that practice say it leads to smoother implementation. But a corruption crackdown spearheaded by the KPK has put bureaucrats and contractors on alert, leading to fewer participants in bids. Local government officials say that is why fewer infrastructure projects are moving forward.

Their claim has echoes of developments in China, where President Xi Jinping's vigorous anti-corruption campaign -- which also has bureaucrats on their heels -- has played a role in crimping the economy.

Not the whole story

But most Indonesians are not fully buying the claims by local officials that their hands are tied.

The bulk of Indonesian banks maintain interest rates of about 6% on deposits. That means local governments can generate huge interest revenue by simply holding onto money received from the central government.

There have been rumors of local governments using bank deposits to raise off-the-book funds for senior officials and pay allowances to rank-and-file workers.

A string of corruption scandals involving provincial governors have come to light in recent years. The KPK has busted 56 local government chiefs over the past decade, which has made the public especially watchful for wrongdoing.

Decentralization has steadily advanced across the archipelago since 1998, in response to the excessive centralization of power during the regime of President Suharto. With their enhanced power to provide administrative services for residents, local governments have undeniably helped promote democracy in the Southeast Asian nation.

But there have been negative side effects, too, including delays in implementing infrastructure and other projects led by the central government. The irony is that while widespread corruption must be dealt with, the rigorous crackdown may be generating adverse effects as well.

Now that the GDP slowdown has shed new light on these problems, the country needs to review its model for healthy growth, including the balance of authority, because policy decisions by the central government alone are not enough.