TAIPEI -- Macao announced Wednesday it would follow Hong Kong in closing its representative office in Taiwan, an abrupt move that comes amid heightened tensions across the Taiwan Strait.

"The Macao Economic and Cultural Office in Taiwan will temporarily suspend operations from June 19," the Macao SAR Government said in a brief press statement, without providing reasons for the office closure.

The sudden suspension came right after China on Tuesday sent 28 military aircraft, including fighter jets and nuclear-capable bombers, into Taiwan's air defense identification zone -- its biggest ever daily incursion. Macao's move also comes just two weeks before the 100th anniversary of the formation of the Chinese Communist Party and the 24th anniversary of the handover of Hong Kong from the U.K.

"The Taiwanese government has always done its best to assist the Macao Economic and Cultural Office in Taiwan since it was established in 2011. We strongly regret that the Macao government made this decision unilaterally," the council said in a statement.

"Taiwan's office in Macao will continue to operate, and personnel stationed in Macao will keep doing their job to offer services to Taiwan and Macao people to ensure people's rights and benefits," it added.

In May, Hong Kong also abruptly shut its operation of the Hong Kong Economic, Trade and Cultural Office in Taipei. The Hong Kong government accused Taiwan of "grossly" interfering in Hong Kong affairs on repeated occasions, leading to irretrievable damage.

There also was a rare mention to the controversial "1992 Consensus" in the Hong Kong government's press release on its relations with Taiwan. The notion is an ambiguous political understanding held by the Communist Party and the Taiwanese opposition Kuomintang, referring to an idea that both sides of the Taiwan Strait are part of "one China," but leaving room for each side to interpret its meaning. Taiwan's ruling Democratic Progressive Party does not acknowledge such consensus.

"It is an indication that economic and social exchanges between Taiwan and Hong Kong could no longer be treated without touching upon politics," Toru Kurata, a politics and law professor at Rikkyo University in Tokyo, told Nikkei Asia.

Before the pandemic struck in 2019, a flight connecting Hong Kong and Taipei was the second busiest international flights in the whole world, after only the Kuala Lumpur-Singapore route.

"There should be a relationship in place as not to obstruct human interactions between such closely-connected regions, but that is now becoming difficult," said the scholar who specializes in Hong Kong and Chinese politics. "I must say this an abnormal situation." 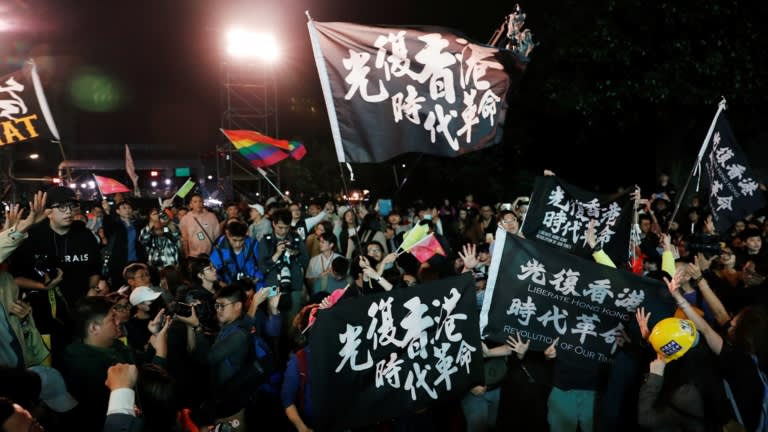 Democratic-ruled Taiwan, which China sees as a wayward province and has never given up the option to take it over it by force, has been supportive to the democratic movement in Hong Kong. Taiwanese President Tsai Ing-wen has condemned the arrest of Hong Kong democratic activists, voiced support to Apple Daily founder and activist Jimmy Lai, and in March criticized China for breaking its political promise of "One country, Two systems" by changing the Hong Kong electoral system.

Following the weekend's Group of Seven summit, the club of rich democratic nations issued a statement pointing to the "importance of peace and stability" across the Taiwan Strait.

The statement also urged China to respect human rights and fundamental freedoms, pointing to the issues in Hong Kong and the treatment of Uighur Muslims in Xinjiang. China angrily denounced this as a "baseless accusation" and called on other countries to stop interfering in its internal affairs.

Taiwan's presidential office praised the statement, calling it a "force for good" adding that "Taiwan will certainly adhere to its role as a responsible member of the region, and it will also firmly defend the democratic system and safeguard shared universal values."

After Tuesday's incursion, Beijing said it does not tolerate foreign forces intervening in Taiwan issues and has to make strong responses to such acts of "collusion."

"We will never tolerate attempts to seek independence or wanton intervention in the Taiwan issue by foreign forces, so we need to make a strong response to these acts of collusion," said Ma Xiaoguang, spokesman for China's Taiwan Affairs Office.

US Indo-Pacific commander admiral John Aquilino said in March at a U.S. Senate hearing that the threat of China invading Taiwan is "closer than most think." The admiral did not give a timeline but said the risk is growing faster than many had expected.

Taiwan Foreign Minister Joseph Wu downplayed the threat but said Taiwan needs to be ready. "We don't really anticipate that a conflict, or a war is going to break out anytime soon, but we are trying to get ourselves ready, whether the war is going to take place tomorrow, or six years later, or 10 years later, we need to prepare ourselves," he said.