BANGKOK -- Malaysian Prime Minister Mahathir Mohamad voiced his government’s rejection of gay rights in a lecture he gave to university students in Bangkok on Thursday.

"At this moment, we don’t accept LGBT," said the 93-year-old to students of one of Thailand’s top institutions, Chulalongkorn Univeristy, referring to lesbian, gay, bisexual and transsexual communities. He said that LGBT rights were incompatible with the "institution of marriage and institution of family."

Sodomy is still a crime in Malaysia, where the dominant religion is Islam.

"Sometimes Asians accept western values without questioning," the prime minister warned. "We should be free not to change our values according to their wishes."

This is not the first time Mahathir has blamed so-called western values. During the Asian financial crisis that started in 1997, he blamed western-style capitalism and traders for worsening the situation. He preached the importance of sticking to Asian values to the students.

"We give poor people opportunities to do business and to get [an] education, so that they can catch up with the richer community," said the prime minister, when he was asked if he would dismantle Malaysia's Bumiputra policy, a set of measures designed to lift the social welfare of the majority ethnic Malays. The policy grants a wide range of privileges -- from scholarships to access to government contracts -- based on ethnicity rather than merit.

"If we don’t do that, the disparity will get wider and wider over time, and it will lead to a conflict," he added. But his handpicked advisers have recommended changes to the policy, introduced in 1971, as part of government plans to spur competitiveness. 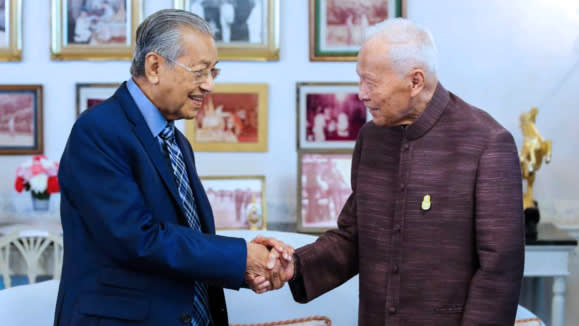 Earlier on Thursday, Mahathir visited Prem Tinsulanonda, the 98-year-old former prime minister of Thailand, a long-time acquaintance. Mahathir became Malaysia's premier for the first time in July 1981 during Prem's reign of 1980 to 1988.