KUALA LUMPUR -- Malaysia's ruling Pakatan Harapan, or Alliance of Hope coalition, appears to have a clear transition plan, with both Prime Minister Mahathir Mohamad and his likely successor, Anwar Ibrahim, repeatedly stating that the premiership will pass from Mahathir to Anwar on "an agreed timeline."

But Mahathir's appointment of Latheefa Koya as head of the Malaysian Anti-Corruption Commission has raised eyebrows. Although Latheefa is a member of Anwar's People's Justice Party, which goes by the Malay initials PKR, she is a fierce critic of Anwar and his family. Mahathir's move is seen by many as "Game of Thrones"-style intrigue.

Harapan leaders and political observers are now casting more doubt on whether Anwar will be given the opportunity to lead the country before the next election, which is due in 2023. Anwar was dismissed from an earlier Mahathir government in 1998 over sodomy and corruption allegations. Sodomy is illegal in Malaysia.

Latheefa, the first woman to lead the anti-graft agency, was a surprise pick to many, including ministers and ruling party leaders.

Mahathir appointed Latheefa, a lawyer, to the coveted position, which comes with prosecutorial powers, and did so without consulting the cabinet or Anwar. Several ministers have said publicly that Mahathir did not discuss the decision. 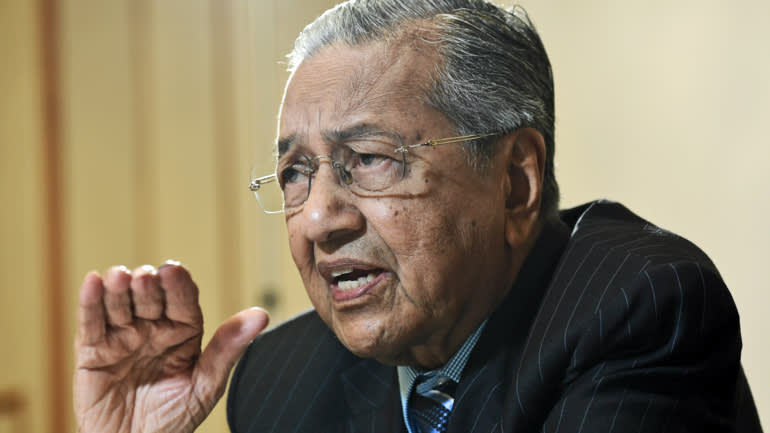 Prime Minister Mahathir Mohamad, seen here in 2018, told reporters that choosing Latheefa was his prerogative as the prime minister, thus he did not need to discuss it with anyone.

Mahathir told reporters Wednesday that Latheefa's selection was his prerogative as prime minister, and that he did not need to discuss it with anyone. But this runs contrary to the government's election manifesto, which promised that future public appointments would be examined and approved by a parliamentary committee.

Mahathir's apparent change of heart has left political observers puzzled. Latheefa was once Anwar's attorney. She now accuses him of cronyism and nepotism in his appointments of PKR state-level leaders during his time as the party's president.

Speaking to the media on Thursday, Anwar said Mahathir needs to clarify the reasons for Latheefa's appointment, and why he and the cabinet were not consulted. Anwar argues that the pick was not in line with a law governing the commission and violates the Pakatan Harapan election manifesto.

"The manifesto was not complied with and [the choice of Latheefa] is seen as a political appointment. ... I find it necessary [for Mahathir] to explain the issue to the public [and] why the manifesto was not fully observed and respected, although I think Latheefa has the necessary credentials for the position," Anwar said.

Mahathir, who groomed Anwar as his successor during his first stint as prime minister between 1981 and 2003, later declared him incapable of being Malaysia's leader. That was labeled a political vendetta by human rights organizations and world leaders, including former U.S. Vice President Al Gore.

After leading a campaign against Mahathir from prison and founding the PKR, which was headed by his wife and current Deputy Prime Minister Wan Azizah Wan Ibrahim, Anwar's sodomy conviction was overturned in 2004 -- a year after Mahathir stepped down as prime minister.

Wee Ka Siong, a former minister and leader of the opposition Barisan Nasional, or National Front coalition, told the Nikkei Asian Review he is concerned about the appointment. Wee said that aside from not honoring the government's election promise, Latheefa's selection is "fishy," given the secrecy surrounding the process.

"I feel disturbed for Anwar, as it is well known that she has always targeted him. I hope her appointment is not some grand conspiracy scheme to stop Anwar from becoming the next prime minister," Wee said, adding that the appointment, which runs for two years, does not augur well for the succession plan.

Pakatan Harapan lawmaker and deputy chief minister of the northern state of Penang, P Ramasamy Palanisamy, told Nikkei that Latheefa is well qualified to head the commission but that politics could overshadow her balanced approach.

He confirmed that there is talk on the Malaysian political scene that her appointment has nothing to do with the government's fight against corruption but is aimed at making it harder for Anwar to take over from Mahathir as prime minister.

Ramasamy also pointed to Latheefa's allegiance to the PKR's No. 2, Economic Affairs Minister Mohamed Azmin Ali, who is rumored to be Anwar's main challenger within the party. "I am sure that Latheefa is not a pawn in the new game of politics that might be unfolding. But the fact that she has been critical of Anwar and his family, and is considered close to Azmin, does not rule out the talk that she is being used [as part of] a planned political agenda," Ramasamy said.

Following his release in 2004, Anwar became the leading figure in the opposition and helped bring opposition parties into the now-defunct Pakatan Rakyat, which contested the 2008 and 2013 general elections.

Anwar began a five-year prison sentence in 2015, following a second sodomy conviction involving his personal aide. Human rights groups again called the prosecution politically motivated. However, Anwar received a royal pardon from the Malaysian king and was released in May 2018, a week after the Mahathir-led Pakatan Harapan was swept into power.