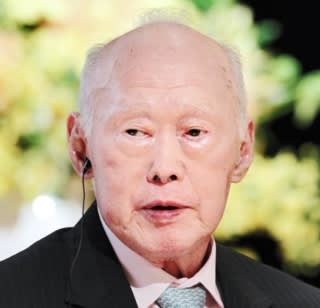 In a blog entry entitled, "Kuan Yew and I," Mahathir said he is saddened by the death of Lee "no matter how friendly or unfriendly we [were]."

Lee, the founding prime minister of Singapore, died Monday at the age of 91. He and Mahathir, 89, are considered instrumental in transforming their backwater economies into modern countries.

In the post, Mahathir recalled that he first met Lee in 1964 as a member of parliament and that the two men "crossed swords many times during the debates."

Singapore joined Malaysia for a brief period before being expelled in 1965. Malaysian government policy has long given the country's Malay-majority preferential treatment when doling out scholarships, job opportunities, home-purchase subsidies and other benefits. Lee advocated for equal opportunity for all, regardless of race.

Both statesmen continued to clash with each other even after they became prime ministers of separate countries. Lee ruled Singapore from 1965 to 1990, and Mahathir ruled Malaysia from 1981 to 2003.

Mahathir used to complain that water supply agreements with Singapore were lopsided, with Lee shooting back that the prices Singapore paid to Malaysia were enshrined in preseparation contracts.

The two put aside their bickering once, in 1981, Mahathir recalled in his post, when Malaysia and Singapore agreed to push forward their clocks by 30 minutes so that both countries would fall into the same hour time zone.

"I am afraid on most other issues we could not agree," Mahathir confessed. Lee Kuan Yew, left, poses with Mahathir Mohamad at The Nikkei's Future of Asia conference in Tokyo in 2012.

Yet, despite the rivalry, both leaders cared for one another, especially when they were not well. Mahathir said Lee offered him a heart surgeon when he needed open-heart surgery in 1989, though the offer came too late to be accepted.

Both men tried to catch up with each other in 2012 during an encounter in Tokyo, where both attended The Nikkei's Future of Asia conference.

Mahathir views Lee's death as the end of an era. "His passage marks the end of the period when those who fought for independence led their countries and knew the value of independence," he wrote.

In a letter of condolence to Prime Minister Lee Hsien Loong on Monday, Mahathir noted, "It is with deep regret that my wife and I received the news of the demise of your beloved father, Mr. Lee Kuan Yew, this morning."