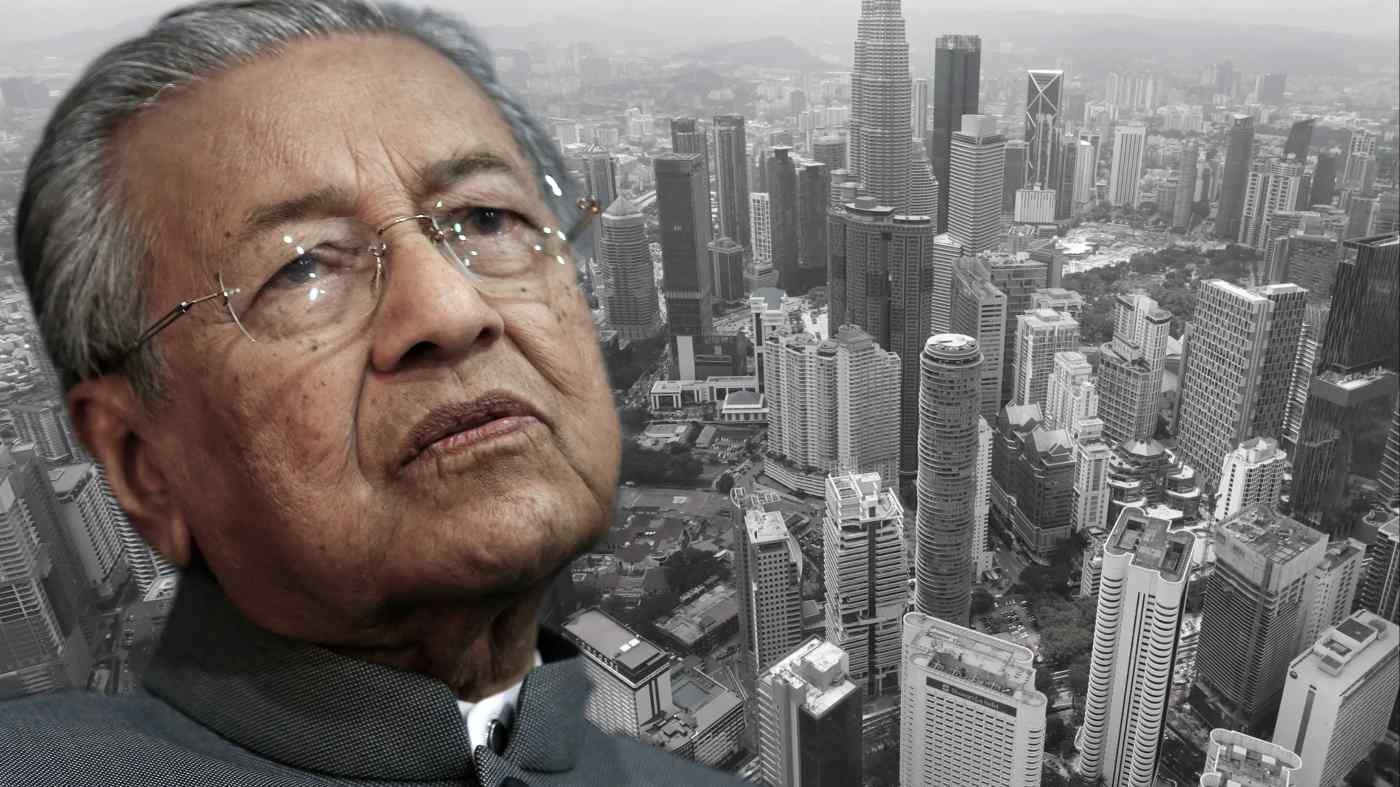 KUALA LUMPUR -- A shopping mall at the foot of Kuala Lumpur's iconic Petronas Twin Towers has recently lost one of its two department store tenants.

Parkson Holdings, a local department store chain, closed the three-story 12,000 sq.-meter store in February after two decades of operation. Like many other traditional retailers, Parkson faced stiff competition from modern malls and e-commerce. The company noted in its financial statement for 2018 that it needed to transform its business as global economic and market uncertainties make its operating environment "challenging."

A year on from general elections that led to Malaysia's first regime change since it gained independence in 1957, the euphoria has died down and reality is starting to bite. Slowing economic growth is becoming a problem for the government led by Prime Minister Mahathir Mohamad.

Parkson's closure at the Twin Towers mall reflects Malaysia's economic malaise. The country's consumer sentiment index dropped for the third quarter in a row in the January-March period, data from the Malaysian Institute of Economic Research showed.

"This could possibly suggest some weakening in private consumption growth in the coming months," Singapore's DBS Bank noted in a recent report. Consumption is a key driver of the Malaysian economy and a weakening in consumer sentiment does not bode well for gross domestic product.

In May last year, public discontent with the corrupt government led by Najib Razak spurred 93-year-old Mahathir to emerge from retirement and return to front-line politics. He led then-opposition coalition Pakatan Harapan (Alliance of Hope) to a historic election victory. As promised during the election campaign, the new government immediately tackled the source of the corruption, arresting and charging Najib and other figures involved in the troubled state fund 1Malaysia Development Berhad. Najib's trial started in April.

Riding on a wave of election euphoria, Mahathir's approval rating surged to 83% last May, according to a poll by independent research firm Merdeka Center.

But in its latest survey in March, the prime minister's approval rating had almost halved to 46%. The poll showed that more people were unhappy with his government's economic management (52%) than those satisfied (40%) for the first time since Mahathir took office. There was "a heightened expectation [where] people expected that with the new government, their life would change considerably [for the] better in the coming months," said Cassey Lee, senior fellow at Singapore's ISEAS-Yusof Ishak Institute. "But when you look at the government, revenue has been weakening." Lee also pointed to the government's diminishing capacity to deal with boosting its coffers.

Pakatan Harapan's election manifesto included a wide range of promises from anti-corruption to fiscal reform, with some policies, such as the abolition of the 6% goods and services tax, seen as populist, vote-chasing moves.

According to the new government's report card by the Institute for Democracy and Economic Affairs issued in April, 29 of 192 promises in the manifesto were on track or had already been achieved so far.

The institute acknowledged that the government had been successful in abolishing GST and improving transparency in its finances, it also pointed out that the government's measures to reduce the cost of living have focused on short term measures, such as subsidies and price control, rather than structural reform to lower prices more sustainably.

Furthermore, analysts said that some of the government's policies are, in fact, detrimental for the economy. "Some fiscal policies have undermined the government's policy effectiveness and its fiscal flexibility," said Anushka Shah, lead analyst for Malaysia at Moody's Investors Service. "Because of this policy choice of GST abolition in particular, steady deficit reduction will be difficult to implement particularly in a weaker global environment."

The replacement of the GST with a new sales and services tax created a revenue shortfall of some 20 billion ringgit ($4.8 billion). Moody's projects that the government's debt burden will rise to 56% of GDP this year, up from 50.7% in 2017. This is significantly higher than the median of Malaysia's peers at 38%.

Malaysia is also not helped by the tensions between Beijing and Washington that have dealt a blow to the trade-reliant economy whose exports-to-GDP ratio stood at 71% in 2017. The trade friction between the superpowers coupled with slowing growth in China have led to a fall in Malaysian exports in February and March from a year ago.

As a result, Kuala Lumpur's benchmark composite stock index is the worst performing major market in the world, falling over 3% year-to-date when other Asian stock indexes were rising. The Malaysian ringgit has remained weak at round 4.1 to the dollar since early April. The Bank Negara Malaysia, the central bank, on Tuesday lowered the policy rate for the first time in nearly three years, citing "downside risks" to growth. 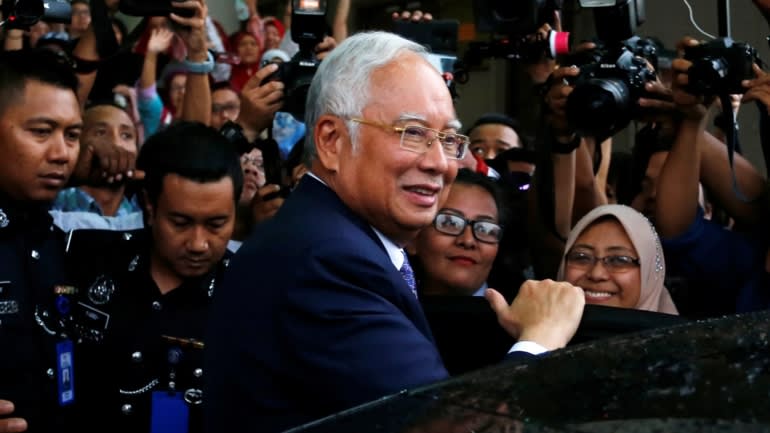 Najib, who is still a member of parliament, has seized on such financial performance to disparage on social media the government's ability to manage the economy. This despite the fact that over 60% of people surveyed were dissatisfied with the Najib administration's economic management in his last few years, according to polls by Merdeka Center.

Anushka of Moody's also pointed that another risk for Mahathir's government lies in the political environment. "The new government is a coalition government comprising many parties," she said. "With the ideologies of the parties not entirely aligned... the ruling coalition could undermine policy effectiveness."

Some Malaysians are willing to give the government a chance to work things out. A 23-year-old woman in Kuala Lumpur said that she did not see an improvement in the economy given that she had difficulties finding a job as a fresh graduate, but she remained patient for change. "The new government did not have strong base. It will improve in time," she said.

Merdeka Center data showed that two-thirds of the voters it surveyed agreed with this sentiment, while 30% disagreed.

Yet, time alone will not help Mahathir's government. Lee of ISEAS-Yusof Ishak Institute said the government needed "new long-term structural policies," such as improving and updating Malaysians' skills to adapt to economic changes, and to enlarge its workforce by attracting competent foreign workers. "There's now a need to move beyond just focusing on short-term stabilization and infrastructure investment," he said.

Mahathir has called for Malaysians to unite for the development of the economy.

"This new government will be one-year-old in a few days," he said in a Facebook post last Thursday. "The government's goal is clearly outlined -- to make Malaysia a developed nation with good environmental and social protection policies, economic inclusion and harmony." He also wrote that boosting productivity and promoting quality investment are among the government's priorities.

"We have come a long way to be where we are today and despite all the challenges we still stand united as Malaysians," he said.