Ruling coalition is likely to win, backed by a solid electoral war chest KUALA LUMPUR -- Malaysia's voters on Wednesday will decide whether scandal-tainted Prime Minister Najib Razak remains in office or if Najib's one-time mentor, former Prime Minister Mahathir Mohamad, gets to remove the "former" from his title.

Many analysts now believe the incumbent will win but with a thinner margin compared to the previous election, in 2013. Momentum has been building since the campaign officially started on April 28 for the Mahathir-led opposition, which entered the fray with a lack of electoral machinery and some tall hurdles to clear.

Among the obstacles: Photos of the 92-year-old Mahathir have been banned from election posters, and his party is currently challenging a temporary disbandment imposed by the authorities that would effectively rule it out of the election.

Mahathir still commands a wide following, especially among traditionally pro-government Malays who, as the largest ethnic group, hold the key to the country's 14th general election.

Here are some of the main questions to keep in mind ahead of the elections.

Who is battling whom?

Najib's ruling coalition, the Barisan Nasional, or National Front, is composed of 14 parties that will face the four parties that make up Mahathir's Pakatan Harapan, or Alliance of Hope. Political parties in Malaysia tend to be ethnically based, which means debates over electoral issues and government policy are often focused on racial or sectarian concerns. 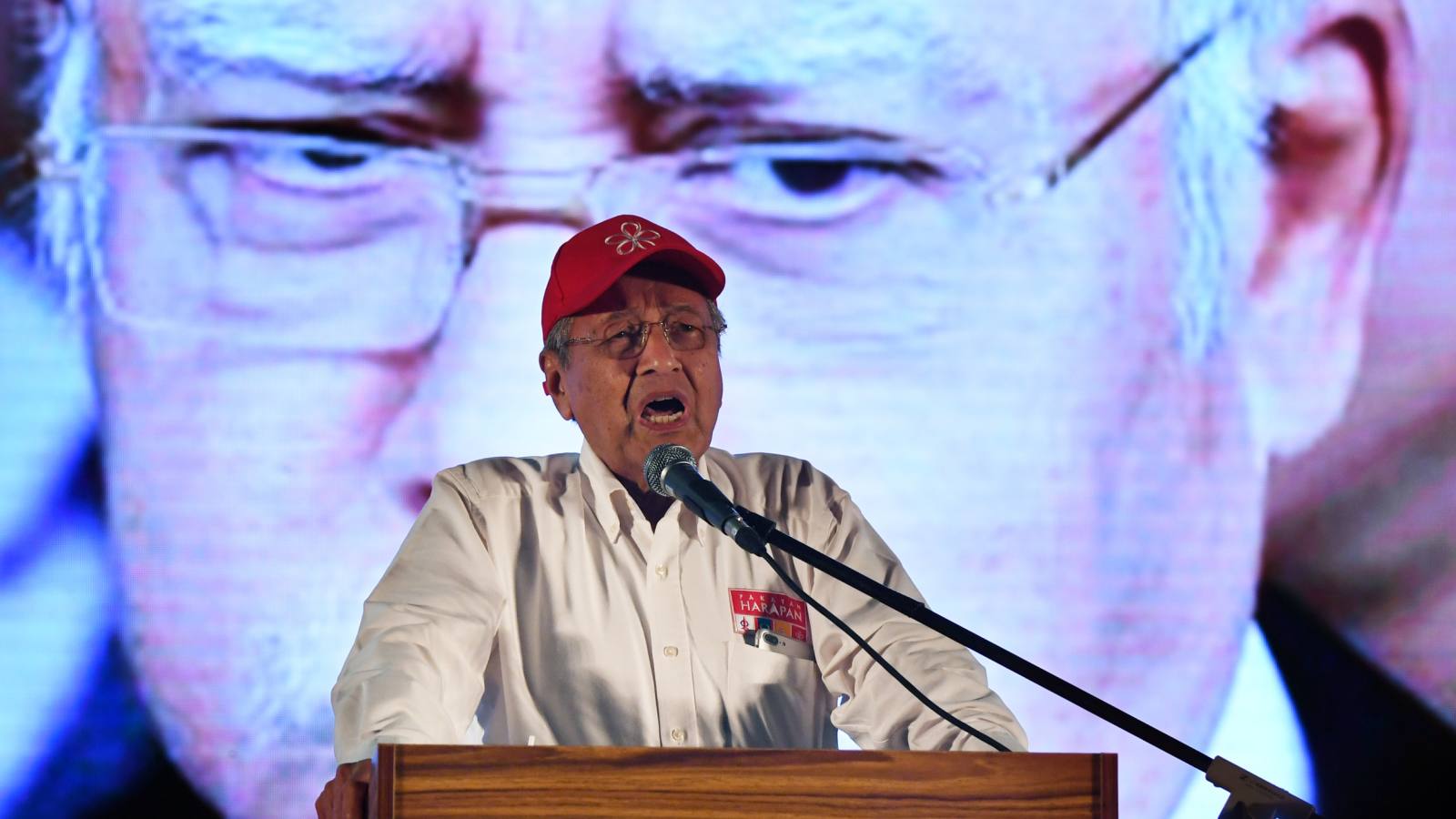 Najib's own party, the United Malays National Organization, or UMNO, is the biggest party. It has over a third of the seats in parliament. In Mahathir's PH, the predominantly ethnic Chinese Democratic Action Party is the biggest, followed by Parti Keadilan Rakyat, or People's Justice Party. The latter is controlled by Anwar Ibrahim, the jailed former deputy prime minister.

The Parti Islam Se-Malaysia, an Islamist party commonly known as the PAS, was previously in opposition but has tilted toward the ruling group after liberal-minded lawmakers broke away to join the PH. The PAS is contesting the elections independently. This three-way fight that may lengthen the odds for the opposition.

Why is the election important?

Najib will use the election to strengthen his electoral mandate. This is critical given that his reputation has been damaged by a financial scandal at the 1Malaysia Development Berhad sovereign wealth fund that he once controlled. He has denied any involvement mismanaging funds at 1MDB, even as associates have become targets of fraud investigations in other countries.

The scandal, which came to light in July 2015, has fueled political attacks by Mahathir and his allies in the opposition. Mahathir came out of retirement to contest his sixth election, in Langkawi, a resort island he promoted and developed during his 22 years in power. He is also the opposition's candidate for prime minister.

Malaysia has been governed by Barisan Nasional since independence in 1957 and has never had a change in ruling parties. An opposition victory would be historic, but might lead to disruptions in government.

What are the main issues?

Although the economy has strengthened since the slowdown in 2013 brought on by weaker commodity prices, many Malaysians are unhappy about the rising cost of living. Prices are climbing, in part due to cuts in government subsidies for essential goods and the introduction of a goods and services tax that was meant to offset the fall in revenue from commodities. Voter sentiment will play a big part in determining the outcome.

People in the countryside, many of whom support the government, appear concerned about financial scandals in state-owned entities like 1MDB and Felda. Confidence in Felda and its listed subsidiary was rocked last year by boardroom tussles and transfers of land ownership without board approval in its associates.

Felda and the subsidiary hire people in rural areas to work on their plantations.

Where are the key battlegrounds?

The opposition draws its support mainly from cities and in the more industrialized states of Selangor and Penang. These states and urban seats will be hotly contested following a redrawing of the electoral map. The opposition claims the change, which affects about 60% of the seats in peninsular Malaysia, will skew the electorate in favor of the ruling coalition.

Johor, a southern state near the border with Singapore and an UMNO stronghold, will be targeted by Mahathir's Parti Pribumi Bersatu, or Malaysian United Indigenous Party, a small outfit made up mostly of Mahathir loyalists brought over from the UMNO. Wresting control of the Malay-majority state from UMNO would give the opposition a much-needed electoral foothold.

The ruling and opposition camps will battle for 222 seats in the national parliament and 505 seats in provincial legislatures in a first-past-the-post voting system inherited from the British colonial government. A coalition can form the government for the next five years with a simple majority, but a two-thirds majority is the big prize. This would allow the ruling group to revise the constitution.

The BN won 133 out of the 222 parliamentary seats in the previous election in 2013, despite capturing only 47% of the popular vote, due to disparities in the size of rural and urban constituencies. The rural areas where the ruling group is stronger comprise the majority of parliamentary seats.

Who is tipped to win?

Pundits are predicting another triumph for the ruling coalition, backed by a solid electoral war chest that allows it to hand out financial aid to poor voters. Najib's group also enjoys strong support among the country's civil servants.

The opposition is hoping for a turnout rate of 85% on Wednesday. High turnouts usually favor the opposition. For the past two weeks, thousands of people have been showing up to the opposition's nightly rallies. When Mahathir speaks, live streams draw big online audiences as well.

The latest study by independent Merdeka Center for Opinion Survey, published on Thursday, says Malays' support for the ruling party fell 1.8%, to 51.2%, from two weeks earlier, while support for the opposition gained 7.8%.

In recent days, veterans of Najib's UMNO have openly criticized the prime minister for mismanaging the country. Former Finance Minister Daim Zainuddin and Trade Minister Rafidah Aziz, party stalwarts who are respected by the Malay community, have been doing so at pro-opposition rallies, further pressuring Najib's National Front.