SINGAPORE -- International investors are fleeing Malaysia, which has been battered by multiple economic headwinds and, as a result, is home to Asia's worst-performing major stock market.

Now weak macro indicators are adding to the challenge faced by Prime Minister Mahathir Mohamad, whose government will enter its second year in May.

According to a Monday report from MIDF Research, a Malaysian financial services provider, foreign investors last week were net sellers of Malaysian stocks for a fourth consecutive week. So far this month, foreign investors' net sales have amounted to 1.14 billion ringgit ($270 million).

This bucks the trend in neighboring equity markets. In Indonesia, foreign investors in the first three weeks of April bought more than $218 million more stock than they sold. In the Philippines, the figure is $121 million, and in Thailand it is $83 million.

Before Monday, The Kuala Lumpur Composite Index was down 4% since the end of last year. During the same period, other Southeast Asian markets improved. Singapore's benchmark index was up 9%, Thailand's 7% and Indonesia's 4%.

One factor dragging down Malaysia is the economy's heavy reliance on trade. Exports accounted for 71% of gross domestic product in 2017, according to the World Bank. Global electronics makers have made Malaysia an export base. In so doing, they have also made it vulnerable when sales of products like semiconductors slump, which is happening right now as the world demands fewer smartphones. 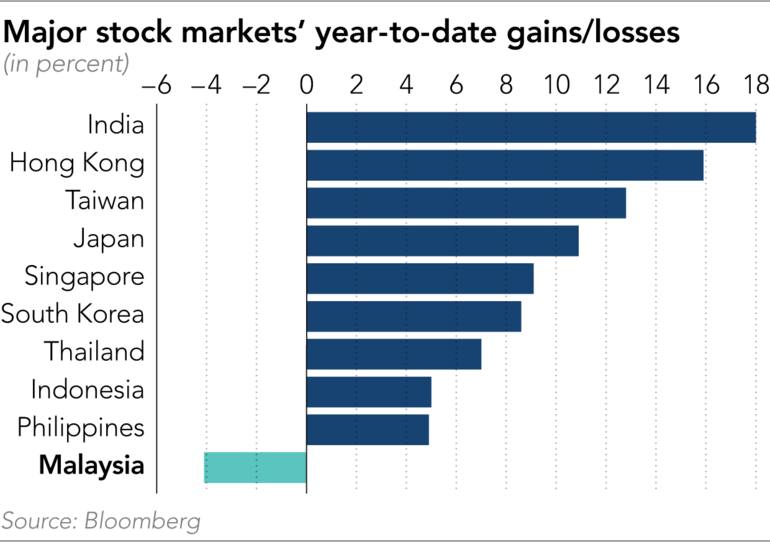 Nikkei's monthly manufacturing Purchasing Managers' Index shows Malaysia has been one of Asia's worst-performing economies. The country's headline PMI pointed to a contraction for a sixth month in a row through March as overseas demand waned. In March, Malaysia's manufacturing PMI was the lowest among the 15 sets of Asian data Nikkei monitors.

Another concern is Malaysia's dispute with the European Union over palm oil, one of Southeast Asia's key export commodities. The EU is moving to ban the use of palm oil in biofuels, citing deforestation.

Although palm oil prices bottomed out late last year, they remain low compared to 12 months ago and have weighed on Malaysian companies that own palm plantations.

According to a calculation by Singapore's United Overseas Bank, funds that track the index are worth a combined $1 trillion, with Malaysia carrying 0.39% of the index's weight as of March. This translates into potential foreign holdings of $3.9 billion, or 4% of all outstanding Malaysian government securities. The "Malaysian ringgit is clearly on the defensive over the near term given this latest news," the bank warned.

In response, Mahathir said, "We have no intention to withdraw from the bond market," according to a New Straits Times report on April 19.

"The central bank will use the current low inflation backdrop to provide more policy stimulus to the economy," according to Prakash Sakpal, an economist at ING, adding that the central bank will cut policy rates by 25 basis points to 3% at the next policy meeting, scheduled for May 7, making it the first rate cut in nearly three years.

As far as foreign direct investment for setting up factories and making corporate acquisitions is concerned, Malaysia had net gains until the October-December quarter going back to early 2013, according to CEIC Data. There is no available data for the most recent quarter.