Tax cuts and 1MDB probe come first, as tougher tasks are pushed back KUALA LUMPUR -- In his first 100 days back in office, Malaysian Prime Minister Mahathir Mohamad has shored up support with broadly popular policies, but many challenges will remain once the initial wave of enthusiasm subsides.

Following a win in the May 9 election, Mahathir returned to the job in Malaysia's first partisan transfer of power since independence. One of his government's first priorities was dealing with the 1Malaysia Development Berhad scandal, which involved the misappropriation of more than $4.5 billion from the state fund.

The government reopened an investigation quashed by Mahathir's predecessor, Najib Razak, and in early July charged Najib with breach of trust and abuse of power. Prosecutors spotlighted the seizure of such items as jewelry and luxury watches from the former prime minister's homes to underscore the corruption in his administration.

On Saturday, Mahathir inspected a luxury yacht believed to have been purchased with money misappropriated from 1MDB. The ship, whose value is estimated at $250 million, was just handed over by Indonesia, where it was moored.

"I have been on yachts before, but nothing like this," Mahathir said. "Everything is superb, and bought with stolen money, by crooks. We'll get the crooks."

On the policy side, the new government has focused on measures to keep more money in the public's pockets, including scrapping the goods and services tax and introducing gasoline subsidies. These steps fulfilled pledges for the administration's first 100 days laid out in the Pakatan Harapan coalition's manifesto, allowing Mahathir to demonstrate his ability to keep promises.

The prime minister's strategy of focusing on quelling public anger stoked by the previous government seems to be paying off so far. A poll conducted Aug. 7-14 by the Merdeka Center for Opinion Research shows 71% of voters approving of Mahathir's performance. Notably, support is strong among civil servants, a key support bloc of the former ruling party, and among young people, many of them unattached to any party. 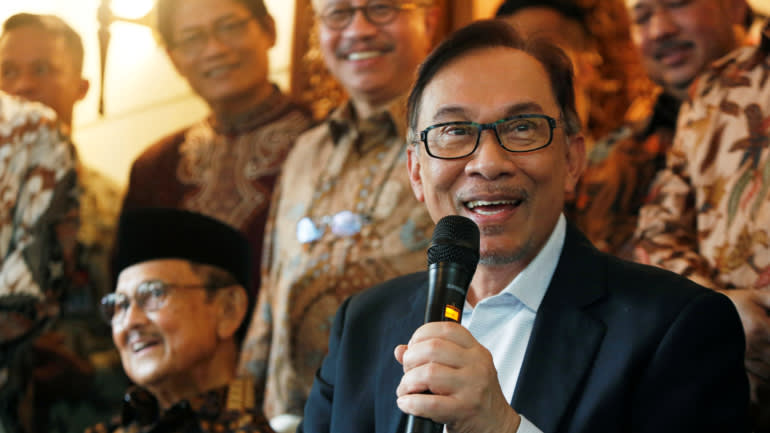 Anwar Ibrahim speaks with the media in Jakarta on May 20.   © Reuters

But the government's popularity-boosting policies may put a heavy burden on Malaysia's budget. The elimination of the goods and services tax will reduce annual tax revenue by 44 billion ringgit ($10.7 billion), even as spending soars with measures like the gasoline subsidies.

"As pressure grows for more populist manifesto commitments to be delivered, the fiscal deficit could come under strain," said Peter Mumford, director of Asia at Eurasia Group.

The first test in this area for the Mahathir administration will be the fiscal 2019 budget proposal due out in November.

Mahathir also faces the challenge of ensuring a smooth transfer of power to his planned successor, former Deputy Prime Minister Anwar Ibrahim. The prime minister, who is 93 years old, said before the election that he would step down after a year or two, but he has hinted recently that he might stay on longer.

The two men have a complicated relationship -- Anwar was Mahathir's deputy prime minister and designated successor in the 1990s, but Mahathir later had him jailed. Any signs of discord with the popular, charismatic Anwar could spell trouble for Mahathir and his government.