SINGAPORE -- Prime Minister Mahathir Mohamad seeks to balance Malaysia's diplomacy rather than follow his predecessor's foreign policy, which was highly favorable to China.

A week has passed since Mahathir's new cabinet began work, and the prime minister is reviewing Malaysia's relationships with other countries, especially regarding economic matters.

This is in line with a campaign promise made by Mahathir's Pakatan Harapan (Alliance of Hope), a coalition of then opposition parties that on May 9 unseated the government of former Prime Minister Najib Razak. The promise was to "review all giant infrastructure projects with foreign countries."

Najib strengthened ties with China, and now Chinese companies are in charge of many big projects in Malaysia. These include the 688km East Coast Rail Link, which will cost an estimated 55 billion ringgit ($13.8 billion). The money will be borrowed, burdening Malaysia, Mahathir said.

Meanwhile, Bai Tian, China's ambassador to Malaysia, has been trying to access key people in the new government. Malaysia, which sits between the South China Sea and Indian Ocean, has geographic significance for China and its globally ambitious Belt and Road initiative. "China always regards Malaysia as an important cooperation partner for the 21st century maritime Silk Road," Bai told Mahathir on May 24, according to the Chinese embassy. "And [China] is ready to promote the Belt and Road initiative together with Malaysia."

China envisions its belt and road as modern-day Silk Road trade routes that will carry Chinese goods and influence to Africa and Europe. 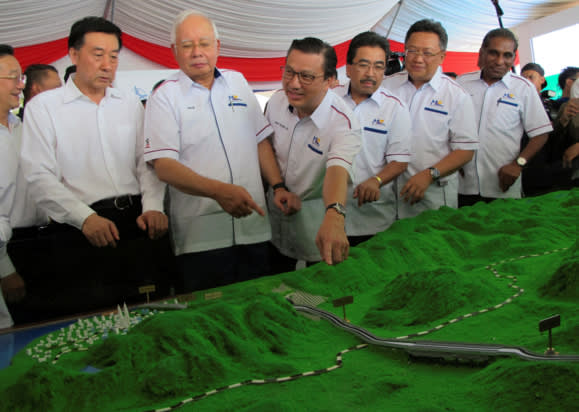 Since voters stunned Malaysia's entrenched ruling party and put Mahathir back into a position he had occupied for decades, the 92-year-old has indicated he will review big projects with foreign countries.

"Mahathir's approach is based on whether a project serves national interest," said Masashi Nakamura, a researcher at Japan's Institute of Developing Economies. "Therefore it is possible that he cancels unprofitable ones."

However, seeking balance does not mean Malaysia is ready to cool its economic relations with China. Beijing is too important, the prime minister has acknowledged.

In a January interview with the Nikkei Asian Review, Mahathir said China would play "a very big role" and that "you can't run away from the influence of China." Soon after the general election, he said he had no problems with the Belt and Road initiative.

Mahathir named Robert Kuok, a Hong Kong-Based Malaysian billionaire who has strong connections in China, as a member of an advisory council to the prime minister, an apparent bid to seek good ties with the world's second largest economy.

On May 23, Kuok and Chinese ambassador Bai met in Malaysia. According to a statement from the Chinese embassy, the men agreed that friendly bilateral cooperation is in the fundamental interests of the two countries and peoples. "They believe that ... Malaysia could further benefit from mutually beneficial and win-win cooperation with China." Meet the 5 brains behind Malaysia's Mahathir-nomics

"As a small country," Nakamura said, "Malaysia's diplomatic basis, creating win-win relationships with many partners, will not change."

Malaysia has a population of about 31.2 million, which pales to China's 1.38 billion.

In the past two weeks, Mahathir has received visits from Singapore prime minister Lee Hsien Loong as well as ambassadors from other nations. He has yet to name a foreign minister.

"This is one ministry that Mahathir can temporarily oversee with great ease and comfort as the dust of the general election settles to provide clarity on the ideal candidate to be Malaysia's chief diplomat," said Tang Siew Mun, senior fellow at the ISEAS-Yusof Ishak Institute in Singapore. "The Mahathir Administration will settle into a 'holding pattern' as far as foreign policy is concerned.

"Mahathir is unlikely to make any major shifts or lay out new initiatives. Instead he will guide Malaysia back to its roots of an independent and principle-based foreign policy with ASEAN as its cornerstone."