KUALA LUMPUR -- The Malaysian government and global investment bank Goldman Sachs have reached a $3.9 billion settlement, under which the state will drop its criminal charges against the bank over funds solicited via three bond issuances by scandal-ridden fund 1Malaysia Development Berhad.

The settlement includes a cash payment of $2.5 billion and guarantees that the bank will return at least $1.4 billion in assets related to the proceeds it gained from assisting with the bond issuances, Malaysian Finance Minister Tengku Zafrul Aziz said in a statement today.

"This settlement represents a significant increase compared to the previous offer of $1.75 billion made by Goldman Sachs to the previous administration in 2019," Zafrul said.

Zafrul further explained that Goldman Sachs, at their own expense, would also assist the Malaysian government to appoint an asset recovery specialist to recover offshore assets related to 1MDB.

The minister added that the government was satisfied that the case could be solved out of court, which would have incurred heavy financial and time costs. "With this settlement, we can expedite the repatriation of assets without the judiciary process which would be complex and costly," he said.

Malaysia emerged as the first country in the world to prosecute Goldman Sachs as a company in August 2019 -- seeking $2.7 billion that had been allegedly misappropriated from the issuance of three bonds by 1MDB, and to return $600 million that the investment bank pocketed in fees for the three issuances.

The three Goldman subsidiaries pleaded not guilty to misleading investors about three 1MDB bond issuances worth a total of $6.5 billion. 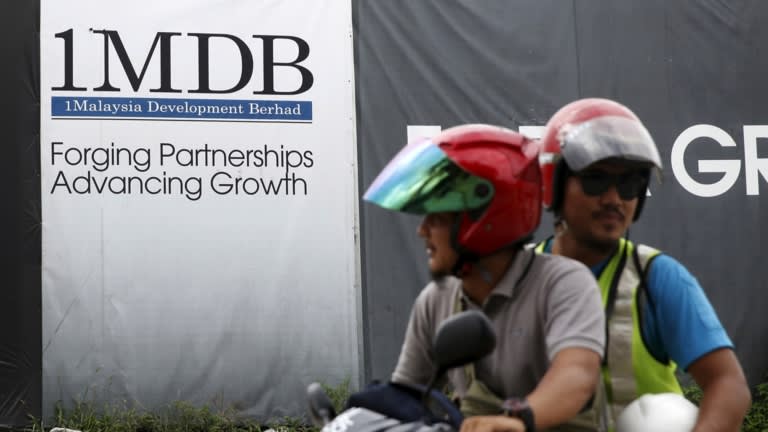 Malaysia in August 2019 became the first country in the world to prosecute Goldman Sachs as a company, in relation to the issuance of three bonds by 1MDB.   © Reuters

In June 2019, the country's former premier Mahathir Mohamad claimed that Goldman Sachs was offering $239 million in compensation, which he described as "little" if compared to the "huge killing" made by the investment bank.

Malaysia at the time also announced separate charges against 17 current and former executives of Goldman Sachs, who allegedly misled investors by making false statements and omitting key facts in relation to the 1MDB bond issuances. Under Mahathir's administration, two rounds of negotiations between the two sides took place, led by Attorney-General Tommy Thomas, but no solutions were found.

Zafrul added that the settlement also acknowledged the misconduct of two of Goldman Sach's former employees in the broader 1MDB fraud and corruption scheme. "This settlement will not affect Malaysia's claims against Jho Low and other parties related to the 1MDB scandal," he said, referring to fugitive businessman Low Taek Jho.