KUALA LUMPUR -- In moves aimed at repairing its scandal-torn economy and curbing the budget deficit, the Malaysian government on Friday proposed new taxes and a cut to the fuel subsidy, as well as the issuance of bonds worth 200 billion yen ($1.77 billion) to be guaranteed by Japan.

Starting in 2020, online service providers of content from abroad, including music, video streaming and advertising, will be subject to a service tax. This will likely affect content providers such as Spotify and Netflix.

Air travelers will pay a departure levy on top of an existing passenger services charge, while a new tax on beverages with more than 5g of sugar per 100ml will be imposed to help reduce obesity. Malaysia has one of the highest obesity rates in Asia, according to the World Obesity Federation.

Casino operators will be affected too, seeing their annual operating licensing fee and gambling duty increase by 25% and 35% respectively.

Debt, including liabilities and borrowings by state fund 1Malaysia Development Berhad, stood at 74.5% of gross domestic product as of the end of June. Without these off-balance sheet liabilities, the direct federal debt is projected to be 50.7% of GDP this year.

Najib has been indicted on 38 counts of corruption and money laundering linked to funds embezzled from 1MDB, charges which he has denied. 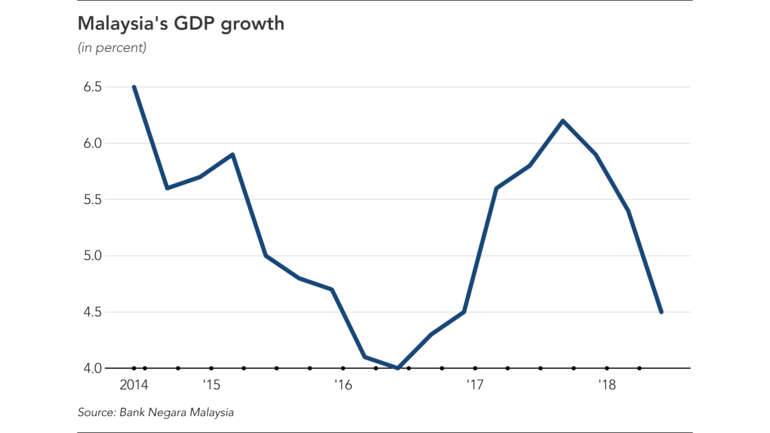 For 2019, the government has allocated 314.5 billion ringgit for spending, 8% more than the revised figure for 2018. Of this, 82.6% will go on operating expenditure for the main machinery of government. Spending for development -- including public transport and education -- is set at 54.7 billion ringgit, 0.5% less than in 2018.

Based on an average price of crude oil at $70 per barrel, revenue for 2019 is projected to be 261.8 billion ringgit, 10.7% more than 2018. Income from the oil and gas industry will increase to 31% from 22% in 2018, making up for revenue lost after Mahathir abolished the goods and services tax in May. State oil company Petronas alone will contribute at least one fifth of all revenues in the form of dividends.

To reduce the fiscal burden, the finance minister said the Japanese government had offered to guarantee up to 200 billion yen-worth of Samurai bonds with a tenure of 10 years at a coupon rate of 0.65%. This follows an official request that Mahathir made to his counterpart Shinzo Abe during a visit to Japan in June.

On Friday, Mahathir said the rate was a "considerable reduction" compared to loans taken by the previous government. The 93-year-old leader added that the loan would be used to retire some existing borrowings and hinted there would be more support from Japan.

The government is also seeking to end the fuel subsidy and instead subsidize lower-income groups through a new mechanism.