Mahathir and Anwar lead march to legislature, closed again in name of COVID 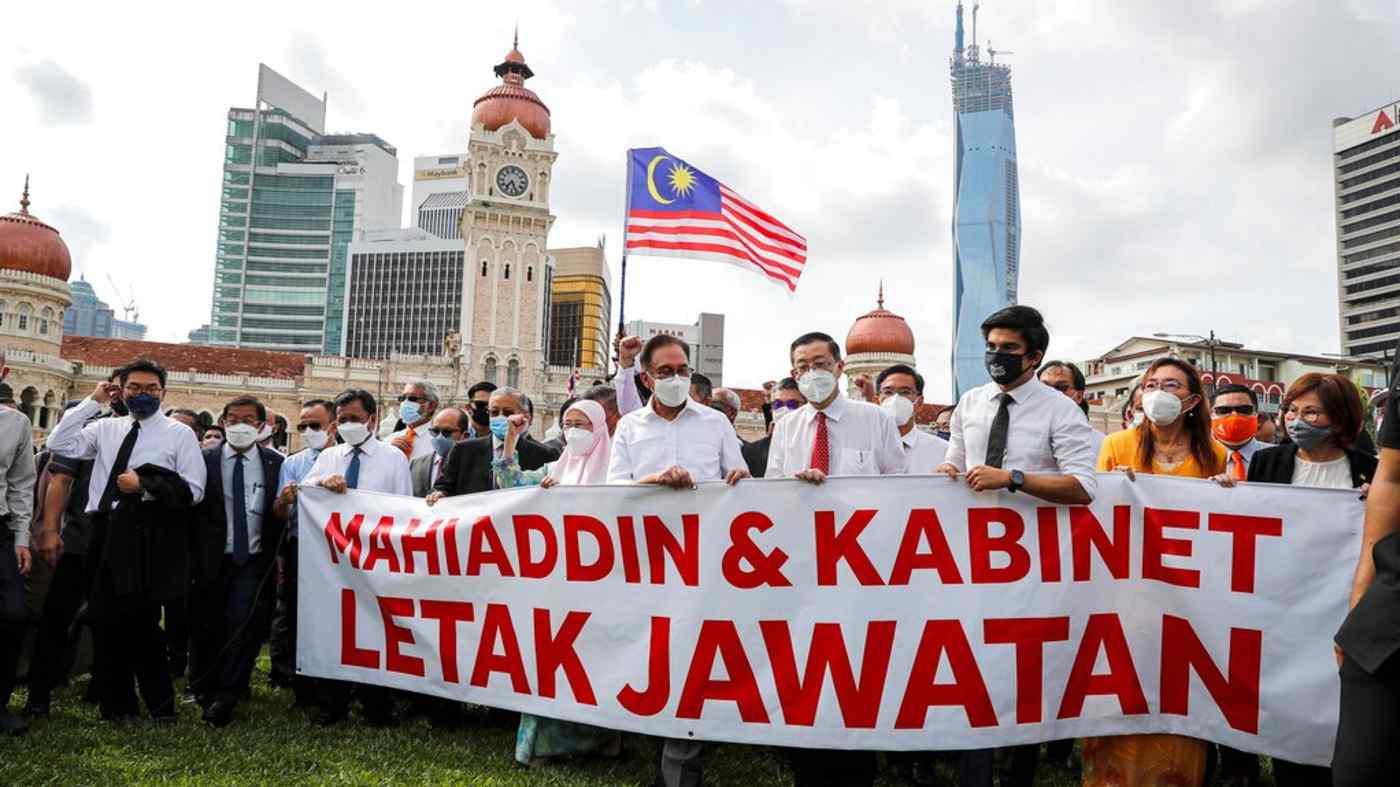 KUALA LUMPUR -- Malaysian opposition lawmakers marched on the streets toward a shuttered parliament on Monday, only to be stopped by police, as pressure intensifies on Prime Minister Muhyiddin Yassin.

The first parliament session in seven months was abruptly suspended after cases of COVID-19 were detected among attendees last Thursday. Muhyiddin's critics suspect the move had more to do with a statement from the palace that day rebuking the prime minister for quietly canceling an emergency coronavirus proclamation without King Sultan Abdullah Ri'ayatuddin's consent back on July 21.

The palace suggested that was unconstitutional, while the government insists it followed the law.

Opposition parties jumped on the king's criticism as a new opportunity to call for Muhyiddin to step down. Hundreds of Malaysians, mostly youths, joined in on Saturday with street demonstrations in Kuala Lumpur, calling for the entire government's resignation over its failure to contain COVID-19 and ease the country's economic crisis.

The country reported a record 17,786 new infections that day.

On Monday -- supposed to be the final day of the lower house sitting -- roads leading to the parliament complex were blocked by the police. This prompted opposition lawmakers to leave their cars and start marching. But they were cut off by the police federal reserve unit, a dedicated team trained to control riots.

The lawmakers, led by former Prime Minister Mahathir Mohamad and opposition leader Anwar Ibrahim, tried negotiating with the officers. After 30 minutes of discussion, the crowd started dispersing on police advice.

Speaking to the media, Anwar said the Muhyiddin-led government has effectively fallen after the royal rebuke.

"The Muhyiddin government has fallen and I have received information that some members of parliament have withdrawn support for him," he said. Anwar made similar claims last fall, when he insisted he controlled a majority in the lower house, though he did not publicly deliver proof.

The 96-year-old Mahathir told the crowd that Muhyiddin should resign because he failed to adhere to the federal constitution and "cheated" the people with his fake promises to control the spread of COVID-19 via the emergency declaration.

He said a resignation would be the honorable way for Muhyiddin to exit, rather than waiting for the people to throw him out of power.

Former Youth Minister Syed Saddiq Syed Abdul Rahman said Muhyiddin's government is the most corrupt and morally bankrupt in the country's history since independence in 1957.

"If you don't see this [parliament closure] as trampling on and an insult to Malaysian democracy, our federal constitution, and our institution of parliament, I don't know what it is," he said.