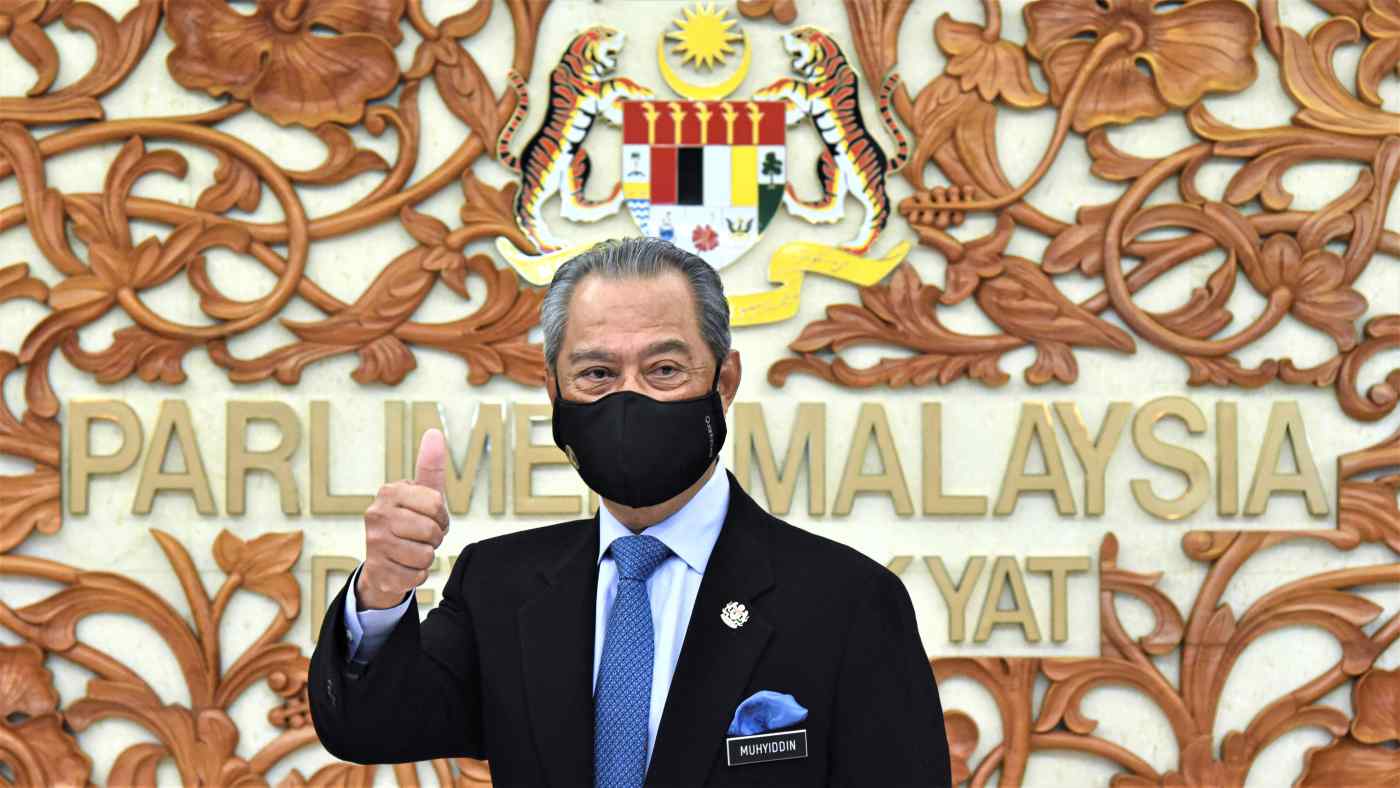 KUALA LUMPUR -- Malaysia's rocky politics have descended into a full-blown crisis, with Prime Minister Muhyiddin Yassin attempting to fend off not only the opposition but his own erstwhile allies.

But Muhyiddin, 74 and a cancer survivor, maintains that he has sufficient backing to remain in control, thanks to a division within UMNO. A party faction has aligned itself with the prime minister, rather than the lawmakers who followed party President Ahmad Zahid Hamidi in abandoning the premier.

Muhyiddin has vowed to test his support in a parliament session next month, with a confidence motion that would decide his and his government's fate. Meanwhile, experts say the continued political uncertainty is hurting an economy already slammed by the pandemic.

Here are five things to know about the battle raging in Malaysia's halls of power.

How does Malaysia's political system work?

Malaysia practices parliamentary democracy with a constitutional monarchy -- inherited from the British after the empire granted independence in 1957. The king is the head of state while the prime minister wields executive power and oversees legislation.

A general election is held every five years, in which the public votes in 222 members of the lower house. Since a pre-independence poll in 1955, the country has witnessed 14 general elections and eight premierships, two of them led by Mahathir Mohamad.

What are the origins of the current crisis?

Since the beginning of last year, Malaysia has gone from one political crisis to another.

In early 2020, disagreements between ministers in Mahathir's government over ideology and a planned power transfer to the prime minister's nemesis-turned-ally Anwar Ibrahim reached a breaking point. An internal coup staged by Muhyiddin and his confidant Azmin Ali -- now the senior trade and industry minister -- caused Mahathir's government to collapse.

Mahathir and Muhyiddin were both co-founders of the Malaysian United Indigenous Party (Bersatu in Malay). According to Mahathir, his former partner had insisted on Bersatu leaving the Hope Pact coalition to form a government with UMNO. Many say the breakaway proposal was driven by unease over the presence of the Democratic Action Party (DAP) -- an ethnic Chinese-based party unpopular with many of the Malays who make up 70% of the country's population -- as a key member of the Hope Pact.

Mahathir disagreed with the proposal and, on Feb. 24, 2020, abruptly resigned as prime minister and chairman of Bersatu. At the request of the king, he stayed on as interim leader until a new leader could be named.

Muhyiddin, meanwhile, forged the alliance between UMNO and Bersatu, with support from several other minor parties. He was named the country's eighth prime minister on March 1, 2020.

But the relationship quickly soured. Since the beginning of this year, UMNO has been threatening to ditch the ruling coalition despite holding nine federal cabinet positions. Earlier this month, UMNO made it more official, announcing that the party had submitted signed declarations from lawmakers to the king, withdrawing their support for the government. Two federal ministers from UMNO also resigned.

Ahmad Zahid stated two reasons for rescinding support. First, he accused Muhyiddin's government of failing to control the country's COVID-19 outbreak -- which recently sent daily cases above the 20,000 mark. Another reason was disobedience to the king, who had rebuked Muhyiddin for abruptly canceling a coronavirus state of emergency without royal consent. UMNO President Ahmad Zahid Hamidi, left, and then Prime Minister Najib Razak in 2017: Their party has heaped pressure on Muhyiddin to quit.   © Reuters

Muhyiddin has suggested that what really bothers his UMNO foes is his unwillingness to meddle in legal proceedings against them. Without naming names, he said recently, "I know they are not happy about my stance of refusing to entertain some of their demands, which include insisting that I interfere in judiciary affairs to release some of the individuals currently under criminal trials."

Ahmad Zahid and Najib both face separate criminal charges for alleged corruption and abuse of power.

What is the king's role?

Although the king is the head of state, most of his powers are executed only at the request or advice of the prime minister. As a constitutional monarch, he is allowed to name the premier; he can also withhold requests to declare emergencies and dissolve parliament.

To be precise, Article 43 of the federal constitution indicates that the king can appoint a member of the lower house who, in his judgment, is likely to command the confidence of the majority of the members of that house.

And if a sitting prime minister no longer controls a majority, as Muhyiddin's rivals contend? The constitution states: "If the prime minister ceases to command the confidence of the majority of the members of the House of Representatives, then, unless at his request the Yang diPertuan Agong (king) dissolves parliament, the prime minister shall tender the resignation of the cabinet."

Does the turmoil have economic side effects?

The political crisis and worsening spread of COVID-19 have weakened investor sentiment and paralyzed the economy. The central bank is expected to cut its full-year gross domestic product growth target to below 4%, down from an ambitious 6% to 7.5%.

Malaysia only received foreign direct investment worth $16 billion last year, while year-to-date, it has not seen any major investment announcements except for a $2 billion commitment by Austrian semiconductor company AT&S in June.

Yeah Kim Leng, an economics professor at Sunway University, told Nikkei Asia that the turmoil has compounded the public health and economic crises, further weighing down consumer and investor confidence.

"Investors are likely to hold back decisions pending clarity on the stability of the minority government," he said. "Consumers too will likely delay big-ticket purchases when the economic outlook, jobs and income prospects are in turn impacted adversely by prolonged political uncertainties."

Sivamurugan Pandian, an analyst at Malaysian Science University, agreed that investors would resort to a wait-and-see approach during any political crisis. "During instability and uncertainties, investors will take a precaution step and observe closely until the political climate changes," he said. The lower house of parliament is scheduled to reconvene on Sept. 6 for a nearly monthlong sitting. The promised confidence motion would be tabled by a member of Muhyiddin's government, then debated by one seconder and one opposition lawmaker, after which it would be put to a vote, a source with knowledge of the process said.

The motion, however, could come at the beginning of the session or not until the end of September, since the government sets the parliamentary agenda under the house's standing orders.

Order 15 stipulates that government business shall take precedence over private members' business, unless a matter is moved forward by a minister.

Muhyiddin is said to have the support of 105 legislators, seven fewer than the simple majority of 112 he would need to remain in power. As of Aug. 8, 117 were thought to be against him.

If those numbers are accurate, the prime minister has one to two months to win over an extra seven members before the confidence vote.

For a trump card, he may look to factions within opposition parties, where Anwar is believed to have the support of only 89 MPs to be the next prime minister. Other opposition lawmakers remain tight-lipped about their choice of leader.

Unless Anwar somehow wins the allegiance of all other parties including four parliamentarians led by Mahathir, Muhyiddin would remain the single leader with the most support.