Malaysia's 1MDB debt looms over next election and coming decades KUALA LUMPUR -- Malaysia is gradually recouping money stolen in the country's 1Malaysia Development Berhad scandal, but officials warn the failed wealth fund's debt will weigh on government finances for years to come -- a reality check that could also prove politically useful in the next election.

The government announced last week that the U.S. Department of Justice had remitted $452.36 million worth of funds seized in a 1MDB-related probe.

To date, Malaysia has secured close to 20 billion ringgit ($4.8 billion) in seized and repatriated funds, including 2.83 billion ringgit still due to come from local banking group Ambank and 336 million ringgit from international auditing firm Deloitte. It is also negotiating with KPMG, which like Deloitte signed off on 1MDB's accounts.

1MDB and SRC International, both under the Finance Ministry, earlier this month also filed 22 lawsuits to recover assets worth over $23 billion from various institutions and individuals they say were "unjustly enriched." Media reports have suggested the list of defendants includes JPMorgan Chase, Deutsche Bank, Citigroup and former Prime Minister Najib Razak, who is already appealing convictions on seven related corruption charges.

Nevertheless, Finance Minister Tengku Zafrul Abdul Aziz recently cautioned that 1MDB's staggering debt obligations will remain a burden for the next two decades. According to the minister, monies that have come into a special trust account so far would only be enough to service 1MDB's debt for this year and 2022.

"Once all recovered funds in the trust account have been utilized, the government will still have to continue bearing the burden of servicing 1MDB's debt obligations, which were backed by the government's guarantee ... when these debts were created," the finance minister said last week.

The government has set a repayment schedule until 2039 for covering outstanding obligations. These include principal and coupon payments as well as profit and interest on bonds, Islamic sukuk bond-like instruments and term loans.

And herein lies the political value of reminding the public about the enormous debt. 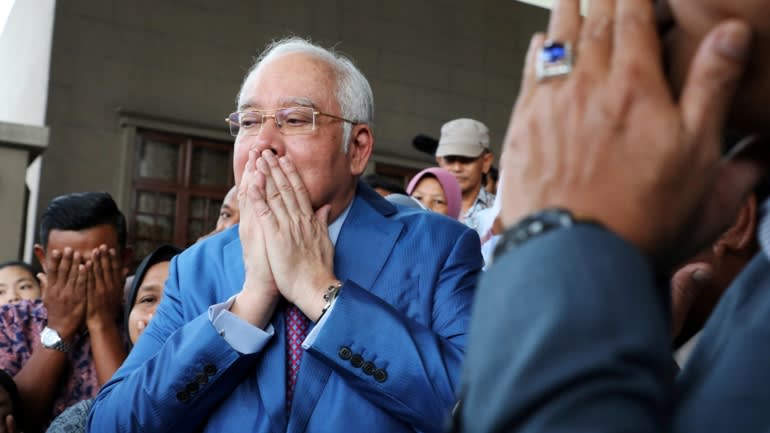 Former Prime Minister Najib Razak, who is appealing convictions on 1MDB-related charges, has been a vocal critic of the current government.   © Reuters

1MDB and SRC amassed the obligations after the creation of the state wealth fund in 2009 under Najib's stewardship. None of the companies' investments and business activities have produced returns, while most of the debts were guaranteed by the federal government.

Since his loss in the 2018 election amid criticism over 1MDB, Najib has become something of an attack dog for his party, the United Malays National Organisation. He regularly slams the government that until only recently UMNO professed to support, as part of the arrangement that ousted 2018 winner Mahathir Mohamad and elevated Muhyiddin.

"The details of the debt are of course calculated by the financial professionals" and acknowledged by the current and previous governments, said Oh Ei Sun, senior fellow at the Singapore Institute of International Affairs. But highlighting them now may be "an opportune retort to the daily salvos of criticisms against [the current government] launched by Najib."

Muhyiddin has promised to call a general election as soon as the coronavirus is resolved -- an election Najib will not be able to contest unless he wins his ongoing appeal. Najib faces 12 years in jail and a $50 million fine for criminal breach of trust, money laundering and abuse of power in connection with illegal proceeds from SRC, along with more pending charges.

Nevertheless, Oh explained, "the political reality remains that Najib is still hugely popular both within and outside of UMNO, and he is most relentless in his daily criticisms of [the government], something which UMNO itself could not do effectively."

Now that UMNO has vowed to go head to head with Muhyiddin's United Malays Indigenous Party (Bersatu) in the upcoming election, the prime minister's camp will be keen to associate its rival with lingering ill effects from 1MDB.

UMNO typically distances itself from 1MDB by portraying it as Najib's problem, although some other UMNO figures also allegedly benefited. Najib, meanwhile, maintains 1MDB still has assets that could be monetized to pay the debts.

But "if UMNO continues to let itself be aligned with Najib, it is inevitable that the 1MDB issue would also rub off on UMNO," Oh said.

At least, with Muhyiddin himself admitting the government is "sorely short of money," Oh said, the 1MDB debt obligations "could be seen as an additional burden at this critical period that the government has to shoulder."

Sivamurugan Pandian of Malaysia's National Science University sounded less convinced about the 1MDB issue's power to sway voters nowadays, though he too said it "could be a tool."

"But it has been going on for so long ... the masses are keener on other issues today, especially with the COVID-19 health and economics issues."

Sivamurugan was sure 1MDB "would definitely be used in the next election campaign" but said he advises finding other talking points.

Either way, the scandal is still making headlines years after it broke. U.S. investigators believe that some $4.5 billion was stolen from 1MDB and SRC International by several individuals and used to buy expensive art, a superyacht, high-end properties and more. The alleged mastermind, businessman Low Taek Jho or Jho Low, remains a fugitive.