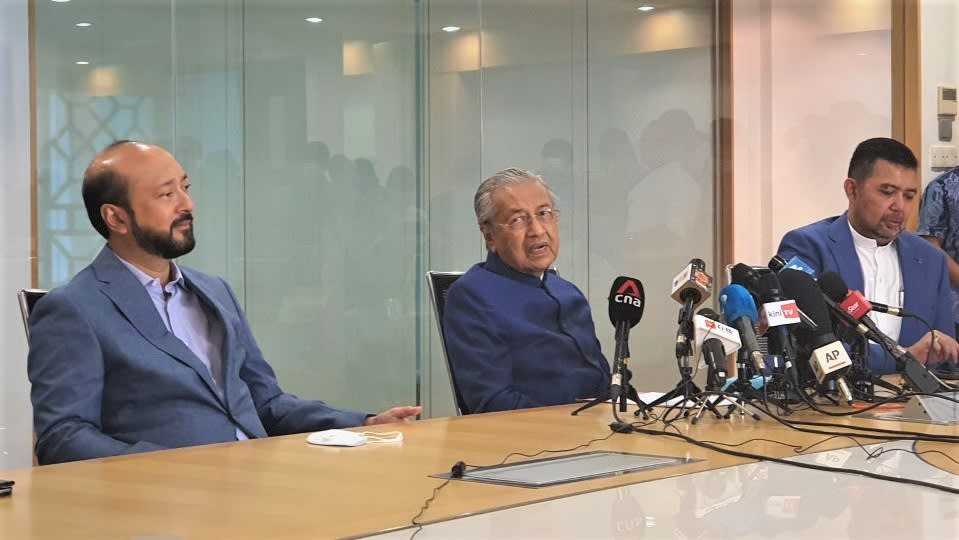 KUALA LUMPUR -- Malaysia's former Prime Minister Mahathir Mohamad on Friday launched a new political party, as he gears up for a possible snap election that would give him a shot to topple the man who replaced him.

Speaking to reporters, the 95-year-old Mahathir said tentatively that he would chair the still nameless party while his son, Mukhriz Mahathir, would be president. He said the necessary registration papers have yet to be submitted, but that this would be done as soon as possible.

"We will be a third force and not be a part of the National Alliance or Alliance of Hope," Mahathir said, referring to the ruling and opposition coalitions.

Earlier the same day, Mahathir and four others lost a bid in the Kuala Lumpur High Court to nullify their sackings from the Malaysian United Indigenous Party, or Bersatu, which they founded in 2016 alongside Muhyiddin Yassin. Muhyiddin unseated Mahathir as prime minister earlier this year via an internal coup.

But Muhyiddin has been governing on a knife's edge ever since, with only a narrow majority in parliament. His position appeared to grow even shakier after the corruption conviction of former Prime Minister Najib Razak late last month, which raised the question of whether Najib's United Malays National Organization would continue to support the government.

Mahathir said his new group "will be based on Bersatu's founding principles, as it has deviated from its cause."

Asked about his age and whether he was up for an election at 95, he quipped, "Well, I can still hear and answer your question."

Mahathir was also asked whether he was concerned that the government might try to delay approval of his party's registration. "We have faced this before when we were trying to register Bersatu," he replied. "But if the government is not afraid of us, then they should approve it."

Speculation that Muhyiddin will resort to a snap poll has been swirling for weeks, with most observers expecting a vote would happen in the first quarter of next year at the earliest.