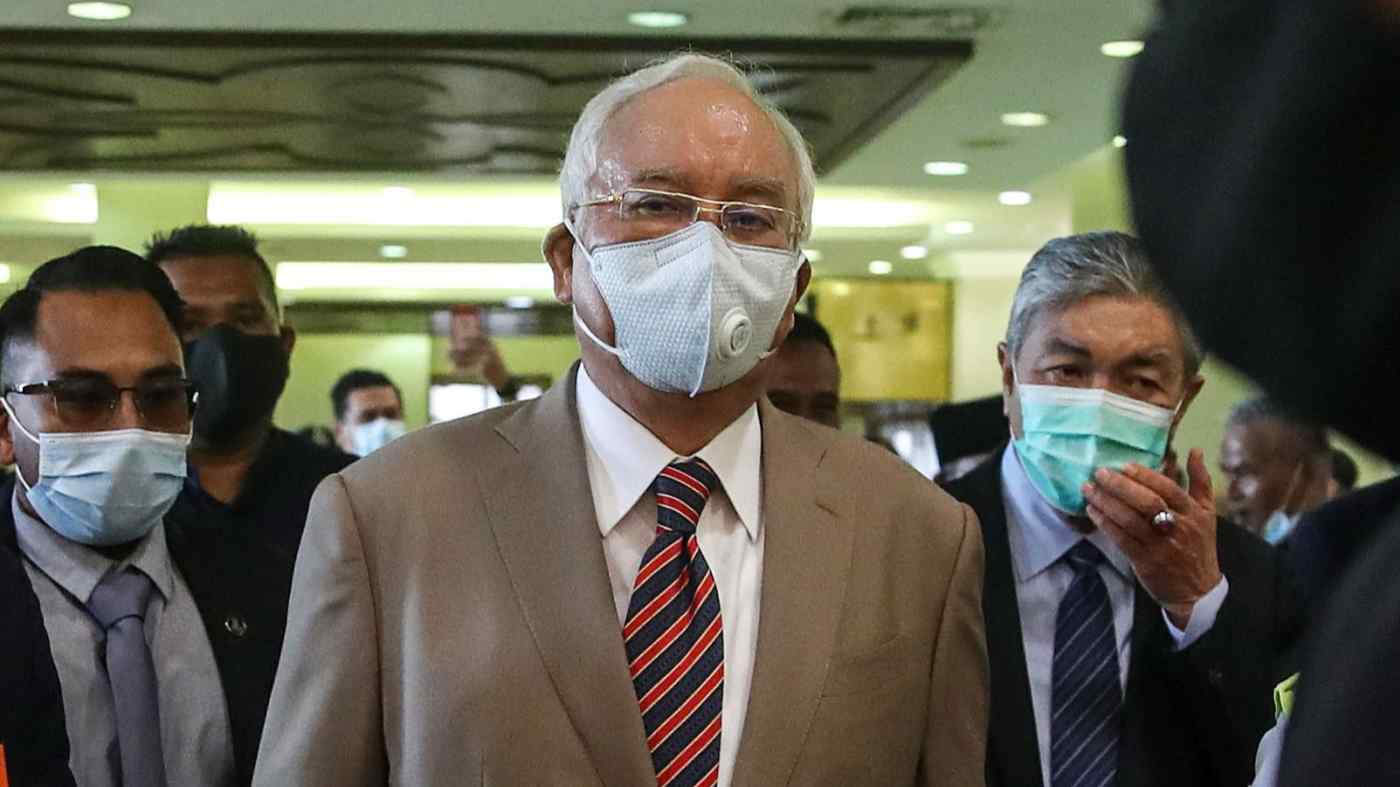 KUALA LUMPUR -- Malaysia's former Prime Minister Najib Razak is due to spend 12 years in prison, after being found guilty on Tuesday in his first corruption trial stemming from the multibillion-dollar 1Malaysia Development Berhad scandal.

The Malaysian High Court convicted Najib on seven out of seven counts in connection with funds misappropriated from a subsidiary of the now-defunct state fund. The former leader, wearing a beige suit, listened calmly as Judge Mohd Nazlan Mohd Ghazali explained his decisions on a charge of abuse of power, three counts of criminal breach of trust and three charges of money laundering.

"I, therefore, find the accused guilty of all seven charges," the judge said as an expressionless Najib sat in the dock.

After lengthy arguments, the judge sentenced Najib to 12 years for abuse of power and 10 years for each of the other charges, along with a 210 million ringgit ($49 million) fine. The sentences are to be served concurrently, however, and Najib has vowed to appeal.

A failure to pay the fine would result in an extra five years in jail. The judge granted a defense plea to delay the imprisonment and fine until appeal, but ordered 1 million ringgit of additional bail to be paid by Wednesday.

The seven charges pertain to Najib's alleged siphoning of 42 million ringgit of funds from 1MDB unit SRC International into his personal bank accounts. Allowed to address the court before sentencing, Najib said: "As a Muslim ... I swore to God, I did not demand the 42 million, I did not plan for the 42 million, I've no knowledge of the 42 million. Nor is there evidence or a witness to say so. That's all I have to say."

Despite coronavirus concerns, a huge crowd of Najib supporters gathered outside the heavily guarded court complex.

"Whether he is convicted or not, we know he is innocent," said supporter Jamilah Bahardin, who said she traveled nearly 500 km to show solidarity. "We will continue to rally behind our leader, the one and only Najib Razak." A Najib supporter cries outside the courthouse after the former prime minister was found guilty.   © Reuters

Najib's defense team attempted to stall the sentencing until next Monday, but Justice Mohd Nazlan rebuffed the request. The judge could have handed out maximum sentences of 20 years for the abuse of power and breach of trust charges, plus whipping and fines, along with 15 years for money laundering and a fine of 5 million ringgit or five times the amount -- whichever was higher.

The seven counts heard Tuesday all stem from Najib's time as prime minister from 2009 to 2018. 1MDB, Najib's brainchild, was intended as a sovereign fund to promote economic development but instead ended up with over 55 billion ringgit in debt.

Money from 1MDB is believed to have been misappropriated by Najib and a few others -- namely his stepson Riza Aziz and fugitive businessman Low Taek Jho, better known as Jho Low. At least $4.5 billion is thought to have been taken, and U.S. authorities say an array of assets were purchased using the stolen funds, including a superyacht and Picasso artwork.

Najib, who celebrated his 67th birthday last week, has steadfastly maintained his innocence. But the scandal over the fund's mismanagement and the allegations of rampant corruption contributed to his defeat to Mahathir Mohamad's coalition in the 2018 election.

After an internal coup forced Mahathir to resign earlier this year, however, Muhyiddin took power in March with UMNO backing. This political dependency, coupled with graft cases that have fallen through recently, raised questions about the government's resolve against corruption. Now a key question is whether the UMNO will continue to support Muhyiddin.

"The government will now claim judicial independence and integrity," Oh Ei Sun, a senior fellow at the Singapore Institute of International Affairs, told the Nikkei Asian Review. "But it will also intensify the factional fight within UMNO itself." Police officers stand guard outside the Kuala Lumpur High Court ahead of the Najib verdicts.   © Reuters

Some lawmakers rejoiced at the outcome of the trial. "Najib Razak may not be counting the bars of his prison cell just yet but today, justice has prevailed," Charles Santiago, an MP with the Democratic Action Party, wrote on Facebook.

Hannah Yeoh, another DAP lawmaker, said the news was a vindication for voters who felt "disillusioned" after Mahathir's exit. "Never say you wasted your vote in 2018," she said, since Mahathir's government had pushed the investigations forward.

But the sea of supporters outside the court made it clear that Najib still has his fans.

Aziz Rejab, a farmer from Najib's home state of Pahang, said the money found in Najib's possession was only used for goodwill projects. "I am very confident because in Pahang and even in my village, Najib has helped so much for us, in terms of subsidies, farming tools and even housing," he told Nikkei, stressing any sentence should account for the former leader's good deeds.

"In the eyes of God," Aziz said, Najib "is an innocent and kind man."

The government last Friday managed to extract a $3.9 billion settlement from Goldman Sachs. The U.S. investment bank had helped 1MDB with a series of bond issuances and was accused by Malaysian authorities of misleading investors. The bank settled the case in exchange for Malaysia dropping criminal charges.