KUALA LUMPUR -- Anwar Ibrahim is free again and poised for a political comeback.

Malaysia's prime minister-designate had his five-year jail sentence shortened following a royal pardon on Wednesday, the first in recent history. But the de facto leader of the opposition-turned-ruling alliance is sidelined currently with a shoulder injury as he awaits a shot at the prime minister's seat now occupied by Mahathir Mohamad.

In a news conference after his release on Wednesday, Anwar said he was in no hurry to hold any government post. "My position is to give [Mahathir] the necessary support, and to ensure that the reform agenda is effectively carried out," Anwar told reporters gathered at his house in a Kuala Lumpur suburb.

Anwar was scheduled to be freed on June 8 after serving out his sentence on allegedly trumped-up sodomy charges. It was the second time he has been imprisoned for the offense.

The coalition's surprise win in last week's election made the pardon possible, enabling Anwar to run in an election, a prerequisite for the prime minister's post.

Mahathir said on Tuesday that he would not stay long on the job -- his second time as prime minister -- probably one or two years. The statement follows his pre-election pledge reached with leaders of the Pakatan Harapan, or Alliance of Hope.

The 70-year-old Anwar is known for pushing "reformasi," or reform to oust the old guard headed by Mahathir in the late 1990s. This marks his third attempt for the top leadership position.

Once a student activist and Muslim youth leader, Anwar joined Mahathir's government in 1982, partly to counter radical movements led by the opposition Parti Islam Se Malaysia, or PAS. He rose rapidly through the ranks, moving from one portfolio to another, before becoming Mahathir's deputy in 1993.

During his tenure, Anwar prioritized national rather than vernacular education, alienating Malaysia's ethnic Chinese community. He standardized pronunciation of the Malay language, and enriched it by importing Arabic words. He was also instrumental in setting up an Islamic university for the majority ethnic Malay, a move which offered religious students an alternative to studying in the Middle East or West Asia.

To the outside world, Anwar portrayed himself as a reformer, campaigning for democratic institutions and against government corruption. These ideals were reflected in "The Asian Renaissance," his collection of essays published in 1996 that preached tolerance and pluralism.

Many believed Anwar would replace Mahathir as prime minister. His rise was compared to Baharuddin Jusuf Harbibie, the Indonesian president who succeeded Suharto. But Harbibie, a technocrat tasked with ridding the world's most populous Muslim nation from decades of corruption under Suharto, did not last long. 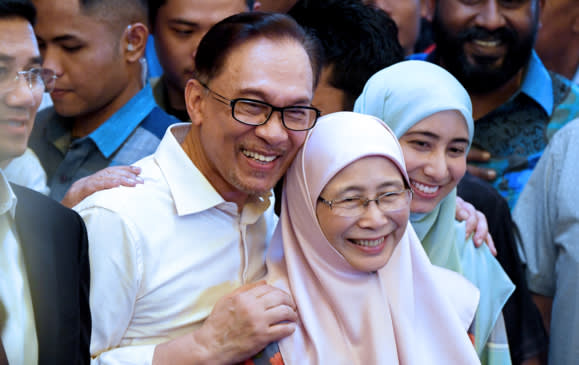 Former Malaysian Deputy Prime Minister Anwar Ibrahim poses with his family at his home in Kuala Lumpur on May 16. (Photo by Takaki Kashiwabara)

Anwar followed roughly the same trajectory, perhaps due to his constant calls for reform, which irked Mahathir. Their rift peaked at the height of the Asian financial crisis when trying to mitigate the country's currency meltdown. Anwar, as finance minister, argued for the International Monetary Fund's approach of raising interest rate and refusing to bailout troubled entities. This conflicted with Mahathir, who advocated capital controls. As a result, Anwar was sacked in September 1998 and later jailed on corruption and sodomy charges.

A federal court eventually overturned Anwar's sodomy conviction, releasing him in 2004. After his release, Anwar used his oratory skills to quickly rebuild the fractured opposition, forming alliances with PAS and the Democratic Action Party. The opposition then went on to deny the ruling alliance a two-thirds majority in parliament during the 2008 election.

But despite gaining opposition seats in parliament, Anwar soon came under fire when his claim of having control of the government proved false after parliamentarians from the ruling alliance failed to back him.

Anwar had another chance in 2013, winning the popular majority but failing to gain a majority of seats, an outcome caused by the country's uneven electorate boundaries.

Before last week's election, his party agreed with Mahathir for Anwar to assume leadership after receiving a royal pardon.

The Mahathir-led opposition won the election on a platform that included abolishing the unpopular goods and services tax, as well as implementing institutional reforms, such as limiting the prime minister to two terms and increasing anti-graft measures.

Political observers say this may be Anwar's last chance to live up to his reformist ideals.

"Anwar, unlike Mahathir, has enough charisma to hold the coalition together and deliver on the promises of reforms," said James Chin, a professor at University of Tasmania, Australia.

Some uncertainty remains over the transition, however, due to Mahathir's reluctance to specify a clear timeframe, said Peter Mumford of risk advisor Eurasia Group. "He will stay long enough to make the changes he wants history to remember him for, while getting out before unpopular decisions inevitably need to be made and allowing plenty of time for his successor to build steam before the next election, due by 2023," said Mumford.

To allay market fears, Anwar's wife, Wan Azizah Wan Ismail, said her husband is in no hurry to replace Mahathir. "We have to give the prime minister time to form his cabinet and ensure that the government is running well," she told reporters on Tuesday.