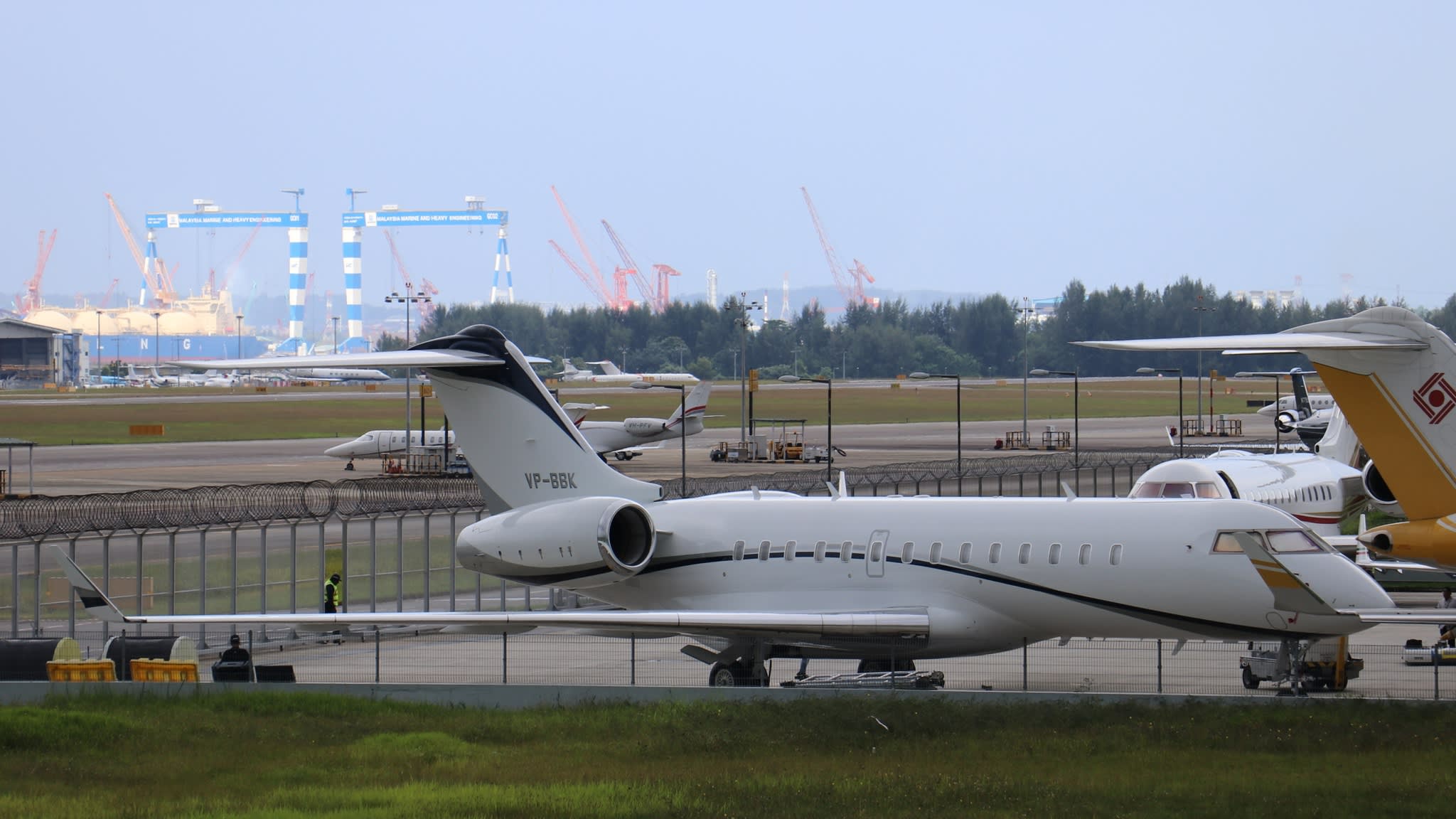 Seletar Airport, in the north of Singapore, is typically used for chartered flights. Cranes can be seen in the background, a few kilometers away in Malaysia, across a narrow body of water. (Photo by Kentaro Iwamoto)
KENTARO IWAMOTO, Nikkei staff writerDecember 12, 2018 21:14 JST | Singapore
CopyCopied

SINGAPORE -- Malaysia has issued a fresh claim over airspace against Singapore on social media, potentially escalating territorial tensions ahead of a bilateral meeting expected in January.

Transport Minister Anthony Loke earlier this month said a new flight path to Singapore's Seletar Airport in the north of the city-state could hinder the development of a port in Johor, a Malaysian state on the other side of a narrow body of water separating the two countries. Seletar Airport is mainly used for chartered flights.

Late Tuesday night, Loke posted a 95-second video clip on his Facebook page that laid out the reasons for Malaysia's resistance of the flight path that requires planes to approach from the northern side of the runway over Johor. The video said that the height limits set by Seletar means that the Johor port "will be subject to higher risks and multiple restrictions."

"Even a mobile crane [for construction] would breach the height limit!" according to the video.

"To Malaysians, please watch and share this," Loke wrote in a post that accompanied the video. "We urge Singapore... to amend the flight path as per our request." As of Wednesday 7 p.m. local time, the video was shared about 10,000 times.

Separately, the Malaysian Transport Ministry on Wednesday issued a statement saying that Seletar Airport's new flight path is "a clear violation of Malaysia sovereignty and international law and standards." Malaysia demanded use of the southern side of the runway and "within Singapore's sovereign airspace."

In response to these claims, Singapore's Transport Minister Khaw Boon Wan told local media that the new flight path would not pose any safety or security risks to operations at the Malaysian port.

Although air traffic in southern Johor has been handled by Singapore since 1974, Kuala Lumpur has said it wants to bring that under its control. It is this move that has sparked the recent territorial tussle.

The dispute blew into the public sphere last week, as the Southeast Asian neighbors and rivals argued with each other over maritime boundaries. According to Singapore, Malaysian vessels made "intrusions" into its territorial waters after Kuala Lumpur extended the sea boundary of Johor Port "in a manner which encroaches into Singapore's territorial waters."

Singapore's Khaw on Wednesday told reporters that the Malaysian government has reduced vessels in the area to just one and he acknowledged this move as conciliatory. But he also demanded full withdrawal of vessels from the area. "Once again, we strongly urge Malaysia to withdraw from our waters."

Officials from both nations are expected to hold a meeting in the second week of January to seek a settlement.