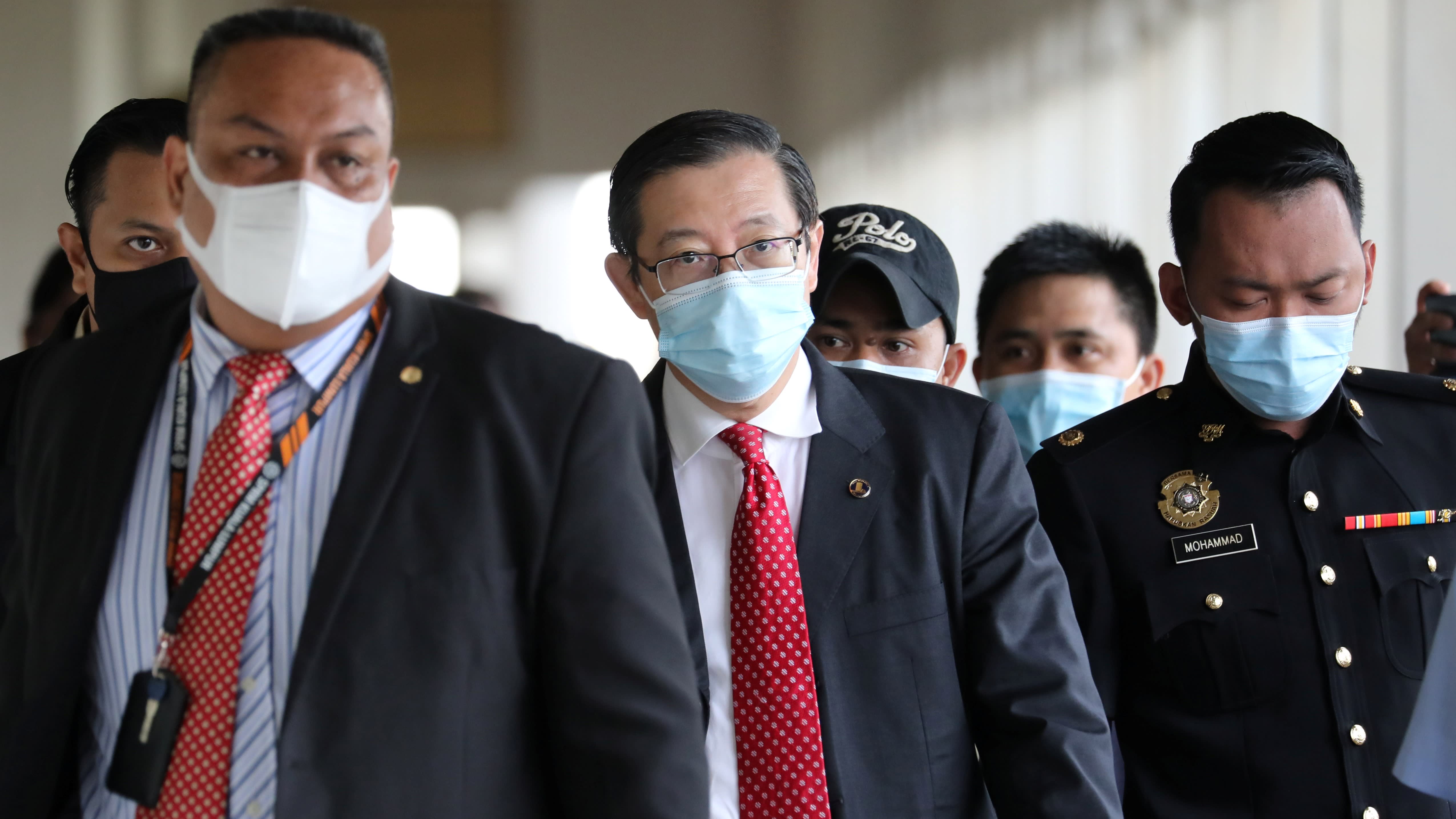 KUALA LUMPUR -- Malaysia's former Finance Minister Lim Guan Eng on Friday pleaded not guilty to a corruption charge involving a $1.5 billion undersea tunnel project, after his overnight arrest stunned the nation and prompted his allies to accuse the government of "political persecution."

Lim, who is the secretary-general of the Democratic Action Party -- a major opposition group -- was detained late on Thursday by the Malaysian Anti-Corruption Commission (MACC) to face the charge in the Kuala Lumpur High Court. Two additional cases against Lim are to be heard in the island state of Penang next week.

Lim is alleged to have requested a 10% kickback on profits from a construction company, in return for contracts to build three expressways and one undersea tunnel. The authorities say this happened when he was Penang's chief minister between 2008 and 2018.

In court, Lim entered a plea of not guilty before Judge Azura Alwi, who set bail at 1 million ringgit ($238,000) with two sureties and ordered him to surrender his passport. Under the MACC Act of 2009, he faces a possible fine of five times the value of the bribe and/or imprisonment of up to 20 years.

Allegations were first leveled against Lim in 2016, when Najib Razak was prime minister. The matter was dropped after the 2018 election, in which a coalition led by Mahathir Mohamad ousted Najib -- who himself was convicted on multiple corruption charges last month in connection with the multibillion-dollar 1Malaysia Development Berhad scandal.

Lim went on to serve as Mahathir's finance minister.

The DAP's Teresa Kok, another former minister, said the anti-graft authority is pursuing the case even though investigations turned up nothing. "There is not a single bit of evidence that suggests wrongdoing. Political persecution by Perikatan Nasional has begun," she said, using the Malay name of Muhyiddin's coalition.

Liew Chin Tong, a former deputy defense minister, expressed his disappointment over Lim's detention. "MACC could have just informed Lim to be present at the courtroom at a certain time," he said. "There's no need to keep him overnight. He won't run away. Perhaps this is one of many persecutions."

On Facebook, Lim's son Marcus Lim said his father's case shows the current government is resorting to dirty political tactics. He added that the family saw this coming after an internal coup prompted Mahathir's resignation in February, paving the way for Muhyiddin's rise.

"To be honest, we expected this day to come since the downfall of the government of Pakatan Harapan," Marcus Lim wrote. "Their plan is simple, to frame and capture those leaders who wouldn't bow down to their dirty scheme. Their motive is clear, to dismantle DAP, ultimately destroying PH.

"Don't worry, we will fight back," he vowed. "Definitely."

The move against Lim is bound to be politically polarizing, according to Oh Ei Sun, a senior fellow at the Singapore Institute of International Affairs. "The supporters of the opposition would, of course, see these charges against Lim as nothing but a political vendetta," he told the Nikkei Asian Review. "Supporters of the ruling coalition, on the other hand, would cheer on these charges."

Oh said the structure of Malaysia's oversight mechanisms is a disadvantage for Muhyiddin's government. Since the anti-graft commission, the public prosecutor and the election commission all answer to the executive, the public will connect any case against politicians to the sitting government.

"In the context of a developing country undergoing democratization after a long period of autocratic, one-party rule, it is perhaps advisable to sequester some crucial institutions such as the public prosecutor's office, the anti-corruption agency and the election commission away from the purview of the government or executive branch of the day," he suggested. This way, "these institutions could retain at least a semblance of impartiality."