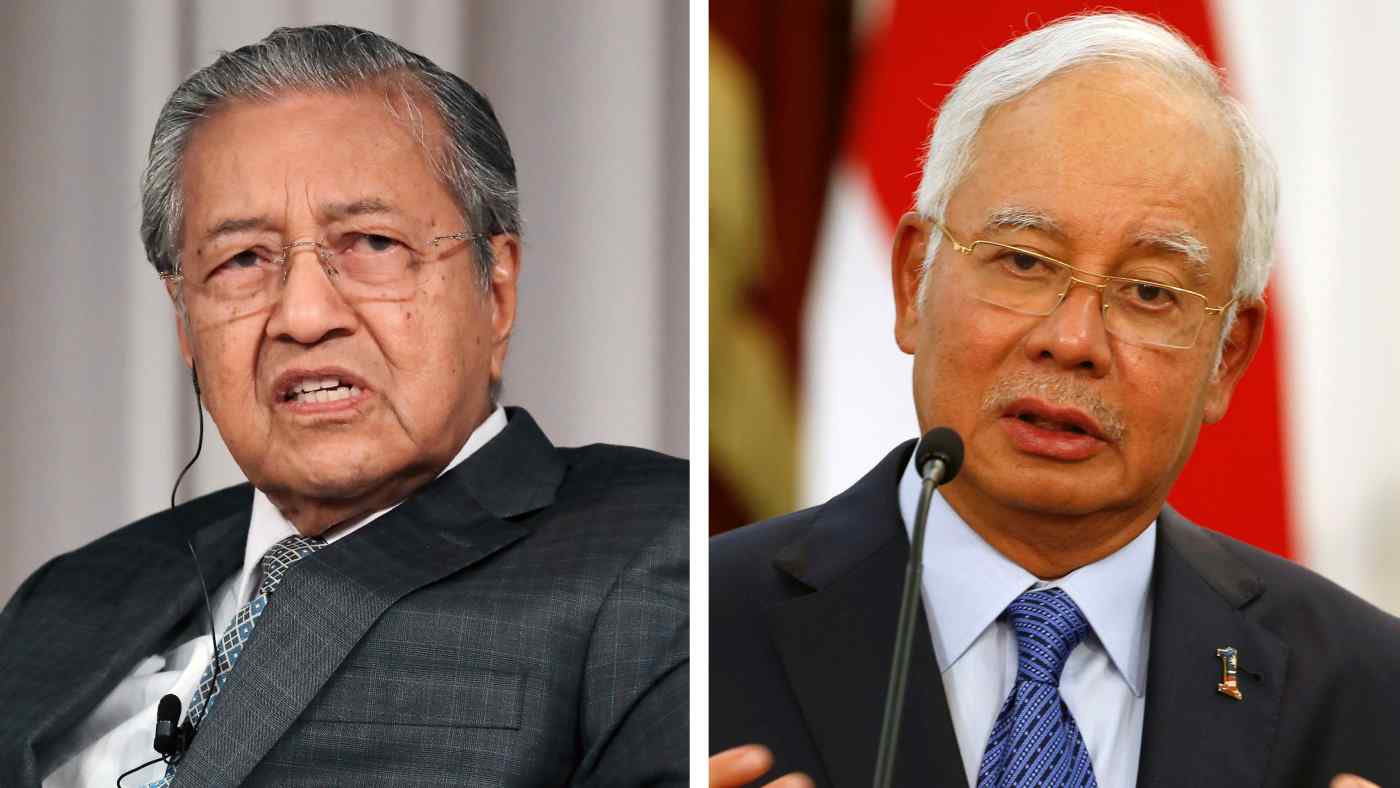 KUALA LUMPUR -- Prime Minister Najib Razak may dissolve Malaysia's parliament as early as this month for an election expected by mid-2018 that would pit the ruling coalition against an opposition led by Mahathir Mohamad, a former prime minister resolved to unseat his onetime protege.

Grassroots party leaders are mobilizing on the expectation of the parliament's dissolution. Barisan Nasional, or the National Front, has held power since Malaysia's independence in 1957, and the party enjoys favorable footing amid sound economic growth, low unemployment and strong leadership under Najib. But the fragmented opposition is organizing quickly under a determined Mahathir.

"Malaysia is led by a prime minister who is a thief," Mahathir told thousands of people Saturday at an opposition rally. 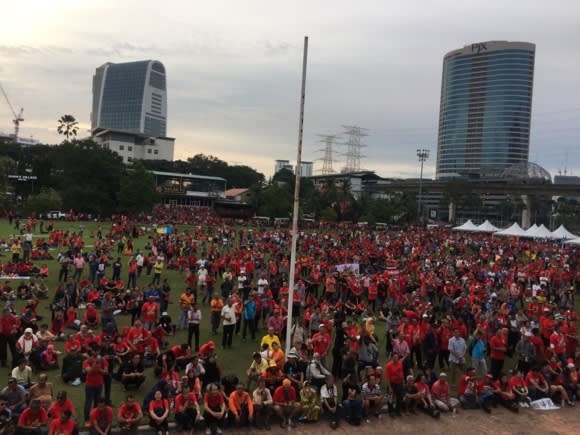 The 92-year-old politician urged voters to reject the National Front, led by Najib's United Malays National Organization, and support the opposition Alliance of Hope. Mahathir for decades had been a supporter and leader of UMNO, which gave him the platform to climb the hierarchy and subsequently govern Malaysia for 22 years starting in 1981. Ousting a sitting prime minister is not new to Mahathir, as he sparked the replacement of Malaysia's first prime minister, Tunku Abdul Rahman Putra Al-Haj. Mahathir, a party member in the late 1960s, wrote then to Rahman, asking him to take responsibility for racial unrest that resulted in fatalities. That letter was later circulated widely, leading to Rahman's downfall in 1970.

Mahathir also was instrumental in the 2009 removal of his handpicked successor, Abdullah Ahmad Badawi, and subsequently gave the nod for Najib to take over.

"We have had problems over the past 60 years of independence, but the one we have now is extraordinary," Mahathir told the Saturday night crowd. He was dressed in red, the color of his newfound Malaysian United Indigenous Party.

Mahathir called Najib responsible for the billions of dollars in losses incurred by state fund 1Malaysia Development Berhad, a claim that Najib has denied. Over the past two years, authorities from Switzerland to the U.S. have probed and penalized banks involving money laundering tied to funds from 1MDB. The fund, a brainchild of Najib, was set up to drive economic development through strategic investments.

Despite Mahathir's relentless attacks, UMNO appears focused on leading the National Front to yet another victory. A party insider cited a general mood of confidence toward winning the 14th general election, which must be held by mid-2018. UMNO is drumming its campaign message quietly in events organized nationwide by local communities.

Parties already are working to persuade fence-sitters in time for parliament's dissolution, which could come at any time on the discretion of Najib, who also serves as UMNO's president.

The economic landscape appears to favor Najib, with the country 5.7% growth in gross domestic product on an annual basis over the first half of 2017 thanks to domestic spending and stronger demand for Malaysian goods.

"Despite some people painting a negative picture of the country's economic conditions, the central bank report shows the real situation," Najib said of the GDP growth rate in August. By the end of September, aggressive turnaround plans were announced for ailing state-owned companies Malaysia Airlines and Proton, the state carmaker under DRB-Hicom. 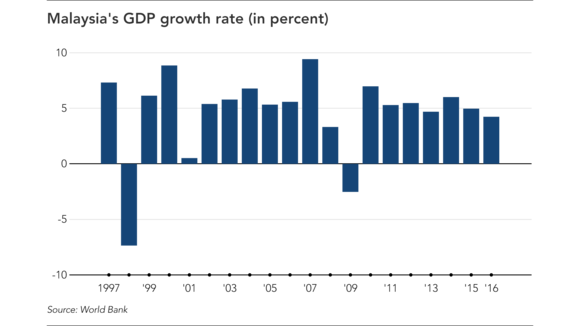 UMNO holds 86 of the ruling coalition's 132 seats in parliament, making it the largest of more than 10 parties in the coalition.

Malaysia's parliament is modeled on that of the U.K., and the 222 seats in the lower house are filled by single-seat constituencies through an election that must be held every five years.

The opposition led by the Alliance of Hope possesses 88 seats, largely via the Chinese-majority Democratic Action Party and Parti Islam Se-Malaysia, or Malaysian Islamic Party. Mahathir's party itself has only one seat held through Muhyiddin Yassin, the former deputy prime minister axed by Najib for questioning his role in the 1MDB scandal.

The ruling party remains stable even as dissenting voices grow amid the scandal and Malaysia's higher cost of living. In a national poll published in June by Merdeka Center for Opinion Research, 68% of respondents expressed dissatisfaction with the government's management of the economy.

The pollster said the opposition may have an edge over the ruling party in urban areas but not in rural constituencies, which account for the majority of seats. UMNO traditionally has been strong in rural Malay villages where the opposition lacks the resources to penetrate. The Federal Land Development Authority, or Felda, lets the government control the livelihood of over 100,000 households known as settlers who live and work on state-run plantations across the country.

Infighting also plagues the opposition. The Malaysian Islamic Party, which controls 15% of the opposition's seats, has warmed to UMNO in recent years, getting the latter's backing for introducing Islamic laws that favor penalties such as amputation for theft and stoning for adultery.

Even so, many at Saturday's rally place their hopes on Mahathir to change a government they deem corrupt.

"We don't have a problem with Mahathir becoming a prime minister again, with his vast experience in the past," said Ahmad Rizal, who works at a state-owned company and came from the state of Perak with 200 supporters.

Mahathir seems adamant to fight on until he ousts Najib.

"I don't know how many years more I need to finish this work," Mahathir told the rally, halting a few times for breath. 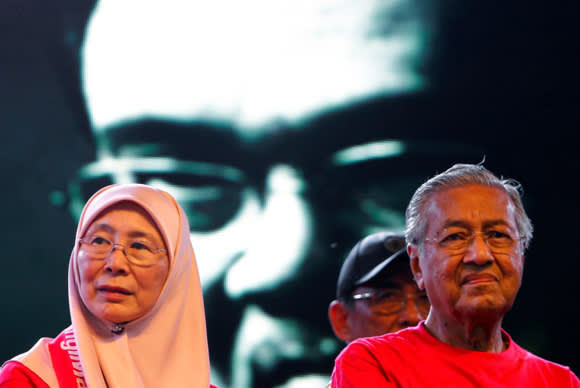