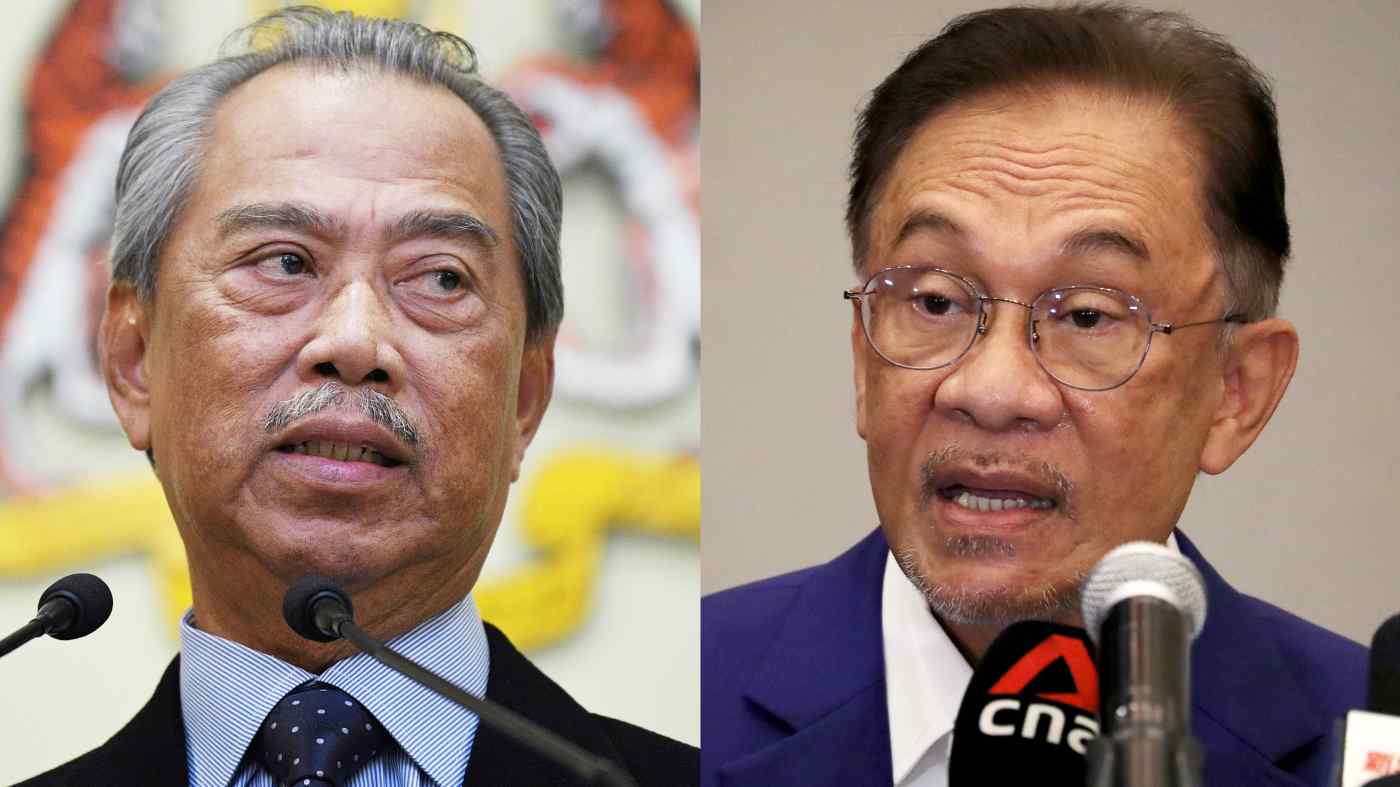 KUALA LUMPUR -- Malaysia's political parties are scurrying to cash in bargaining chips amid the standoff over who should lead the country -- current Prime Minister Muhyiddin Yassin or opposition leader Anwar Ibrahim.

Both men aim to demonstrate they control majority support among the 222 lawmakers in the lower house. But with the capital back under coronavirus restrictions until at least Oct. 27, the tussle may not be resolved anytime soon.

At last count, Muhyiddin had the backing of 114 parliamentarians, a razor-thin advantage over the minimum 112. Late on Tuesday, however, the United Malays National Organization -- a critical source of support for Muhyiddin's government, with 39 lawmakers -- threatened to quit the ruling coalition if unspecified new conditions were not met.

It appeared to be no accident that the UMNO announcement came right on the heels of Anwar's audience with King Sultan Abdullah Ri'ayatuddin.

Anwar had met with the king for 25 minutes on Tuesday and told reporters he showed proof that over 120 members of parliament support him. The palace, though, painted a different picture -- a contradiction political analyst Sivamurugan Pandian said left the public scratching their heads.

"It created more questions because the palace stated that Anwar Ibrahim did not provide the names" of the lawmakers supporting him, whereas Anwar said he presented the king with legitimate evidence, the analyst at National Science University told Nikkei Asia.

Anwar had suggested the king would weigh that evidence and check with politicians to see where they stand. But now, with the country logging triple-digit daily increases in COVID-19 cases, the palace has imposed a semi-lockdown -- making it tougher for Anwar to substantiate his claims.

The king had been scheduled to meet Anwar's allies Lim Guan Eng of the Democratic Action Party and Mohamad Sabu of the National Honest Party on Wednesday, but those and all other audiences have been postponed indefinitely.

Although many are saying Anwar missed a golden opportunity, Oh Ei Sun, senior fellow at the Singapore Institute of International Affairs, thinks the longtime leader-in-waiting was being cautious in not revealing all his cards to the king.

"I think, after having at least twice been previously deprived of his alleged majorities -- by essentially seeing those who pledged support to him reversing their allegiance as they were lured back by power -- Anwar has learned to be extra cautious," he said.

Sivamurugan, meanwhile, thinks UMNO is threatening Muhyiddin as part of a strategy to force a snap election, since recent public polling suggests this would end with a victory for the party led by Ahmad Zahid Hamidi.

Oh said the mainstream faction in UMNO is using the volatile situation to shop around for the best political deals. He called this the "usual" strategy of "taking advantage of the incumbent levers of power to offer political and other forms of inducements to retain support."