Comeback leader hints he will right the old regime's wrongs 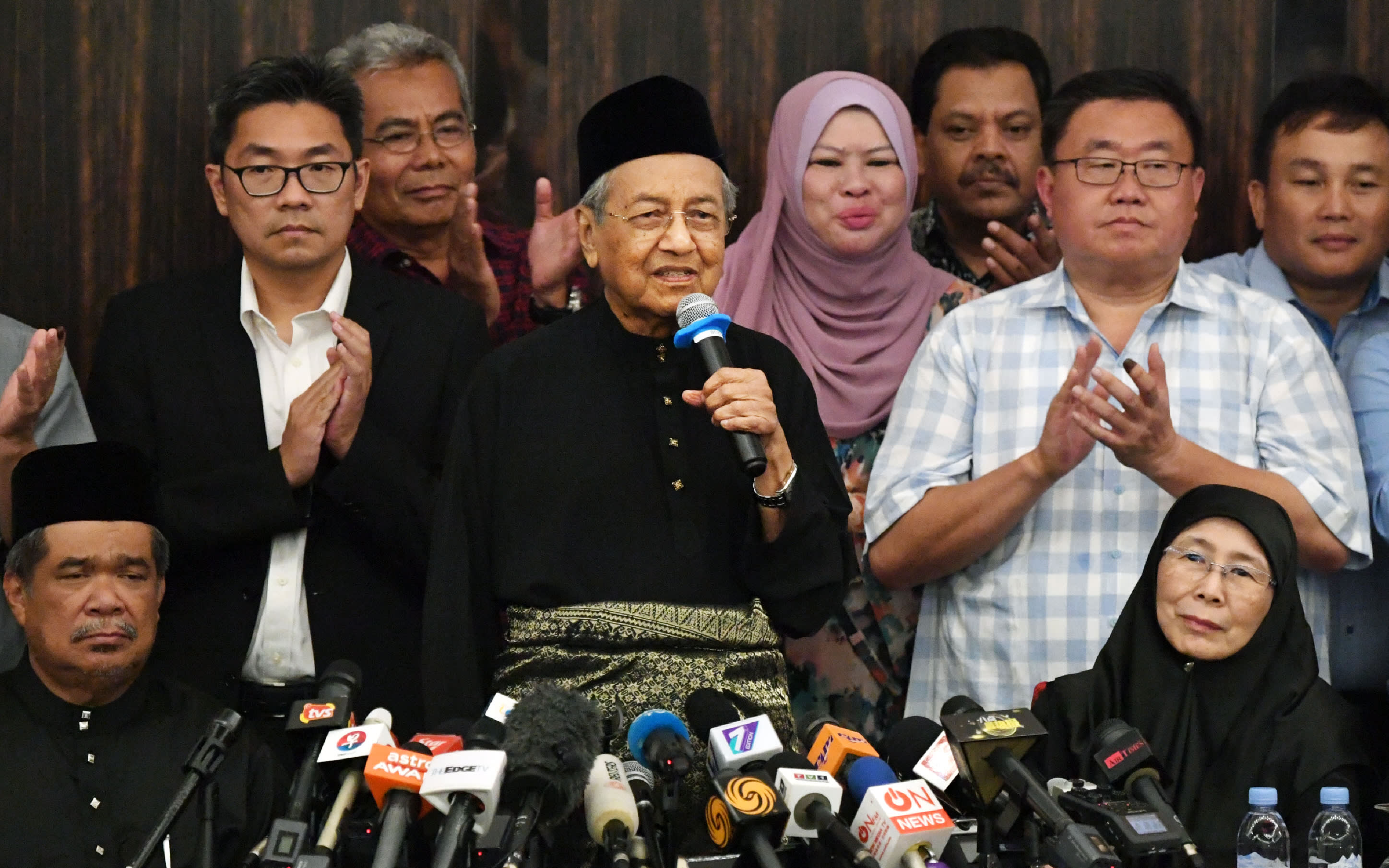 KUALA LUMPUR -- Mahathir Mohamad took the oath to become Malaysia's seventh prime minister on Thursday in a ceremony at the Istana Negara national palace, returning to power after nearly a decade and a half away.

"I pledge to fulfill all my responsibilities honestly," Mahathir said in Malay in a ceremony presided over by Sultan Muhammad V, the Southeast Asian nation's king.

Malaysia is a constitutional monarchy and parliamentary democracy where the king's role is largely ceremonial, leaving the prime minister to run the government. Mahathir, dressed in a black traditional Malay attire with sarong and headgear, met with reporters after an audience with the king.

"The crowds outside the palace were tremendous," a tired but jubilant Mahathir said to begin his press conference, referring to the hundreds of supporters who had gathered there in the evening.

He offered reassurances over the Malaysia Inc. pro-business policies in place since he served as prime minister from 1981 to 2003, where the public and private sectors worked together on the country's development. Mahathir also hinted that he would correct the wrongdoings of the previous government based on the rule of law. He promised to retrieve money allegedly mismanaged by state fund 1Malaysia Development Berhad, whose scandals contributed to predecessor Najib Razak's electoral defeat. The money is known to be "in the U.S., Switzerland, Singapore and other countries" where there have been investigations, Mahathir said to cheers.

The opposition Pakatan Harapan, or Alliance of Hope, led by the 92-year-old Mahathir, delivered an electoral upset to Najib on Wednesday, capturing a majority of 113 seats out of the 222 up for grabs in the lower house.

While the win is just one seat more than a bare majority, Mahathir told reporters earlier on Thursday that he was confident of securing a few more by drafting smaller, independent parties into the ruling coalition.

Najib's National Front managed to secure only 79 seats, a retreat from the 133 bagged five years ago. It also lost half of provincial state seats to the opposition. With its earthshaking loss, the National Front alliance entered the opposition for the first time since Malaysia became independent in 1957.

Earlier on Thursday, Najib created confusion at one point by telling the country on live television that while his ruling alliance had accepted the will of the people, it was also at the discretion of the monarch to appoint a prime minister. Mahathir immediately rebutted him, explaining that the leader commanding the most support from lower house members becomes prime minister regardless of how many seats his party wins in the election. Leaders from three of the Alliance of Hope's four member parties then sent the king a letter supporting Mahathir becoming prime minister.

The following weeks will be crucial in seeing whom Mahathir appoints to his cabinet, as most of the leaders in his coalition lack experience as ministers at the federal level.

He said a meeting will be convened Friday with party leaders to discuss key appointments. A new cabinet normally takes weeks to form, going by past precedent.

Equally important are the commitments the Alliance of Hope made to the electorate, including abolishing the unpopular goods and services tax and reviewing agreements signed with contractors from China.