WASHINGTON -- Alan Greenspan, former chairman of the U.S. Federal Reserve, expressed guarded optimism for the world economy in a recent interview with The Nikkei, downplaying the likelihood that market gyrations portend the bursting of another economic bubble.

At the same time, he cautioned that China's growth is likely to slow over the long term, that the U.S. needs to tackle entitlement reform, and that Greece will remain uncompetitive as long as it stays in the eurozone.

Q: Do you think the current turbulence in the markets is a temporary adjustment or a sign of another crisis and a bubble popping?

A: It's too soon to tell. The major problem is bubbles are not the issue at the moment. It's basically a long-overdue adjustment, and it's not clear how far it's going to go or whether we've already seen the peak. I know everyone has a forecast. But the evidence is very questionable at this stage.

The markets are very sensitive because China's endeavor to prevent the market from going down is actually working in reverse. ... It's very important to [recognize] that blocking transactions in financial markets always is negative to the price level, because to the extent that they prevent people from getting out with the next transaction, they feel very uncomfortable, fearful. And fear is the most dominant element which undermines financial structure.

So, I would basically say that I think the Chinese growth rate is going to be less than ... the conventional forecast. And the reason is essentially that as the level of productivity in China approaches the level of, say, the United States, the ability to borrow technology -- which is one of the major extraordinary capabilities of China over recent decades -- narrows. As you get closer, there's very little to borrow successfully with.

There's more and more borrowing to produce less and less [gross domestic product]. And that suggests to me that the borrowing levels have to slow down. And if that occurs, then it will be very difficult to maintain 7%, 8% growth rates.

Q: You wrote in your book that the seriousness of a bubble depends on the degree of leverage. In your analysis, bubbles are not a major problem in the financial markets at present? 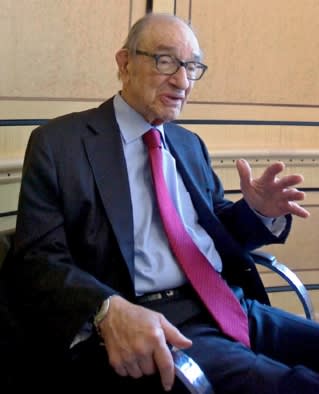 A: Well, remember, when we're dealing with the Chinese markets, there is the unknown extent to which the government stands behind all borrowings. I remember fairly recently that one of the shadow banks was paying, I think, 11% interest rather than the conventional 3%, and thereby attracted a very large number of high-income individuals who had the money to invest. I think Premier Li [Keqiang] said that they were not going to bail out poorly run companies again.

The people who complained most were those who, obviously, were holding the 11% coupons. So I think that this is not the same thing that has gone on in the United States. It's a different type of problem.

Q: The U.S. economy seems like it will grow between 2% and 2.5% over the next year. What is your assessment?

A: Well, the major problem in the United States is that even though the data which came out [earlier this month] show a significant increase in productivity for the second quarter. That's an aberration. That doesn't square with a lot of other data.

Most important is that productivity growth, not only in the United States but pretty much throughout the world, has slowed down dramatically, largely because capital investment as a share of GDP -- now, this is both East and West -- is down significantly.

So we're starting to have a much slower rate of growth in employment, with a subdued rate of output per hour. ... That's going to have very important political implications in the United States.

Q: Is the low productivity an aftereffect of the financial crisis or a more structural problem?

And [entitlement reform], as we say in the United States, is the most difficult thing to do for a politician. They believe that social benefits are the so-called third rail of American politics: You touch it, and you lose. And so, it's a fascinating discussion going on. Everybody knows it's the entitlement programs that are the problem, but nobody wants to discuss it publicly.

We have to go back and start to discuss this publicly, and we will, because it's going to get worse rather than better. And if our savings rate continues to fall, our gross domestic investment is going to slow down very dramatically. And that means that economic stagnation is the appropriate term for what we're dealing with.

So we have to come to grips with it. That is the most important problem, as far as policy is concerned. I think monetary policy is not an issue. We've already used monetary policy as much as we can. Now we've got to confront this issue. If we don't, we're going to have a significant problem.

Q: When do you think the Fed will or should raise interest rates?

A: That is a sensitive question. Ever since I left office, I've stayed away from answering that very specific question. My colleagues, former colleagues at the Federal Reserve, are acutely aware of everything.

I'm acutely aware of most of what they know, except the decisions at the vote of the [policy-setting Federal Open Market Committee]. I know what the research is showing. And if I knew what they were going to do, I wouldn't say, but I really don't.

Q: So the timing is very difficult? 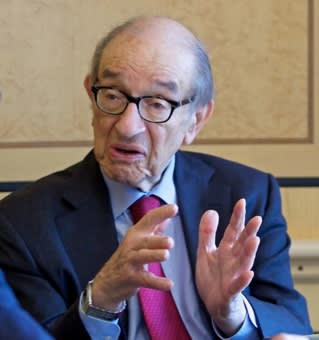 A: Very difficult. We haven't been here before. In other words, we've never had [quantitative easing] one, two and three. We've never had inflation this low for this long.

Usually the Federal Reserve and other central banks have no control over long-term interest rates -- until recently, when they started to buy up whole [bond] issue[s]; you can determine what the price is.

But that can't go on very much longer because, without getting into details, everyone is aware of the fact that the average inflation rate or, more exactly, the average long-term interest rate has been relatively constant at 4-6% for sovereign credit going back for hundreds of years. It's human nature which is determining that. ... I mean, interest rates in fifth century B.C. Greece were not terribly different from what they were in post-World War II Western economies. And, you know, the Bank of England has been having a daily posting of the discount rates in 1694 -- single digits all the way.

Now, that is telling us something about human time preference and, therefore, the relationship between interest rates, which is a major manifestation of human time preference. That tells you a great deal about where we are in today's market and where human nature, left to its own devices, will pressure.

And I think that's the most fundamental aspect -- not what the Fed is going to do, but the market pressures reflecting human preferences, pulling up the rates to what human nature considers normal.

Q: From 2004 to 2006, the Federal Reserve communicated very clearly with the markets. Now the timing of a rate hike will depend on the economic data. Do you think Fed Chair Janet Yellen's strategy is working?

A: First of all, let me just say, [Yellen] is a very smart woman and she worked with me, and she was on the Federal Reserve Board when I was chairman. And I often asked her to give me advice on certain academic things that had been going on. I always found her sufficiently smart that she adjusts fairly well. So I have full confidence in her [ability to do] what none of us can really do well -- mainly forecast where we're going from here. I [say] none of us can really do [it] very well, but she and her colleagues are first rate.

Q: How do you view the future of Europe?

A: When Greece came into the eurozone -- I think, inappropriately, in the sense that they had to meet certain criteria, and they just barely met them -- the government that met them fell from grace and a new one came in. The new [government] said that the data that the first one was using did not meet the [eurozone entry] criteria.

Now, the eurozone could have just basically said, "Well, Greece, you're out." But, unfortunately, they didn't. Greece at the current euro rate is badly competitively misaligned in the international markets. Its exchange rate is uncompetitive.

What used to happen before the euro is they continuously devalued. And if you looked at the history of, say, the drachma relative to the deutsche mark, it was continuously devalued until it [became] competitive. But once you look at the [single] currency, you can no longer do that and you have to borrow from abroad, and they have now run up huge debts. They can't fund them.

I don't believe that this last agreement is going to last very long, merely because what is required is a wrenching abnormality, when what Greece needs is the drachma. If it weren't for the history of Europe, Greece would have long ago been dislodged from the eurozone and acted competitively, because you can't have an exchange rate which is so oppressive that you're continuously squeezing it, and that is what is happening.