About a dozen women, many of them seasoned journalists, have taken to social media in recent days to share allegations of sexual harassment by MJ Akbar, 67, a junior foreign minister in the Modi cabinet. The harassment, according to the women, took place when they were newcomers to the field and he was a top editor. The accusations include invitations to his hotel room for job interviews, unwanted advances and forcible kissing.

"I extended my hand to him in gratitude, he shoved his 55-yr-old tongue down my 18-yr-old throat," tweeted Majlie de Puy Kamp, a CNN investigative reporter in New York, after HuffPost India published a story on Oct. 12 detailing her account of harassment when she was an intern at the Asian Age, the newspaper Akbar ran over a decade ago.

In a statement on Oct. 14, Akbar said the allegations "are false and fabricated, spiced up by innuendo and malice." Suggesting a political ploy, he asked, "Why has this storm risen a few months before a general election? Is there an agenda? You be the judge."

Before Akbar issued his denial, speculation was rife that he would be asked to quit. Yet Modi's Bharatiya Janata Party government, which runs several programs for women's empowerment, has been largely silent on the matter. Akbar, one of the few Muslims in the Hindu nationalist BJP, did not belong to the party during the period in question.

If the government allows him to stay on, it would suggest it agrees with his narrative that he is the victim of a conspiracy to undermine the BJP before the election, in which Modi will be seeking a second term. 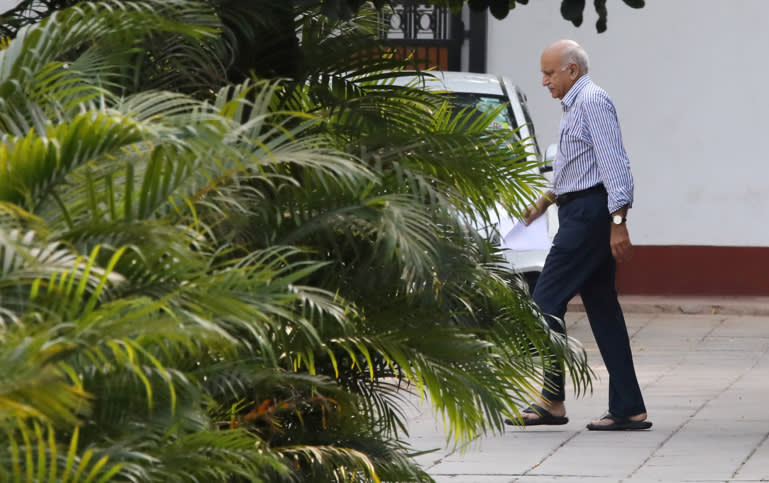 Akbar issued a statement on Oct. 15 calling the harassment allegations against him “false and fabricated."    © Reuters

Either way, the allegations give the opposition ammunition.

"It's about time everyone learns to treat women with respect and dignity," tweeted Rahul Gandhi, the leader of main opposition Indian National Congress, which has demanded Akbar's resignation. "I'm glad the space for those who don't, is closing. The truth needs to be told loud and clear in order to bring about change."

The impact could be felt well before the general election next April or May.

Akbar is a parliamentarian from the BJP-governed central state of Madhya Pradesh, which will hold a legislative assembly election next month. Some feel the scandal could work against the BJP there.

The party's poll managers "fear that it could dent the party's image as well as its poll prospects if the opposition, especially the [Indian National] Congress, decides to highlight it at a time when the ruling BJP is facing one of the toughest electoral battles in the state," the Asian Age said in a report.

The outcome of the state poll is expected to be a bellwether for the national vote.

The #MeToo movement -- which began as a hashtag on Twitter in 2017, when Hollywood producer Harvey Weinstein was accused of sexual harassment -- has been gaining momentum in India. In September, Bollywood actress Tanushree Dutta revived a 2008 charge of inappropriate conduct against noted actor Nana Patekar.

The #MeToo campaign is spreading to other fields as well. Suresh Rangarajan, the corporate communications chief of automaker Tata Motors, was sent on leave after allegations against him surfaced on social media. Prashant Jha, political editor of the Hindustan Times daily, had to step down in the wake of accusations by a former colleague.

Much like #MeToo unfolded in the West, new allegations are surfacing almost daily. And with election season getting into full swing, the wave could have make-or-break implications for both the ruling and opposition camps.