Li Zhanshu, one of Xi Jinping's most trusted confidants
Politics

TOKYO -- In the theater, capable choreographers and stagehands help to create a powerful performance. In China's political drama, President Xi Jinping is relying on a select group of trusted aides to shape his image and cement his own power.

Li Zhanshu, the director of the General Office of the Communist Party, is the leader's right-hand man. Li handles Xi's daily activities, a job that entails a host of responsibilities -- management of classified documents, correspondence, security and the president's health care. He also helps the president chart out key policies, including measures to fight poverty. 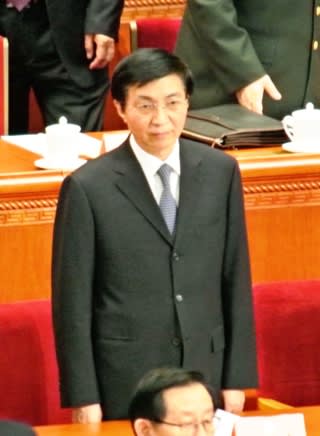 In January, Li accompanied Xi to a village in Hebei Province.

Pei Xiuping, a 48-year-old farmer in the village, was preparing lunch when the president stepped out of a car in front of his home. Upon entering the house, Xi fired off questions while munching on a fried sweet Pei had offered him. "How much do you earn?" "What do you grow?" "How is your child doing?"

Xi made a pledge: "We will pull you out of poverty, without fail."

Li, 66, also played an important backstage role when Xi met Japanese Prime Minister Shinzo Abe in the city of Hangzhou last September. Li huddled with his boss until 10 minutes before the summit, then disappeared through a back door.

Xi and Li became acquainted in the early 1980s, when the former was the party secretary of Zhengding, a county in the Hebei capital of Shijiazhuang. The latter held the same post in the neighboring county of Wuji. The two met at a municipal meeting in Shijiazhuang, according to Jia Chonghui, 84, who worked in the Wuji government at the time.

They were the youngest party secretaries and became friendly, Jia said. Like a big brother, Jia added, Li helped Xi handle a difficult relationship with a superior.

Li has proved himself to be a skilled administrator during his four-decade career, including regional posts in such provinces as Hebei and Shaanxi. His strong sense of loyalty may be even more valuable to Xi, who is famously wary of betrayal.

Kaichi Nitta, the 83-year-old chairman of a dairy farm business in Japan's northeastern Yamagata Prefecture, attests to Li's loyal character. The two have maintained close ties over the years, and when Li was appointed to his current post, Nitta wrote a letter to congratulate him.

Li sent a handwritten reply, signing it, "From your friend, Li Zhanshu."

At age 30, Wang became the youngest associate professor in China. In 1986, he released a treatise stressing the need for a concentration of power to push ahead with reforms.

"The French Revolution occurred due to the explosion of public anger at widespread corruption," Wang said in a lecture at Fudan University, a prestigious school in Shanghai, in the late 1980s.

One could argue we are witnessing those notions in action today, with Xi amassing power in part through a sweeping anti-corruption campaign that has taken down high-ranking bureaucrats and military officers. Recently, Xi was given the title of "core" leader within the Communist Party -- a status reserved for only a few key figures in modern Chinese history, including Mao Zedong.

For Xi, Li is the manager who draws up action plans, while Wang is the brain who provides a theoretical foundation.

Also playing a key role in the Xi show is Liu He, 65, a childhood friend of the president. He heads the Office of the Leading Group for Financial and Economic Affairs and is often referred to as Xi's "economic secretary."

On Feb. 28, Xi instructed Liu's office to prevent financial risks and promptly review the financial supervisory system. On March 5, when Premier Li Keqiang delivered his annual government work report, he warned that China must be "highly vigilant" about mounting financial risks -- a line that had Liu's fingerprints all over it.

Xi, who reportedly insists on deciding just about everything, has spent most of his first five years in power strengthening his grip -- trusting only longtime associates to help him do it. Act 2 begins this fall, at the Communist Party Congress.