Mekong nations get started on their own infrastructure fund 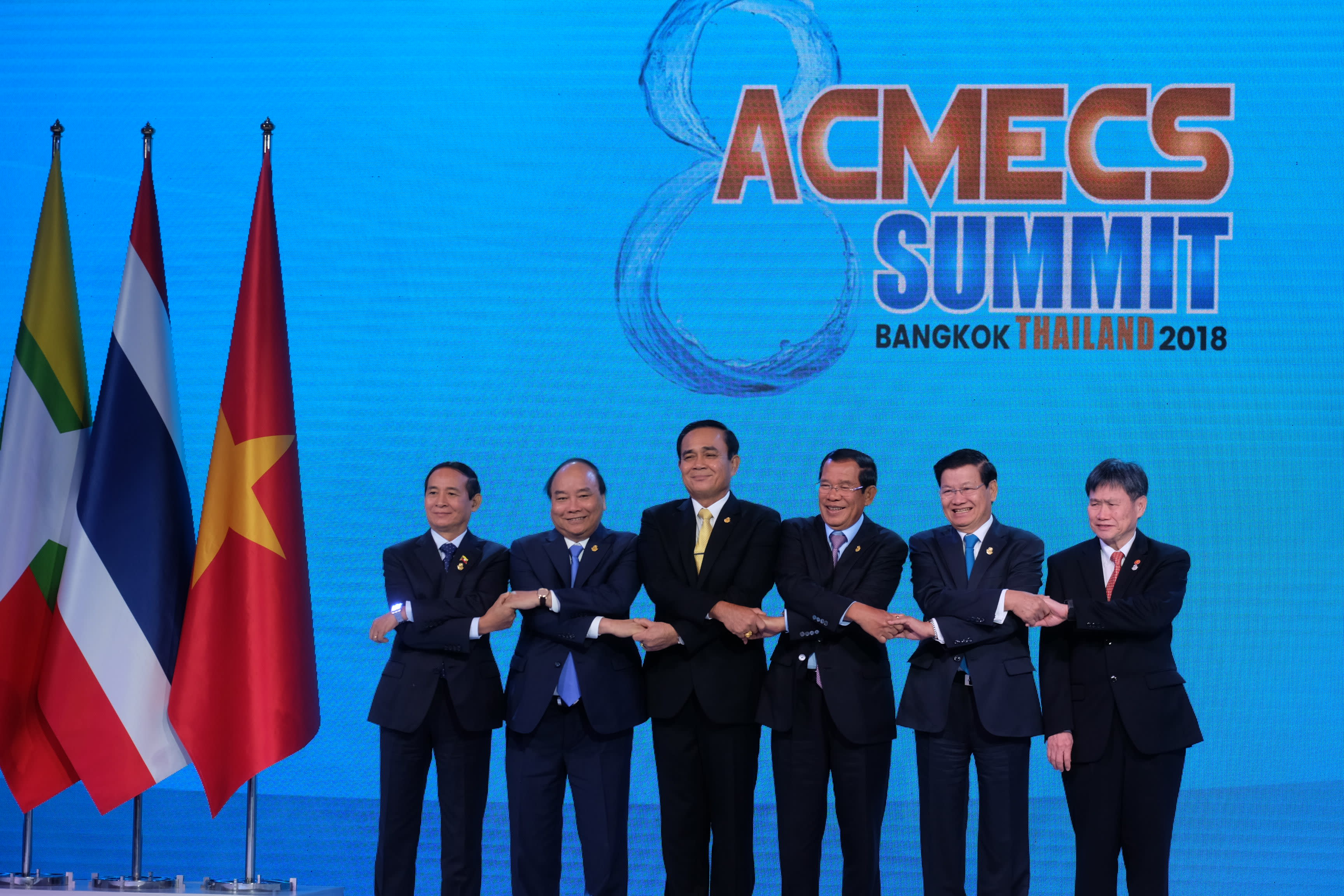 The leaders of Myanmar, Vietnam, Thailand, Cambodia and Laos as well as an ASEAN official show they are united in their desire cut some of the strings that are often attached to foreign infrastructure loans.   © Photo by Yukako Ono
YUKAKO ONO, Nikkei staff writerJune 16, 2018 21:12 JST | ASEAN
CopyCopied

BANGKOK -- Five nations that share the Mekong River on Saturday adopted a five-year master development plan, vowing to upgrade roads, power grids and other pieces of infrastructure that connect and strengthen the region.

“[We] believe that connectivity is the key to achieving economic growth and sustainable development,” Thai Prime Minister Prayuth Chan-ocha said in opening the summit.

The 2019-2023 ACMECS Master Plan prioritizes the completion of two important road links in the region.

One is the East-West Economic Corridor, which goes from the Vietnamese city of Danang, through Laos and Thailand, and winds up in the Myanmar city of Mawlamyine.

The other is the Southern Economic Corridor, which begins in Vietnam’s Vung Tao, crosses through Cambodia and Thailand, and finally delivers goods to the Myanmar city of Dawei.

Both corridors connect ports along the South China Sea to ports along the Andaman Sea, giving cargo an alternative to a long, V-shaped shipping route around the Malay Peninsula.

The member countries will also work on harmonizing trade and customs rules to speed up the cross-border transportation of goods. One goal is to shorten the time needed to get goods from one end to the other of the East-West corridor to 30 hours. The current travel time between these points is five days.

As for financing, Thailand proposed that the five partners establish an infrastructure fund. After the meeting, Prayuth told reporters that the proposal “received support” from the other leaders. They agreed to send senior financial officials to Thailand to discuss details in the second half of the year.

To kick start the fund and get it up and running by the end of this year, Thailand is set to contribute the initial tranche of cash. The amount will be in line with “related internal laws,” Prayuth said.

After the other four countries get on board, the fund's architects hope to invite the Japan-initiated Asian Development Bank, the China-led Asian Infrastructure Investment Bank and other international organizations to participate. Countries outside the region are also welcome to join, Prayuth said.

Situated in a strategic location between the Pacific and Indian oceans, the five Southeast Asian Mekong nations for decades have drawn investment and development aid from big countries outside the region. But much of this largess has come with political strings attached.

In recent years, China has been stepping up investment and increasing its presence in the Mekong region as part of its wide-ranging Belt and Road Initiative, which Beijing envisions as modern-day Silk Road trading routes that will bring continents and cultures together.

Laos and Cambodia have welcomed railroad and port development money but are giving away ownership of the projects as well as the underlying real estate. Debts have piled up in these poor countries.

“We saw a real need that we can at least become partially self-sufficient and less dependent [on external funding],” said Nikorndej Balankura, deputy director general of international economic affairs of Thailand’s foreign ministry.

Nikorndej, who was speaking after the summit, added that the fund will help “get all five countries to go in one direction.”

Senior officials from Japan, Australia and other countries encouraged the Mekong leaders during the summit's opening ceremony.

China has the five countries in a tight spot, and it was Chinese Premier Li Keqiang who first spoke to the gathering. Li reminded the Mekong leaders that the river begins in China and development of the region “calls for the joint efforts of all parties involved.” He concluded by saying, “China is ready to make unremitting efforts with countries in the region.”