Allied troops use a flamethrower during the campaign against the Japanese on Bougainville Island, Papua New Guinea in April 1944. (Getty Images)

SYDNEY-- Named after a passing 18th century French explorer, Bougainville Island has been governed successively by the German Empire, Imperial Japan, Australia and, since 1975, Papua New Guinea, which labeled it the Autonomous Region of Bougainville. On May 11, the island's 300,000 people will vote in an election that may pave the way for independence within five years, but could also rekindle tensions over mining that led to civil war in the 1990s.

Bougainville is blessed or cursed, depending on whom you ask. Its mineral deposits are so vast that from 1972 to 1989, royalties from a large open-cut copper and gold mine comprised 40% of the Papuan government's revenue. The mine at Panguna, run by a subsidiary of the U.K.-Australian mining group Rio Tinto, was shut in 1989 by a rebellion that started with grievances among landowners about compensation and immigrant workers.

Fork in the road

The violence spiraled quickly into a separatist war against the central government, led by the Bougainville Revolutionary Army and backed by local militia groups. At least 5,000 people died out of a population of around 140,000 at the time, some from the fighting, most from malaria and other diseases than ran unchecked as health services faltered amid a government blockade.

The civil war ended in a truce in 1997, followed by a peace agreement in 2001 that conferred autonomy to the island. Successful elections were held in 2005, 2008 and 2010. Peace has largely held, in spite of the continuing presence of armed groups around Panguna, including some who proclaim loyalty to the Me'ekamui Government of Unity, a rebel state declared in the 1990s. The upcoming election is the last before a promised referendum on independence or continued autonomy, scheduled to be held by 2020.

Whichever option the voters choose, the island faces a dilemma.

Bougainville's autonomous status gives it a separate police force and judiciary. The schools and health clinics damaged by fighting or neglect have reopened. Roads, airstrips and jetties have been patched up. Most of the work has been paid for by the national government in the capital, Port Moresby. Only 34 million kina ($13 million) of the autonomous government's 2014 budget of 312 million kina comes from local sources. Most of the rest comes from the central government, with a small portion provided by international aid donors.

There is little commerce in the province, with most residents living off subsistence farming or fishing. Cash crops are mostly limited to cocoa plantations whose output is worth about 180 million kina a year. Small mining operations at about 40 sites are manned by around 10,000 people panning for gold and operating primitive sluices. These are thought to generate about 75 million kina a year.

John Momis, outgoing president of the autonomous region and a candidate for re-election, is one of many who argue that to be truly autonomous, let alone fully independent, the island must reopen the Panguna mine, which could provide sufficient tax revenues to finance the government. But tussles over who will own and control the mine are already triggering tensions like those that led to the civil war. 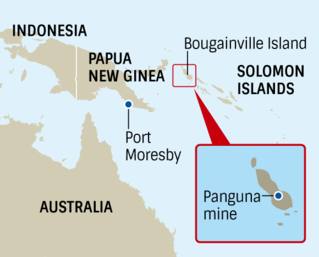 For a quarter of a century, the mine and the nearby Arawa township, built for its 3,500-strong workforce, have resembled the set of a post-apocalypse movie. Huge dump trucks sit idle and rusting; vines are draped from power pylons through which electricity has not flowed for years. Villagers camp in bungalows abandoned by mine managers, cooking on fires in the gardens.

A 2012 "order of magnitude study" by Bougainville Copper, a Rio Tinto subsidiary that ran Panguna and is 53.83% owned the parent company, concluded it would take at least five years to reopen the mine to produce 60 million to 90 million tons of ore a year. It estimated the cost at $5.2 billion and an operating life of 24 years.

Bougainville Copper has always said it wants to restart the Panguna operation. But the situation was complicated in March, when the autonomous government scrapped the company's mining lease and annulled a 1967 investment deal between the company and the former Australian colonial government. Bougainville Copper retains an exploration lease and right of first refusal should a new mining lease be offered -- but that would include much stricter requirements for environmental protection and consent from local landowners.

The company said the autonomous government's action has created uncertainty about the future of the mine, rather than helping to resolve it. Peter Taylor, Bougainville Copper's chairman, told shareholders at the company's annual meeting in Port Moresby on April 29 that it had written off the mine, which was valued in its books at 166.5 million kina. He said the company is considering legal options to protect its rights. Rio Tinto has said it is reviewing its stake in Bougainville Copper.

Others are mulling investments in Bougainville, although the Me'ekamui rebel factions may hold the key to any restart of large-scale mining. Interested parties include Lindsay Semple, a Canadian mining entrepreneur, who briefly held rights granted by the autonomous government to open mines other than Panguna; and Tall J, a subsidiary of a timber and mining group called Bougainville Development based in the U.S. state of Missisippi. Bougainville Development is 50% owned by Nevis Capital, an investment company based in the U.S. state of Nevada, according to a July 2014 disclosure by Nevis published by U.S.-based OTC Markets.

Anthony Regan, a constitutional lawyer at the Australian National University, and an adviser to the autonomous Bougainville government, said the two men appeared to be interested in participating in the reopening of Panguna. Regan recounted a meeting with Momis in February at which Johnston and Duncan argued that while Rio Tinto's Bougainville Coppper subsidiary should be given first refusal, it should have only six months to make a decision. Johnston did not return calls to his Sydney office.

"It's the only game in town and the buzzards are circling, some to gain advantage from the re-opening Panguna, some seeking to oust BCL (Bougainville Copper) so their preferred investor can come in, others opposing Panguna for fear that it would result in their favored projects not going ahead," said Regan, adding that he thought most Bougainvilleans would accept a return of Bougainville Copper to Panguna.

"Even the landowners are saying they want BCL to come back: They prefer the devil they know," he said. A new Bougainville mining law vests minerals in traditional lands with the traditional owners. Even so, resentment could reappear among local people and expectations for compensation payments are high, he said. Momis has made clear he is also concerned about a meeting in October between Papua New Guinea Prime Minister Peter O'Neill and the Me'ekamui group, as well as discussions between O'Neill and Rio Tinto. In several statements over the last six months, Momis has voiced suspicions that O'Neill is seeking to buy Rio Tinto's shareholding in Bougainville Copper. The central government already holds a 19.3% stake.

O'Neill has denied any such plan, saying in a letter to Momis on Jan. 30, "We are fully aware of the sensitivity of the mine issue, and the national government has no intention to take control of the mine in Bougainville."

Momis, a former Roman Catholic priest who entered Papuan politics in 1972 and helped to write the country's constitution, is the favorite to win the presidential election. Regarded as incorruptible and open to both continued autonomy or independence, he is widely seen as a safe pair of hands. Sam Akoitai, a former mining minister with the central government and Bougainville resistance figure, is also thought to have a chance of election. Three former rebel army commanders are also running, along with four less well-known candidates. Momis and Akoitai both favor pushing ahead with mining and upholding the referendum verdict.

"For these elections a huge amount is at stake -- the mining industry, jobs, and the referendum," said Regan. "This is the fourth Bougainville-wide election since the peace agreement, but there is 10 times as much at stake this time."

The likely referendum outcome remains unclear. Many of the dark-skinned Bougainvilleans regard lighter-skinned people from other parts of Papua New Guinea as alien -- they are often referred to in the province as "redskins."  Bougainvilleans feel a cultural affinity with the adjacent Solomon Islands, from which they were separated by colonial rivalry between Germany and Britain in the late 19th century.

Port Moresby has put more resources into the province as the referendum approaches, but its efforts may have come too late to overcome bitter memories of counterinsurgency campaigns by national police and soldiers in the 1990s. "Lack of support for the [autonomous government] from Moresby has loaded the dice towards independence," Regan said.

In a final twist in the Bougainville story, the province could be denied independence, even if that is the clear preference of voters in the referendum. Under the peace agreement, the implementation of a vote for independence is left to the national parliament, and agreement between the autonomous government and Port Moresby on the timing of the vote is contingent on judgments about the disposal of weapons and good governance in the province. "The truth is that we may need to rely on international community support at that time," Momis told the provincial parliament in March.