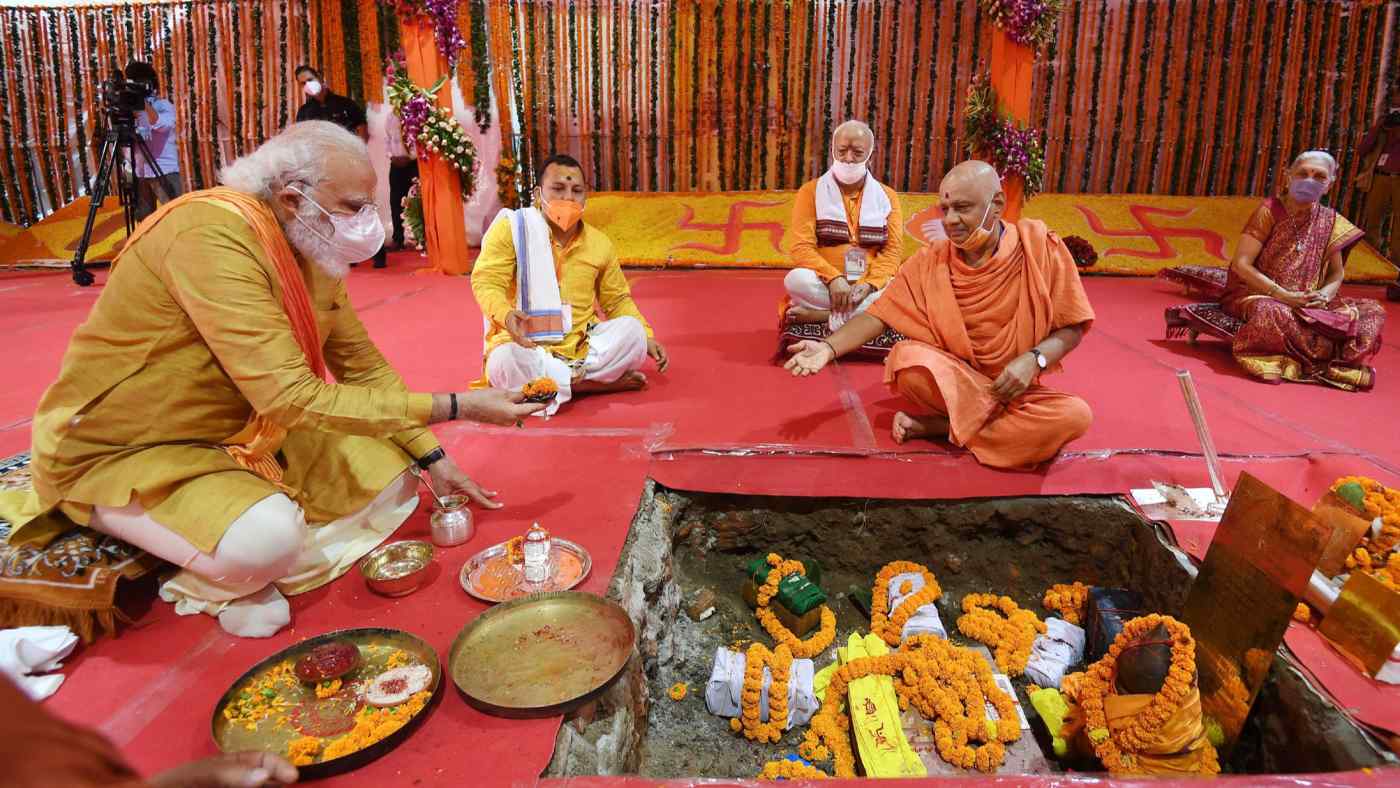 NEW DELHI -- Nearly three decades after a 16th-century mosque was demolished by Hindu hardliners, Prime Minister Narendra Modi on Wednesday visited Ayodhya, the site of the incident, to lay the foundation of a new planned Hindu temple.

The temple's construction, along with scrapping the semi-autonomous status of India's only Muslim-majority state, Jammu and Kashmir, have been part of election manifestos that brought Modi and his Hindu nationalist Bharatiya Janata Party to power and kept them there.

Critics say the party, which has been pushing these policies for decades, is keen to impose Hindu nationalism on a largely secular though Hindu-majority nation. Muslims make up 15% of India's population of 1.3 billion.

"Ram is the basis of our culture," Modi said after attending the event in India's north, referring to the Hindu god Lord Ram. The prime minister added the temple will unite the country and inspire the entirety of humanity until eternity.

Modi, who broke into chants of "Hail Lord Ram" throughout his speech, said there are dozens of countries where Ram's story remains popular in local languages. He named Indonesia, the most-populous Muslim nation; Thailand; and Sri Lanka. 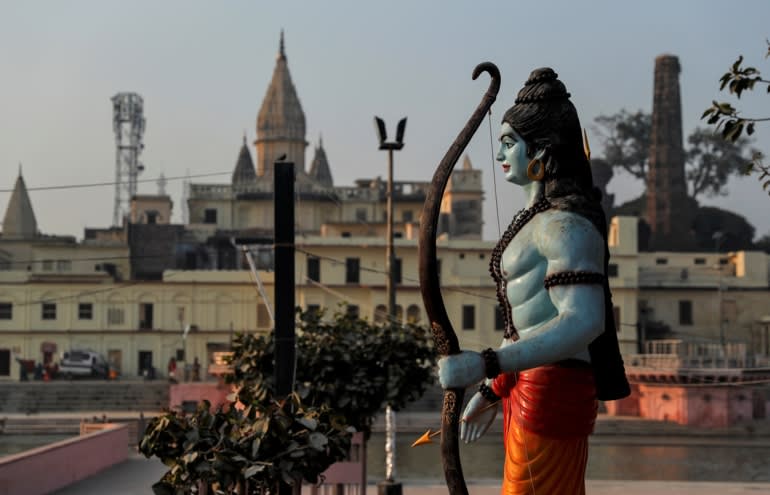 A statue of Hindu Lord Ram is seen after Supreme Court's verdict on a disputed religious site in Ayodhya, India.   © Reuters

"I believe millions of people in these countries too will be having a pleasant feeling at the start of the construction of the Ram temple," Modi said. "Ram belongs to everyone and is within everyone."

The event comes with the nation battling a coronavirus pandemic that has spread to over 1.9 million Indians and caused nearly 39,800 deaths in the country. Two of Modi's Cabinet members, close aide and home minister Amit Shah and oil minister Dharmendra Pradhan, have tested positive for COVID-19 and been hospitalized.

The ceremony falls on the anniversary of the revocation of the semi-autonomous status of Jammu and Kashmir, which has been divided into two federally administered regions. India and neighbor Pakistan have a long-standing dispute over Kashmir, with each country administering parts of the region.

"A dream close to my heart is being fulfilled," said BJP patriarch L.K. Advani, 92, who has been at the forefront of the temple movement since the late 1980s.

Celebrations were also seen in New York, where a large digital billboard in Times Square displayed images of Lord Ram and the proposed temple to be built in Ayodhya, despite calls from Muslim, human rights and secular groups asking advertisers not to show the images.

Ayodhya, a town in the northern state of Uttar Pradesh, had been blanketed with security personnel for the high-profile event.

Hindus believe the warrior god Ram, a reincarnation of Hindu Lord Vishnu, was born there and that Mughal Emperor Babur built the mosque at the site after pulling down a temple.

The court also directed the government to allot five acres in Ayodhya for construction of a new mosque. The Babri Masjid, or Mosque of Babur, was demolished by Hindu hard-liners in December 1992, triggering violent clashes that left some 2,000 people, mostly Muslims, dead. 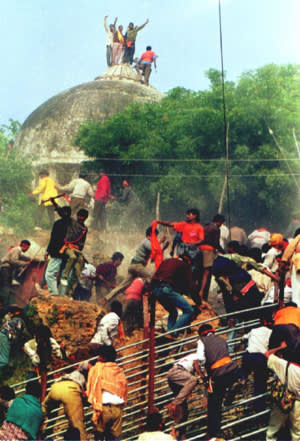 Hindu militants storm a disputed mosque-temple site on Dec. 6, 1992, climbing atop the building's dome as they demolish it to clear the way for a Hindu temple.   © Reuters

"Babri Masjid was and will always be a Masjid," the All India Muslim Personal Law Board tweeted ahead of the Ayodhya event. "Usurpation of the land by an unjust, oppressive, shameful and majority appeasing judgment can't change its status. No need to be heartbroken. Situations don't last forever."

Among those invited to the groundbreaking ceremony was Iqbal Ansari, one of the Muslim litigants in the Ayodhya land dispute case. "I believe it was Lord Ram's wish that I receive the first invitation," he told the ANI news agency. "I accept it."

Asaduddin Owaisi, president of All India Majlis-e-Ittehadul Muslimeen party and a member of parliament, last week tweeted that Modi attending the groundbreaking ceremony in an official capacity "will be a violation" of his constitutional oath. "Secularism is part of the Basic Structure of Constitution. We can't forget that for over 400 years Babri stood in Ayodhya & it was demolished by a criminal mob in 1992," the tweet says.

Priyanka Gandhi, a leader of the main opposition Indian National Congress, backed the ceremony, a shift of her party's stand on the issue. Lord Ram, she said on Tuesday, belongs to everyone. "Hope this event becomes an occasion for national unity, brotherhood and cultural harmony with the blessings of Lord Ram," she said.

Analysts say the reversal of positions came because the Ayodhya event is such an important development; they also say Modi's BJP is unlikely to gain much from it in future elections.

"The BJP has already peaked its support base in India's north [and] only the construction of Ram temple may not be enough for it to make huge inroads in southern states," said Sanjay Kumar, director of the Centre for the Study of Developing Societies. However, Kumar added in an interview with the Nikkei Asian Review, the popularity of the ruling party and of Modi in particular will become more durable among supporters.

The careful planning of the event, which comes on the anniversary of the Kashmir development, might also have lasting significance. "I suspect that in just a few years' time this day will be named as some day to signify growing importance of Hindus in Indian culture and politics," Kumar said.

"There is another aspect that this will push the Hindutva agenda in a more aggressive manner," Kumar said, though he feels a large part of India's population does not subscribe to it. "Since [the Ayodhya issue] dragged on for so long it got diluted in the minds of the common man [among both] Hindus and Muslims."