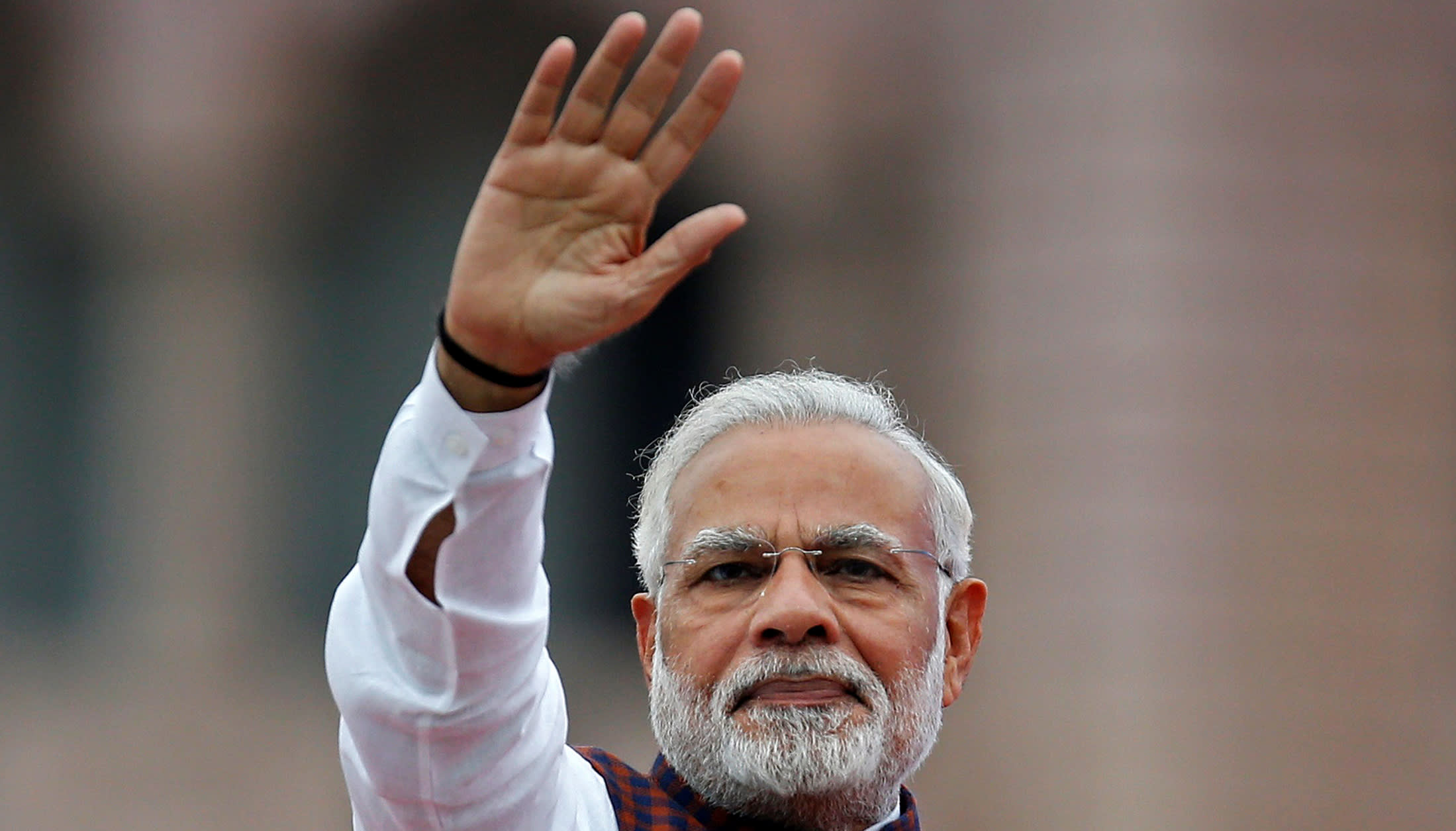 NEW DELHI -- Nothing has underlined the challenge facing Indian Prime Minister Narendra Modi better than the results of three key by-elections in the western state of Rajasthan. His Bharatiya Janata Party lost two seats in the lower house of parliament and one in the state assembly to the opposition Congress party by big margins. This was in a state where the BJP had won all 25 parliamentary seats in the 2014 national election after a huge 163-21 defeat of Congress in December 2013 state polls.

Thursday's shock results coincided with the unveiling by Finance Minister Arun Jaitley of an ostentatiously pro-poor central budget for fiscal 2018-19, starting April 1. At the top of the populist menu is an ambitious National Health Protection Scheme, promptly dubbed "Modicare" by skeptics, that aims to provide health insurance of up to 500,000 rupees ($7,800) annually to 100 million poor families. Jaitley did not spell out where the money to fund the insurance would come from. The scheme will expand an existing government health insurance program for which the budget provided only 20 billion rupees. Modi endorsed the budget in his own 25-minute speech following Jaitley's, stressing that the insurance program is "by far, the world's largest health insurance plan."

India's latest budget is as much a social road map as an economic blueprint for spending its way to growth. Battered by the aftereffects of the demonetization of high-value bank notes and the stressful introduction of a national goods and services tax, gross domestic product is officially projected to grow by 6.5% to 6.75% in 2017-18, down from 7.1% the previous year. Growth averaged 6% in April-September 2017. Rising inflation, continuing sluggishness in private investment, and negligible job creation -- combined with caste and religious fissures -- have dented Modi's popularity, although two recent polls said he is still favored to be the next prime minister. Growing murmurs say Modi may cash in his political capital to call early general elections late this year, although his term extends to May 2019.

The budget proposes spending 24.4 trillion rupees, a 10% increase over 2017-18. This will include 6 trillion rupees on infrastructure and a rise of 7.8% to 3 trillion rupees on defense. Jaitley broke his pledge to hold the fiscal deficit to 3.2% of GDP, saying it would come in at 3.5% in 2017-18, but he vowed to stick to the "glide path" of fiscal consolidation and aim for a deficit of 3.3% of GDP next fiscal year.

The deficit has been contained by adroit financial window-dressing. On Jan. 20, state-owned Oil and Natural Gas Corp. announced it would acquire the government's entire 51.11% stake in another state-controlled oil company, Hindustan Petroleum Corp., at a premium to its market valuation, yielding the government a 369 billion rupee windfall. The finance minister bravely promised to bring the ratio of government debt to GDP to 40% from the current 70% but did not specify how he would achieve that goal.

India is becoming hotter, drier, more extreme, and we calculate that agricultural incomes in the medium term could decline by about 25%

Clearly eyeing the rural vote in the Gangetic heartland, Jaitley kept breaking into labored Hindi in his speech, insisting that reforms had been implemented "without weighing the political costs." He noted that 86% of India's farmers were small or marginal, and the government would spend a total 14.34 trillion rupees on rural livelihoods and infrastructure in 2018-19.

Modi has promised to usher in a "New India" by 2022, by which time he wants to double farmers' income. He is gambling that steps like higher government procurement prices for all unsold crops, soil health cards, subsidized electricity, and a slow campaign to create an electronic marketplace that will eliminate middlemen, will mollify distressed and indebted farmers who are not getting a fair price for their produce.The agriculture sector is predicted by the government's statistics office to grow by a weak 2.1% in 2017-18, down from 6.3% in 2016-17, when food grain production totaled a record 275 million tons. Jaitley's Chief Economic Adviser Arvind Subramanian, who released a comprehensive Economic Survey for 2017-18 earlier in the week, said on television that agriculture would have to grow by 12.5% annually if Modi's pledge to double farm incomes is to be achieved. "India is becoming hotter, drier, more extreme, and we calculate that agricultural incomes in the medium term could decline by about 25%," Subramanian said, especially as there is a big divide between irrigated and unirrigated farmland. 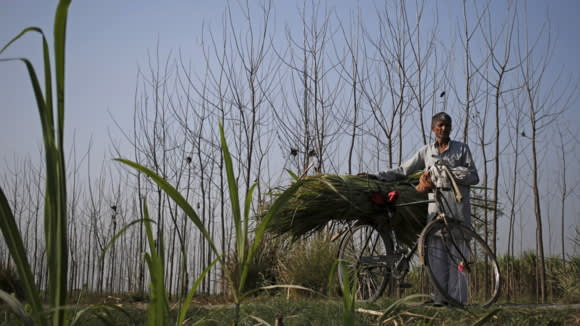 A farmer harvests sugar cane in the northern state of Uttar Pradesh. Modi has pledged to double farm incomes.   © Reuters

Kaushik Basu, a former World Bank chief economist and a predecessor of Subramanian's at the Finance Ministry, wrote on Jan. 25 that India's 6.5% growth in 2017-18 would be lower than its 30-year average. Basu said tightening liquidity in major economies would result in a drop in portfolio capital flows of between $55 billion and $70 billion over the next two years to emerging economies.

Jaitley said agri-exports, currently around $30 billion a year, could potentially rise to $100 billion annually, and the government would support this with steps like state-of-the-art testing facilities at 42 "mega food parks." India's exports grew by 12% to $223 billion in April-December 2017 from a year earlier, but this could be at risk, as the rupee has appreciated by 20% against a basket of currencies since 2014-15. India's overall trade deficit doubled to $70 billion in April-December 2017. Rising oil prices will boost the import bill and hurt the economy: Every $10 rise in crude prices could trim GDP growth by 0.2%. 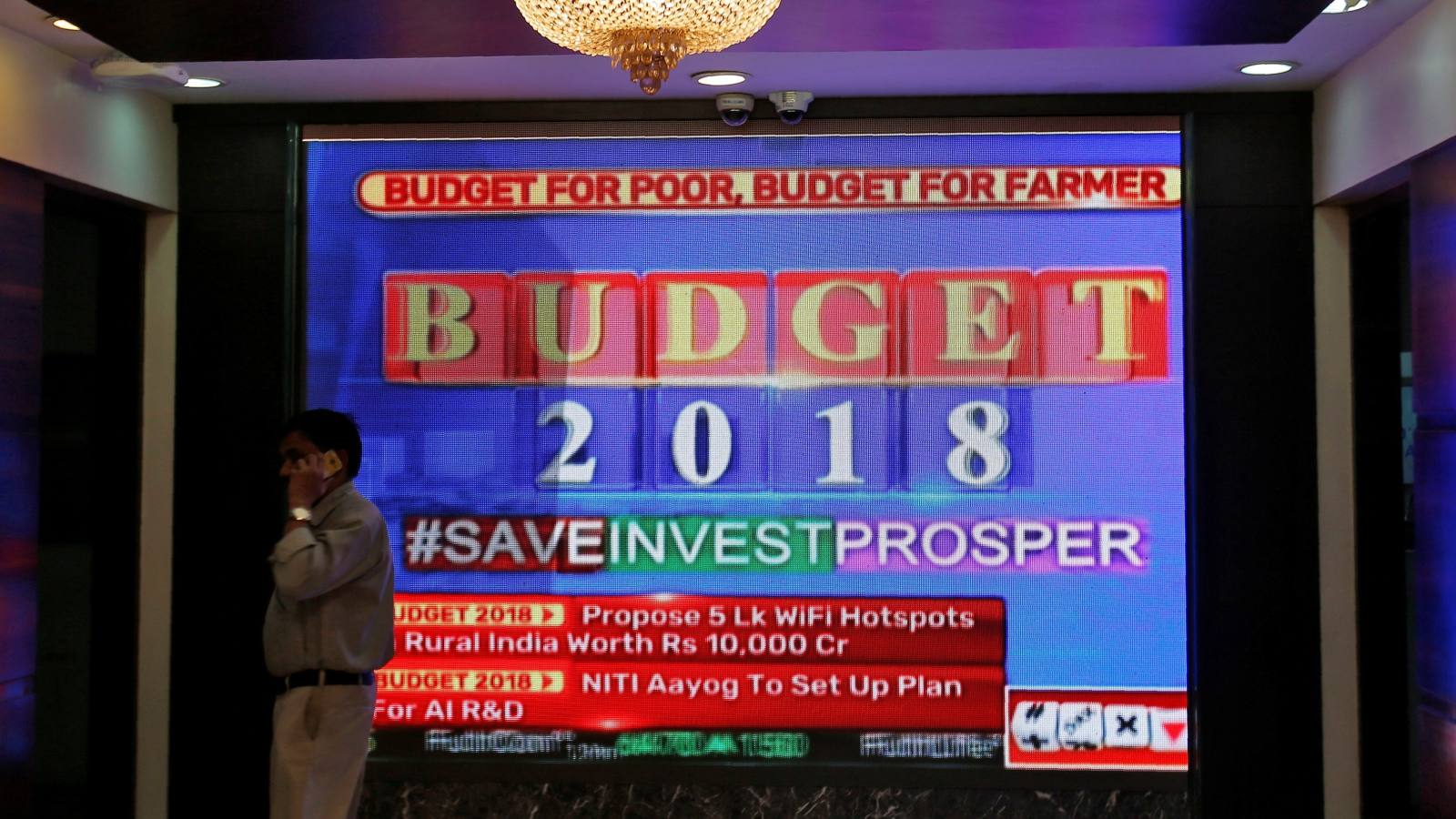 The Economic Survey said India, which will be the world's fifth-biggest economy in dollar terms, and is projected by the International Monetary Fund to be the fastest-growing country in 2018, spends a paltry 0.8% of GDP on research and development, compared with 2% in China, 2.8% in the U.S. and 4.3% in Israel.

In response, Jaitley announced an outlay of 1 trillion rupees over the next four years for a Revitalizing Infrastructure and Systems in Education program, known as RISE, as well as a Prime Minister's Research Fellows program that will sponsor 1,000 engineering students each year for doctoral studies. Here again, Subramanian observed that the scientific temper "of debate, openness, enquiry, lack of dogma, lack of religious obscurantism ... all of this is very important if we are to become a major producer of knowledge."