Modi pushes back against protectionism on Europe, Russia trip

The global uncertainty unleashed by U.S. President Donald Trump has two of Asia's biggest economies going on the diplomatic offensive. For India, the aim is to fight protectionism and continue reaping the benefits of globalization. For China, it is a welcome opportunity to play the part of responsible superpower. Both, however, are keen to win reliable allies as they confront a world that seems to grow more unpredictable by the day.

US Paris accord exit is historic retreat from rules-based order

EU, China trip in rush to lead on climate change

The trip was driven in part by growing uncertainty over President Trump's inward-looking policies. Trump has, among other things, roundly rejected global efforts to combat climate change. He referred to the Paris Agreement as "draconian" and claimed it was about "other countries gaining a financial advantage over the United States."

Meeting with newly elected French President Emmanuel Macron on June 3, Modi declared that India will side with Europe regarding the Paris Agreement. "[The] Paris climate agreement is a shared legacy of the world," the prime minister said. The day before in St. Petersburg, Russia, Modi had said, "Paris or no Paris, we are committed to preventing climate change for future generations."

Modi, who in the past had visited on average six countries every three months, curtailed his overseas forays after a trip to Japan last November as he dealt with domestic issues, such as demonetizing high-value bank notes to combat corruption and tax evasion, and campaigned for his party during local elections. Modi resumed his diplomatic offensive in mid-May, first visiting Sri Lanka before embarking on a weeklong round of talks with Germany, Spain, France and Russia.

The talks yielded few results in terms of large business deals on investment in India. Apart from agreeing with Russia to jointly construct two nuclear reactors in southern India, the prime minister limited his efforts to modest bilateral agreements, such as fighting terrorism and promoting educational and cultural exchanges.

MODEST RESULTS, BIG CONCERNS Such a marathon tour without much to show businesswise disappointed more than a few expat executives in India, including the Delhi-based chief financial officer of a Spanish company. "The prime minister of India went to my country for the first time in nearly three decades, but for nothing," he told the Nikkei Asian Review. "Modi had only a cup of tea and left." Modi stopped in Spain on May 31, between his visits to Germany and Russia.

His trip, however, seems to have been motivated more by strategic issues than by a desire to ink business deals. Nandan Unnikrishnan, vice president of Indian think tank Observer Research Foundation, explained the thinking behind Modi's outreach: "Europe has a role to play for the rest of the world, and we want Europe to understand that. This was the message from Modi through his trip."

India, whose per capita gross domestic product stands at just $1,800, still needs to reap the benefits of globalization, including direct investment and technology transfers from abroad. Modi himself was clear on this issue. At a May 30 business meeting in Germany, with Chancellor Angela Merkel in attendance, he said the "prime motive [for inviting investment] is creation of jobs and narrowing the gap between affluent and lower sections of society." 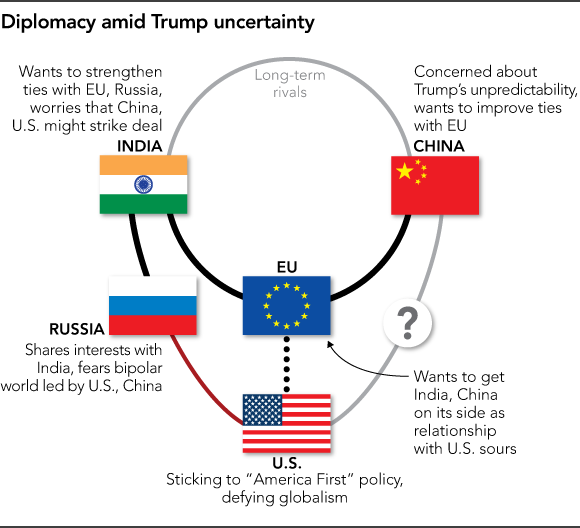 With the U.S. under Trump embracing protectionism and withdrawing from both the Trans-Pacific Partnership trade pact and the Paris Agreement, Modi is turning to Europe as a guardian of globalization. In talks with the German and French leaders, Modi seems to have sought assurance on this front.

He also brought his pro-globalization message to the annual St. Petersburg International Economic Forum, saying in a speech that "the world is no longer bipolar as it was a few decades ago." This reference to the U.S.-USSR rivalry of the previous century served as a thinly veiled warning of a similar scenario playing out again, this time between Washington and Beijing.

The prime minister fears that Trump and Chinese President Xi Jinping will strike a deal that essentially carves the world into two spheres of influence: China, which is pushing its Belt and Road infrastructure-building initiative, would control vast swaths of the Eurasian continent, with the rest of the world beholden to the U.S.

In this scenario, India would be considerably weakened vis-a-vis China in the Indian Ocean, as well as near the Himalayas and in Kashmir. Russian President Vladimir Putin likely shares similar concerns of being eclipsed by China.

India had pursued an omnidirectional and equidistant foreign policy aimed at maintaining its strategic autonomy since the 1960s, when the country's first prime minister, Jawaharlal Nehru, began advocating the non-aligned movement globally. Modi has changed all that. His focus is on building strategic partnerships with the U.S., Japan and Europe, while keeping a cautious distance from China due to Beijing's growing influence in South Asia and the Indian Ocean.

This desire for distance became apparent when India chose not to send representatives to the Belt and Road Forum held in Beijing on May 14-15. India's Ministry of External Affairs published a strongly worded statement the day before the event saying "no country can accept a project that ignores its core concerns on sovereignty and territorial integrity" -- this despite the Modi government's eagerness for Chinese investment to further its economic goals.

But the appearance of a U.S. president intent on protectionism must have come as a surprise to Modi, who is now forced to choose partners as much for their commitment to globalization as for their shared affinity for democratic principles.