India presents its Akash surface-to-air missile system at the DefExpo exhibition in the southern city of Chennai in April 2018. (Photo by Yuji Kuronuma)

CHENNAI, India -- Prime Minister Narendra Modi aims to turn his country into a major weapons exporter by attracting foreign investment and expertise, but India's lumbering bureaucracy and a complex procurement process stand in the way.

"India will not just manufacture for the purposes of import substitution, but will also boost defense production to export Indian-made defense products to countries around the world," Defense Minister Nirmala Sitharaman said April 11 at DefExpo, a biennial defense exhibition that opened in the city of Chennai on the same day.

But she later expressed doubts over pushing homemade equipment. "I can't for a moment imagine that I will prevail upon them that they necessarily buy what is Indian," she said.

India has the fifth-largest defense budget in the world, yet buys 60% of its arms from overseas. The Defense Research and Development Organization works on Indian-made products, but frequent delays usually render the equipment outdated by the time it comes off the production lines.

The Akash surface-to-air missile defense system is one such example. The DRDO spent roughly three decades developing the weapons, only to end up with rockets that lacked the latest tracking technology. India's army in 2016 said it would order no additional Akash missiles. 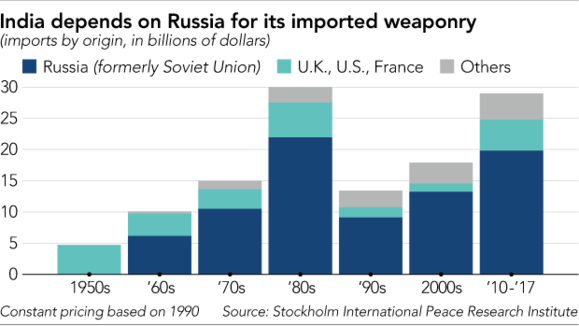 Modi reportedly was deeply disappointed by the DRDO after the Akash debacle.

India's reliance on foreign arms dates back to when it gained independence in 1947. The country bought more than half of its defense equipment from former colonial ruler Britain almost every year until 1961, according to data from the Stockholm International Peace Research Institute. As military assistance from the U.K. and the U.S. began to fade, New Delhi turned to Russia, then known as the Soviet Union, which has supplied the majority of India's arms for more than 50 years.

India has been the world's largest arms importer for much of the past 10 years. It spends $3 billion to $5 billion annually on equipment from Russia and elsewhere -- as much money as it would take to create 2 million to 3 million jobs at home, based on the nation's per capita gross domestic product. The country exports only $40 million to $60 million worth of arms yearly. Modi has promoted domestic industries under his "Make in India" campaign since taking office in 2014. Eager to attract overseas investment and knowledge in the military sector as with regular manufacturing, he raised the cap for foreign ownership in defense-related businesses to 49% in 2014 from the previous 26%.

Still, "we have not actually seen anything happening since then," an executive from Mahindra Defense Systems admitted to the Nikkei Asian Review at DefExpo.

The company, a unit of leading Indian conglomerate Mahindra Group, signed a deal with Boeing and Hindustan Aeronautics, India's state-owned aircraft manufacturer, at the expo to make fighter jets in India. Mahindra Defense also announced a partnership with Japan's ShinMaywa Industries to produce parts for the latter's US-2 search and rescue aircraft.

But the Mahindra Defense executive was skeptical when asked whether easing restrictions on overseas players would boost foreign direct investment. "If there are orders [from the defense ministry], FDI will increase. If there are no orders, even if 100% FDI is allowed, nothing will happen," the executive said.

Total orders for defense equipment are shrinking by value, with even orders from foreign players declining since a peak in fiscal 2013. Complex decision-making mechanisms inside the defense ministry, combined with Modi weighing his options from a diplomatic perspective before giving approval, slow the process. India's air force takes part in a drill at the DefExpo trade show in Chennai. (Photo by Yuji Kuronuma)

The push for domestic production might also be delaying orders. India increased the ministry's research and development spending by double digits in fiscal 2017. The army is now looking to order additional Akash missiles, despite having previously discarded the idea.

If successful, "Make in India" will bolster both the country's economy and military.

"It is not just on the battlefields, but also on the factory floors of defense manufacturing enterprises that strategic decisions are made," Modi said at DefExpo on April 12.