South Korean leader has yet to cool market, while aides accused of speculation SEOUL -- Over her 40 years of living in Seoul's Nowon district, Cho Hyun-sook has watched her neighborhood become denser and more expensive as more people relocate further away from central Seoul in pursuit of affordable housing.

She fears conditions are about to get much worse in Nowon, located in northeastern Seoul, as the government recently announced plans to build thousands of new residential units on the site of a large public park there. Cho and other locals say this would damage their quality of life by paving over a treasured green space that provides respite from the stresses of city life.

"Traffic here is already bad and the infrastructure is already strained. I can't imagine what it will be like suddenly having thousands more residents," Cho said. "Apartments have gotten so expensive in Gangnam and other famous areas, so now the government wants to come here and take our park away. It's unfair."

The envisioned development is part of measures announced in early August. They include the construction of 132,000 new housing units in the greater Seoul area by 2028, tax hikes to discourage speculative property purchases, and stricter limits on how much buyers can borrow against the price of a home. The government also plans to raise the maximum height of a residential building from 35 to 50 stories.

Nowon is one front in a growing national debate in South Korea over how to make housing more affordable as real estate prices are already beyond the means of many families, and still rising.

Throughout his term, President Moon Jae-in has made easing inequality a key policy goal, particularly through measures intended to create stable jobs and stem rising apartment prices. But more than three years into his five-year term, Moon has not managed to cool the property market, and many of his closest associates have been accused of the same kind of speculation that he pledged to root out.

Critics of the recently announced policies have argued that making it harder to borrow to purchase homes will leave more families stuck paying high rents and ultimately harm the fortunes of the middle class.

Last week, several of Moon's highest-ranking aides tendered their resignations after Moon ordered high-ranking government officials who own more than one home to sell off their extra properties. This was intended to create more supply in Seoul and as a gesture of solidarity with the public.

In a sign of public discontent, Moon's approval rating slid to 43.9%, down more than 60% a few months ago, according to a RealMeter poll released Monday. The same poll showed 52.4% of respondents saying Moon was doing a poor job as president.

After the resignations, "Power is brief but Gangnam apartments last forever" became a popular catchphrase on the Korean-language internet, as observers interpreted the resignations as indicating that the officials cared more about hanging on to their properties than any commitment to public service.

At a meeting with senior aides on Monday, Moon said that housing has become the country's "most pressing public issue" and vowed to take measures to increase accessibility and prevent speculation.

He struck an optimistic note, saying, "The effects of the government's comprehensive measures are gradually starting and will stabilize housing prices. I expect that trend to accelerate once the policies take effect in earnest."

Moon also named replacements for three of the aides who resigned. 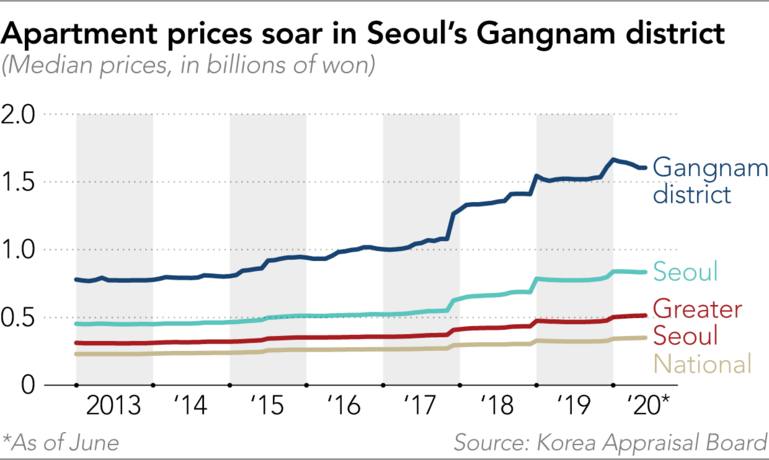 Moon and his left-leaning Democratic Party are customarily unpopular in Gangnam and other conservative areas, but his real estate policies appear to be displeasing even residents of working-class areas like Nowon that typically vote for his party.

On August 4, Nowon Mayor Oh Seung-rok, a member of the ruling party, issued an open letter to Moon asking for reconsideration of the plan, and for any new housing to be accompanied by efforts to expand public transportation and bring jobs to the area.

On the strength of the government's effective handling of what in February was the world's second-largest outbreak of the novel coronavirus, Moon's Democratic Party scored a resounding victory in legislative elections in April, giving the ruling party a strong majority.

Critics now argue that the Democrats are abusing that leverage to push through half-baked policies. In an editorial, the right-wing Chosun Ilbo newspaper criticized Moon for "acting like he owns the country," adding, "The president should change his mind before changing his staff. The government should stop managing state affairs through arrogance and self-righteousness."

Chosun decried the resignations of Moon's secretaries as "Just a show meant to deceive the public."

The left-wing Kyunghyang newspaper joined in the chorus of criticism, writing in an editorial on Friday: "The real estate policies have shown the Blue House's inability to function as a control tower for state affairs."

"With the market in turmoil, for real estate policy to be effective, the party, the government and the Blue House need to work systematically. Instead of playing that role, the Blue House caused confusion," Kyunghyang wrote.

Song Jung-min, one of the Nowon movement's main organizers, took part in a protest over the weekend where participants held placards with slogans such as "Heal, don't kill, Nowon." She takes issue with how the government selected Nowon as a site for development without consulting with locals, and wished that changes to the area were decided after an assessment of the possible effect on the community.

When asked her thoughts for how to solve the problem of rising housing prices in Seoul, she said she knew of no magic bullet. "Apartment prices kept going up in June, July and August. So clearly what the government is doing isn't working," Song said.

"They need to communicate with citizens and come up with a policy people can trust."