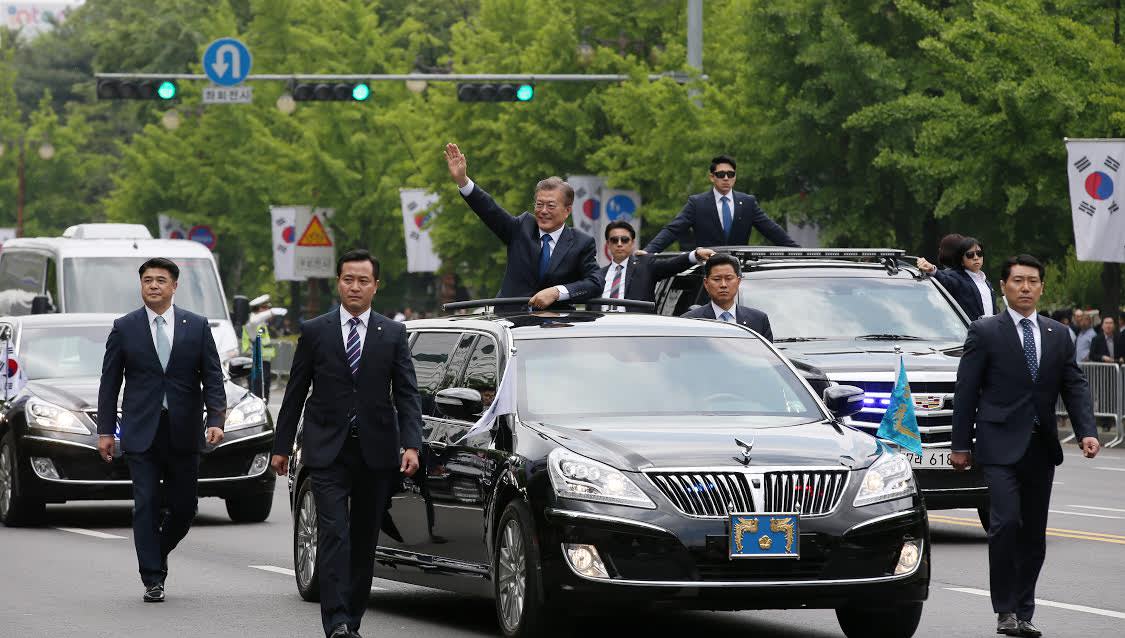 Moon, of the liberal Democratic Party, took office Wednesday, after winning the presidential election by a landslide of 41.08% the day before. Hong Joon-pyo of the conservative Liberty Korea Party came second with 24.03% of the votes, followed by centrist Ahn Cheol-soo of the People's Party with 21.41%.

"Under the Moon Jae-in government, politics-business connections will disappear," said Moon in his inaugural speech at the National Assembly at noon. "I will lead to reform chaebol."

South Korea's political elites are notorious for their close ties to big business, often awarding them roles in state projects in exchange for financial reward. The issue of corruption at the highest level was at the heart of this election that had been called early after the impeachment of former President Park Geun-hye.

Park is accused of pressuring conglomerates, including Samsung and Hyundai Motor, to donate tens of billions won to two foundations run by her friend Choi Soon-sil. Both Park and Choi are in jail but deny the charges.

The scandal has rocked South Korean society over the last year and has also sent Samsung Electronics Vice Chairman Lee Jae-yong to prison. Lee allegedly bribed Choi with 43 billion won ($37.8 million) to secure shareholder approval for his succession as the ultimate leader of Samsung Group. Lee denies the allegations and his case is pending.

Moon's promise to cut the influence of chaebol will be positive in the long run for South Korea, analysts said. "Strong anti-corruption, rule of law, and transparent corporate governance likely would be positive for the long-term outlook. In our view, these issues are long overdue," said Woo Jae-joon, an economist at Bank of America Merrill Lynch.

In the speech, Moon also outlined his diplomatic vision, saying he would visit Washington, Beijing, Tokyo and even Pyongyang if that helps ease tensions on the Korean Peninsula and bring peace to the region.

"I will fly to Washington right now if needed. I will also visit Beijing, Tokyo and Pyongyang if conditions are fulfilled," the new president said.

Tensions are rising in Northeast Asia as North Korean leader Kim Jong-un is threatening to conduct the country's sixth nuclear test as well as launch mid-range ballistic missiles into the Sea of Japan. U.S. President Donald Trump has warned Pyongyang that he would consider all options, including military action, in dealing with the rogue state.

Later in the day, Moon named South Jeolla Province Governor Lee Nak-yon as prime minister in a press briefing. His appointment needs approval from the Assembly. Before taking the office in the southwestern province three years ago, Lee had been a four-term lawmaker with the Democratic Party.