TOKYO -- A pair of pulse-thumping political dramas have gripped China, providing endless fodder for small talk in tea houses, bars and living rooms across the country.

Both are about corruption. They coincide with President Xi Jinping's signature anti-graft campaign. One, a TV series titled "In the Name of People," was broadcast this spring. The other is unfolding in real life, from a high-rise luxury apartment in Manhattan, and has yet to reach its climax.

It is the story of Guo Wengui, a Chinese billionaire who has fled to the U.S. It is there, through Twitter and YouTube feeds, he is creating complications for Xi ahead of a key leadership reshuffle at the Communist Party congress this autumn.

The TV show -- the party's latest big propaganda splash -- scored unprecedented ratings. As one might expect, the tale draws a clear line between the good guys and the bad, with the latter getting their comeuppance.

But the drama surrounding Guo is not so simple. It is part of a complicated tug of war between Team Xi and rival factions within the Communist Party, with both sides trying to portray the other side as the bad guys.

The optics could not be worse for Team Xi.

Since Xi rose to power -- first as the party's general secretary in late 2012, then as president in spring 2013 -- he has used an anti-corruption crusade to take down political foes. As head of the party's Central Commission for Discipline Inspection, Wang is leading the charge.

Guo has been dropping bombshells about the Wang family, and Xi rivals within the party are widely believed to be supplying ammunition.

"In the Name of People" attracted large audiences with its vivid -- and party-approved -- portrayal of rampant corruption in China. The hit TV series "In the Name of People" is based on this best-selling book.

One episode focuses on a corrupt top security official in a certain province, who colludes with a company and gets involved in a murder to silence a victim. The official also seeks to kill the head of a special investigation team, to prevent the authorities from closing in. He tries to commit the murder by making it look like a traffic accident.

Suffice to say, things do not end well for him.

Another episode focuses on a petty official who stashes yuan bills in a refrigerator in a secret room. When his thievery comes to light, he bursts into tears and says he was too scared to spend any of the money. 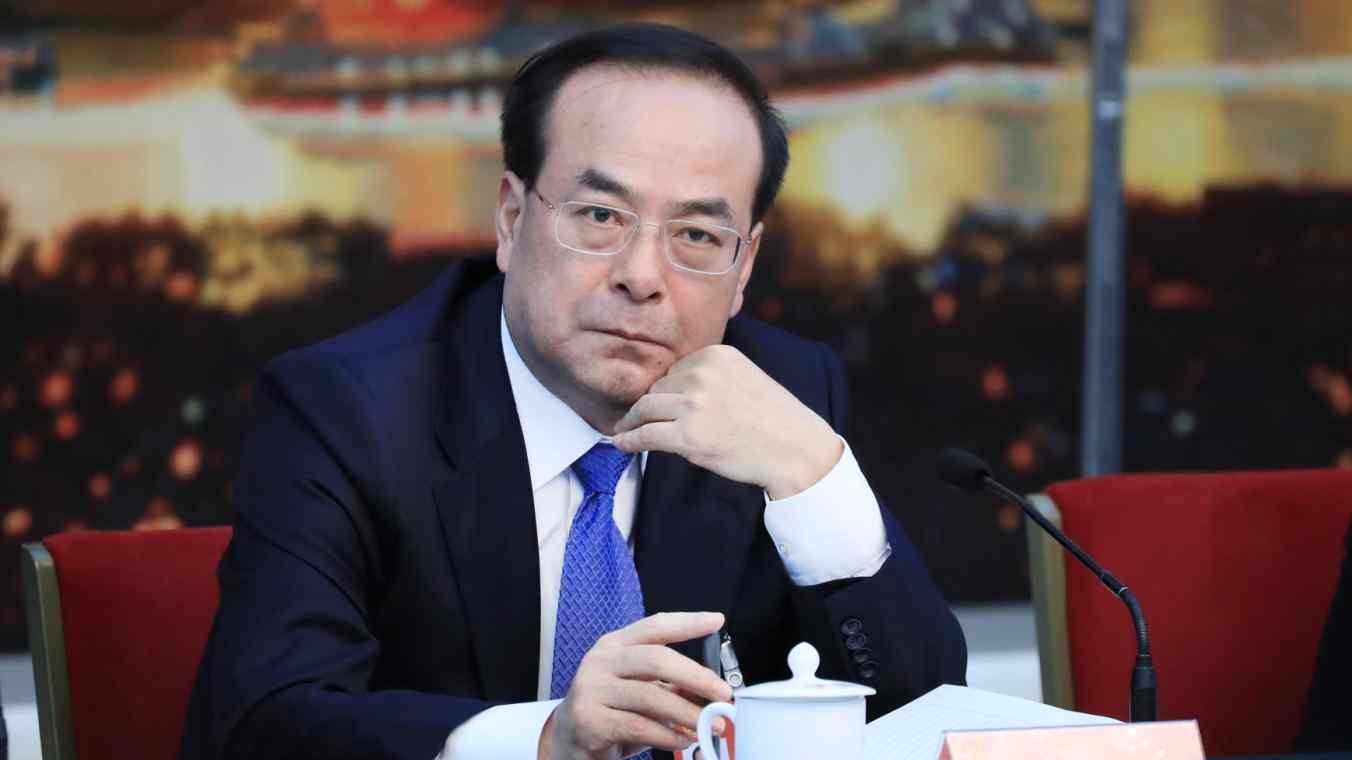 The drama seems to drop references to actual incidents. One episode features a fictional "Three Seasons Hotel" in Hong Kong, where the son of a national-level leader plots a crime with associates.

Naturally, the TV show was designed to play up Xi's performance and corruption-fighting prowess in the run-up to the party congress.

The Politburo Standing Committee, the party's top decision-making body, is due for changes at the twice-a-decade gathering. Most of the current seven committee members are supposed to retire due to age, leaving just Xi and Premier Li Keqiang who qualify for the next term.

This has sparked an intense struggle over the makeup of the next leadership team. Xi wants to strengthen his political hand by picking allies.

Guo, however, is proving to be a thorn in the side of the government -- even though he resides half a world away.

The tycoon built enormous wealth through real estate and other businesses around the time of the 2008 Beijing Olympics. He fled abroad after revelations of corruption at a Peking University-related company in which he was involved.

Guo is not a democracy activist. He is, however, the first Chinese billionaire to seek refuge overseas and then openly accuse the family of a Politburo Standing Committee member of wrongdoing.

He stole the spotlight with allegations of corruption involving Hainan Airlines and relatives of Wang's wife. Recently, he has also spoken of financing problems involving HNA Group and Deutsche Bank.

HNA Group, a Chinese conglomerate and parent of the airline, has become a major shareholder of the German institution.

Guo's dirt-dishing is a sign that the Beijing power struggle is escalating. It is also giving even ordinary Chinese a glimpse of behind-the-scenes political strife, via social media.

And the plot continues to thicken. Sun Zhengcai, the party chief in the city of Chongqing, is the latest high-profile politician caught in Xi's dragnet. He was removed from his post on July 15, and the party formally announced on Monday that he is under investigation for serious disciplinary violations.

Guo once praised Sun as a great politician. The two both hail from Shandong Province.

At one time, Sun was considered a prime candidate to succeed Xi. Now he finds himself at the mercy of the Central Commission for Discipline Inspection, which is under Wang's command.

The government seems to be doing everything it can to force Guo into a corner, as if he were the archvillain in "In the Name of People."

Earlier this year, Voice of America, the U.S. government-funded international broadcaster, abruptly terminated a live interview with the Chinese mogul. Despite the obvious implications for freedom of speech, high-ranking VOA officials apparently ordered the unusual move, likely in response to pressure from Beijing.

The Chinese Foreign Ministry announced that the International Criminal Police Organization, commonly known as Interpol, had issued a "Red Notice" for Guo. A red notice is a request to locate and provisionally arrest an individual at the request of a member country, but not an international arrest warrant.

The current president of Interpol is a former Chinese deputy public security minister.

In any case, Washington has given no sign that it intends to extradite Guo. For now, he is living it up in the U.S., where he is a member of President Donald Trump's Mar-a-Lago resort in Florida. Coincidentally, Trump hosted Xi at the estate in early April.

An exile depicted in "In the Name of People" is confronted with a far less cushy existence.

The fictional vice mayor of a certain city gets caught up in corruption, then flees to the U.S. He stoops to working as a dishwasher in a restaurant under the watchful eye of a snakehead, as Chinese human smuggling gangs are known.

Eventually, he heads to Africa, where he works at a mine, only to be shot dead by a sniper hired by the rogue son of a Chinese political bigwig.

Not only has Guo accused the relatives of Wang's wife, he has sought to drive a wedge between Xi and the top graft buster. He claims to have investigated the case secretly at the request of the Xi camp.

But why go after Wang in the first place?

One of the focal points of the looming leadership shakeup is whether Wang will remain on the standing committee. Back in 2002, the retirement age for members was set at 68, though this is more of a guideline than a rule.

Wang is already 69, but Xi likely wants to keep him on the committee.

"Even if Xi wants to do so, he will face a strong chorus of objections from within the party," said a source. The objections will come from Xi's political foes and party elders.

Those foes have faced setback after setback. The relentless anti-corruption drive has taken down many influential figures, including Ling Jihua.

Ling was a close aide to former President Hu Jintao, but was sentenced to life in prison for corruption.

Here, too, there is a Guo connection: He has claimed to be one of the few who knew the truth about an accident involving Ling's son from the very beginning.

The son was killed in March 2012, when his Ferrari crashed in Beijing. Ling tried to cover up the accident, but this led to his downfall and had a significant impact on the formation of the Politburo Standing Committee five years ago.

In the past, Guo had personal ties with China's Ministry of State Security, an intelligence agency. He was close with Ma Jian, a former vice state security minister. Ma has since been detained for corruption and appeared on television to make a "confession."

Ma, in turn, had links with Zhou Yongkang, a former Politburo Standing Committee member who managed the security ministry. Zhou, a Xi enemy, was purged in the anti-graft drive and sentenced to life in prison.

Guo's bombshells are illuminating this shadowy world -- though there is no telling whether they are actually true.

An even bigger question: Are there larger political forces driving the billionaire's whistleblowing campaign, as many suspect?

In the case of "In the Name of People," the main villain is a prominent Chinese leader. The individual eventually falls from power, but the series ends without showing his face.

When it comes to Guo, is a similar shadowy figure pulling the strings? That is the center of discussions at the aforementioned tea houses and living rooms.

The government is grasping for ways to deal with Guo. Chinese media organizations have typically shied away from the matter, but the tides changed on July 10, when the Xi administration launched a counterattack. The state broadcaster, news agency and other major outlets began covering Guo extensively, including allegations that he has been obtaining information by illegal means.

Xinhua News Agency now describes him as "one of China's most-wanted fugitives."

Will Guo's disclosures have any impact on the Politburo Standing Committee lineup? We will have to wait until the autumn party congress for the answer. As things stand, the bond between Xi and Wang appears solid.

Wang played a significant role in Sun's fall, as well as Chen Min'er's rise. Chen, a Xi protege, replaced Sun as Chongqing's top official. But the president still needs to find a convincing excuse for Wang to break the unofficial retirement age rule.

In this chess match, Wang Qishan is the piece upon which the entire game hinges.