Parties in runoff split on whether to accelerate dam development THIMPHU -- Bhutan will vote for a new government on Oct. 18, with one of the main election issue centering on the economic benefits and challenges that the small Himalayan nation would face over the construction of dams intended to supply electricity to its much bigger neighbor India.

The two main parties jostling for government support the construction of hydropower plants. But they differ over the speed that the hydropower projects should be expanded.

While Druk Phuensum Tshogpa is aiming to boost energy-related revenue by accelerating construction of the hydropower plants, Druk Nyamrup Tshogpa is more cautious, wary that rapid expansion could result in the accumulation of debt, potential cash flow problems and a dependence on foreign labor.

One of the two parties, who are both in opposition, will form the next government after the ruling People's Democratic Party was eliminated in a surprise upset during a preliminary round of voting in September.

Also in the picture is Bhutan's relationship with China, with whom it has no formal relations. The armies of China and India confronted each other last year on the disputed Bhutanese territory of Doklam at a border junction of the three countries.

Expanded hydropower development would likely strengthen Bhutan's ties with India, which has financed most of the development projects in the kingdom since the 1960s. Hydropower exports to India have been the primary driver of Bhutan's rapid economic growth in recent years. The economy is expected to expand by 7.1% in 2019, according to the latest forecast by the Asian Development Bank.

In contrast, Bhutan has no formal diplomatic relations with China, although the two countries have signed agreements to settle border disputes.

"Hydropower is the only resource and we want to achieve 10,000 megawatts by 2025," said Pema Gyamtsho, 57, an agronomist and president of DPT.

Hydropower revenue could be used to address other issues such as unemployment and poverty. "As long as we have capital we can solve a lot of other issues" he said. 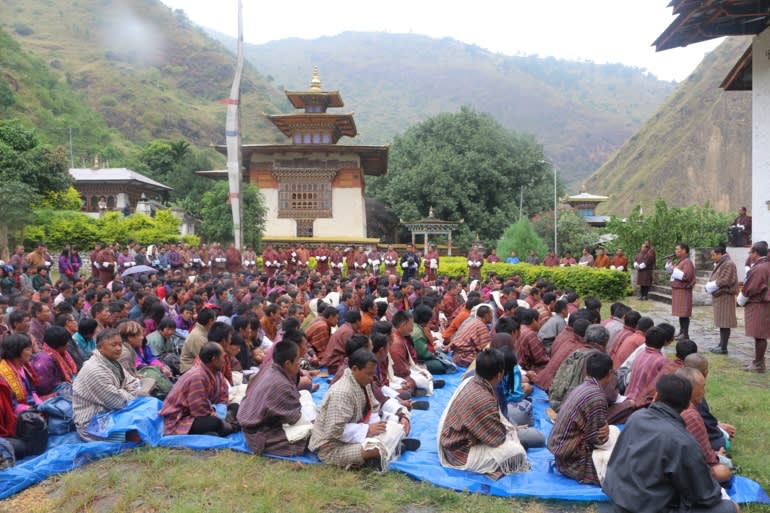 The DPT is campaigning on a platform of achieving national economic self-reliance by 2035, helped by hydropower development. Its leader argues that this goal is important since Bhutan will lose access to concessional funds as it graduates from least developed country status to a middle-income country.

The DPT, which has been in power once before, favors a pro-market approach, with the participation of the private sector in the construction process. "It is not going to be a blind plunge. We will keep a watchful eye on feasibility, viability and the implications for the economy and the environment," the DPT leader added.

Meanwhile, the DNT is focusing more on social issues, such as reducing unemployment and improving the quality of and access to the country's free health services. It argues that the money borrowed to build the hydropower plants would be better spent alleviating social problems

"Hydropower is the nation's main source of revenue but it has not been able to solve the unemployment issue, which is our immediate concern," said the DNT's former president and party media spokesperson, Tandi Dorji. "The [hydropower] sector has been able to employ only 2% of the Bhutanese workforce."

"We will have to wait 15 years to see the actual benefits of a hydropower project, but we have issues that need to be addressed immediately," he added.

The DNT last year expressed concern that the hydropower debt levels were becoming worrisome due to construction delays and the ballooning costs of ongoing projects. The government responded that under the power purchase agreement with New Delhi, India has agreed to buy all surplus power on a cost-plus basis, including a net return of 15%. This significantly reduced the risk of debt distress, it said.

Most of the debt is owed to India, which is financing four out of the five hydropower projects that are under construction. Bhutan has already paid off the debt on two existing projects financed by India and will complete payments on a third this year.