YANGON -- Myanmar's daily count of confirmed COVID-19 cases is rising rapidly. With case numbers doubling every week recently, opposition parties are calling for the November general elections to be postponed.

In six weeks parliamentary elections will be held to determine who governs Myanmar for the next five years. In 2015, enthusiasm was in the air. That year, the country's first democratic elections were held, with the National League for Democracy fully participating after decades of military rule.

This time around, the feeling is subdued. The campaign officially kicked-off on Sept. 8, but large gatherings are prohibited in Yangon, the country's biggest city. Street corners do not have candidates making their normal stump speeches. The Union Election Commission has banned campaigning in areas with stay-at-home orders.

According to the health ministry, as of Friday, total confirmed cases in Myanmar stood at 8,515, with 155 deaths. As of mid-August, there were fewer than 10 confirmed infections a day; by Thursday the number had ballooned to 868.

The government has imposed a strict lockdown in Yangon to slow the virus. On Sept. 11, domestic flights were canceled and residents were banned from leaving the city. Checkpoints are in place on highways. On Monday, work-from-home orders were implemented for offices and factories in Yangon, except for those dealing in essential items such as food and medicine. Supermarkets and convenience stores are still open, but traffic in the city is falling day by day. The U.S. Embassy on Thursday warned Americans that the stay-at-home orders "will be more stringently enforced in the coming days by local law enforcement."

The restrictions on movement also apply to local media. Journalism was not included among essential industries and many newspapers have not been able to print since Monday.

"I want the people to understand how much importance our union government has given to this matter, and how much effort is being put in for the health and security of the people, to the best of our ability," said State Councilor Aung San Suu Kyi, the country's de facto leader, in a televised speech on Monday. 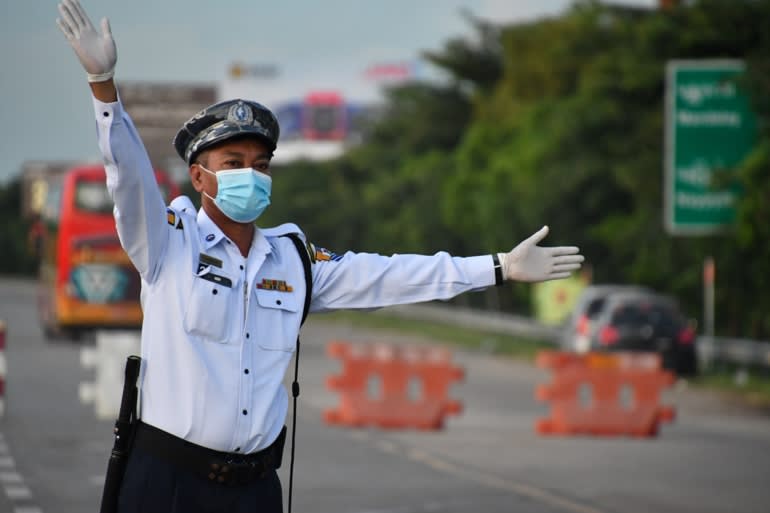 A police officer directs traffic at a checkpoint in Yangon on Sept. 11. (Photo by Yuichi Nitta)

Myanmar's health care system is fragile and hospital beds needed to cope with the pandemic are in shore supply. More than 45,000 people were quarantined as of Monday and a temporary quarantine facility has been set up on a soccer field in Yangon.

One resident of the city, a 58-year-old rickshaw driver, spoke of his hardship. "Normally I earn at least 10,000 kyats ($8) a day," he said, "but I am not even sure I could earn 3,000 kyats now. The local authorities are using loudspeakers on the street to let people know that there is a curfew in place. Currently, only people who want to buy food come out. Customers are disappearing."

Despite the difficulties, he still supports the ruling the NLD. "As far as I know, Aung San Suu Kyi is really trying hard to control and prevent the virus. I think this government is doing good for our country," he said.

But the opposition is demanding that the vote, scheduled for Nov. 8, be postponed. More than 20 parties, including the largest opposition party, the military-affiliated Union Solidarity and Development Party, asked the commission to postpone the elections. Workers construct a quarantine facility on a soccer field in Yangon on Sept. 15 (Photo by Yuichi Nitta)

The NLD, for its part, is determined to press ahead. NLD spokesperson Myo Nyunt told Irrawaddy, a local news outlet: "Postponing the election when it is uncertain how the situation might develop in the future will simply result in more problems, including a political crisis on top of the current public health and economic problems."

The election commission has ruled out a delay. "We have no plan to postpone the entire election, or the election in any constituency, due to COVID 19. We will arrange for people to vote safely, and we are discussing [measures] with the Ministry of Health and Sport," said a senior official in an online briefing.

The pandemic is a double-edged sword for the NLD. Power in Myanmar is finely balanced between the civilian government and the military. Even if the election commission had chosen to push back the election, there is no guarantee the situation with the virus would improve.

On the other hand, the pandemic could put the NLD in a favorable position vis-a-vis the opposition, given the restrictions on campaigning and the advantage that better-known incumbents enjoy over opposition challengers.