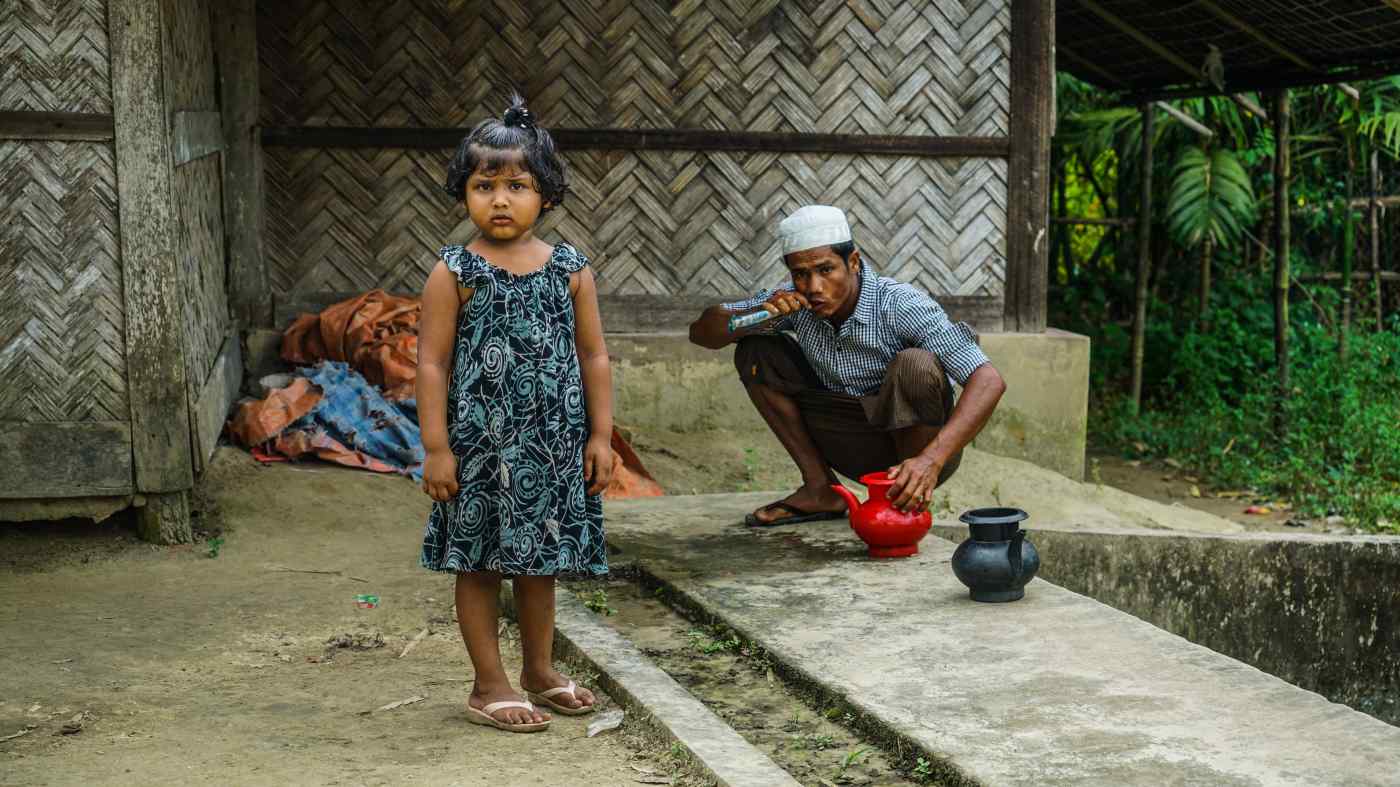 A man and a girl stand outside their home in a village in the state of Rakhine, western Myanmar, in 2018. (Photo by Cape Diamond)
CAPE DIAMOND, Contributing writerOctober 30, 2020 16:18 JST | Myanmar
CopyCopied

YANGON -- Anger and despair is spreading among the Rohingya in Myanmar before the country's general election on Nov. 8 as many in the Muslim group have had their citizenship stripped and are barred from voting or running for parliament.

Tayub Uddin, 65, is a Rohingya politician in Yangon and serves as a senior vice chairman of the Democracy and Human Rights Party, a Rohingya political party. While he is actively participating in politics, his family members in Rakhine State, located on the country's western coast and home to many Rohingya, are not recognized as citizens.

"My parents used to have the National Registration Card, but today, they are not recognized as citizens anymore," Tayub Uddin told Nikkei Asia. "All of the people were issued that card in the 1960s. Even [Myanmar's de facto leader] Aung San Suu Kyi and her father General Aung San used to have that card," he added. "We were enjoying our rights [in] those days."

The Myanmar government issued the tri-folded NRC card in the 1960s but in 1989 started to replace it with pink-colored Citizenship Scrutiny Cards. Most of the Rohingya had their NRCs taken away.

Rohingya won seats in previous elections starting in 1939 and several lawmakers were elected in 2010. But not since. This year, like in 2015, Rohingya candidates, including politicians from the DHRP, are forbidden to run. The Union Election Committee cited as a reason that authorities could not confirm the citizenship of their parents when candidates were born, a criteria to be elected to parliament under the law.

Even after the final list of candidates announced by the UEC in early September, several were disqualified. "How come my father could serve as the police officer if he was a foreigner?" Dus Muhammed, a DHRP politician told Nikkei. Dus Muhammed was supposed to run this year from the party but was later disqualified as the UEC said his father was not a citizen when he was born.

"According to the law, candidates can be disqualified anytime, even after they passed the final step, if we find something that does not meet the criteria," Myint Naing, a member of the election commission, told reporters during an online press conference in October.

The Myanmar government is applying the 1982 Citizenship Law and the Election Law to "disenfranchise Rohingya and prevent them from running for office, even though most Rohingya families have lived in Myanmar for generations," Human Rights Watch, or HRW, said in a statement on Oct. 5.

The right to vote is also fragile. Rohingya who hold temporary registration certificates, known as "white cards," were able to vote in the 2010 general elections. However, in 2015, the military-backed government announced that those with the documents were no longer eligible and they were not allowed to vote that year. The military-controlled government announced that the "white cards" -- provided to many minorities as provisional citizenship documents -- would expire.

"We are not considered as citizens," Saed Makhlaswi, a Rohingya living in the village in Sittwe, the capital of Rakhine State, told Nikkei by phone. "Even though some of us have eligible documents to have the chance to vote, there is no preparation of the ballots nor voter registration in our area. It is like the election is not going to happen in our area."

There has been no political dialogue to solve the Rohingya citizenship issue in the last three years since the Advisory Commission on Rakhine State, chaired by former UN Secretary-General Kofi Annan, announced a final report in 2017. The report stated that the 1982 Citizenship Law is "not in compliance with international standards" and urged the Myanmar government to abolish "different distinctions between different types of citizens."

Campaigners are deplored by the situation.

"It's appalling that Aung San Suu Kyi is determined to hold an election that excludes Rohingya voters and candidates," Brad Adams, Asia director at HRW said in its statement earlier this month. "She knows that real democracy cannot flourish in an apartheid regime imposed on the Rohingya." Rohingyas on the Myanmar-Bangladesh border speak to local and international media during a Myanmar government-sponsored tour in 2018. (Photo by Cape Diamond)

During the 2017 military operation, more than 750,000 Rohingya from Myanmar were driven out of the country into refugee camps in neighboring Bangladesh. Myanmar subsequently has faced a genocide charge at the International Court of Justice, though Aung San Suu Kyi, who won the Nobel Peace Prize in 1991 for her efforts to democratize the country, has denied the allegations.

Other ethnic groups, even for those who possess citizenship, are also unable to vote in November. As the election approaches, the UEC announced that it was canceling the polls in parts of states such as Rakhine, Kachin and Kayin as well as the Bago region due to "security concerns."

Most of the areas have a large ethnic minority population. As a result, 1.5 million people will not be able to cast ballots. HRW criticized the UEC on Wednesday, saying it "has made critical decisions without meaningful transparency."