NLD claims more than two-thirds of seats up for grabs YANGON -- Myanmar's National League for Democracy, led by Aung San Suu Kyi, claimed victory in the Nov. 8 election even while votes were still being counted.

Here are five things to know about the election.

Myanmar citizens 18 and older cast their ballots for seats in the upper and lower houses of parliament, of which 75% of the total were up for grabs. The remaining 25% are reserved for the military. The ruling NLD says it secured more than two-thirds of the contested seats, the amount needed for a winning majority.

When the final results are confirmed, a joint session of both houses will select a president and make other important decisions.

It was the third election under the constitution promulgated in 2008 by the military junta. In 2010, Suu Kyi and the NLD boycotted an election. As a result, the majority of seats were occupied by the military-affiliated Union Solidarity and Development Party. The USDP went on to form a government led by President Thein Sein, a former military general.

The military-backed government released Suu Kyi a few weeks after the election. She subsequently won a seat in parliament in a by-election in 2012. In 2015, the NLD won its landslide victory.

Why such strong voter support for the NLD?

Suu Kyi, a Nobel Peace Prize laureate and daughter of national hero Gen. Aung San, is the symbol of Myanmar's democratic movement. The 2008 constitution prohibits a person who has a child with foreign citizenship from becoming president. Her late husband was British, and the couple's two sons have foreign citizenship.

Though the Rohingya issue has tarnished her reputation abroad, she remains the most popular figure at home, especially among the ethnic Burman and Buddhist majority, who account for roughly 70% of the population. 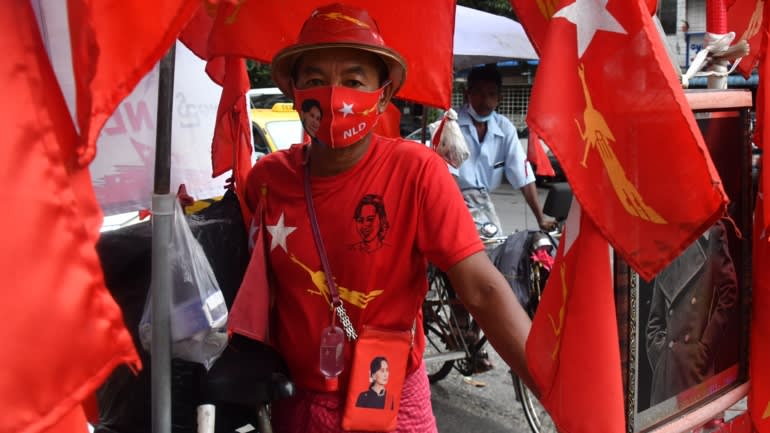 A supporter of Aung San Suu Kyi and the NLD in Yangon on Oct. 19. (Photo by Yuichi Nitta)

How will the outcome influence ethnic tensions?

Ethnic minorities account for around 30% of Myanmar's population. Several ethnic armed groups that emerged under the military junta are fighting for the right to self-administer and to form confederations.

Since 2015, the NLD promised them peace and national reconciliation, but Suu Kyi failed to achieve both. Despite peace conferences, many ethnic people suffer amid civil wars.

Suu Kyi's efforts to resolve ongoing conflicts have made little progress, and many have little optimism for headway in a second term.

How will the outcome influence the military's political power?

The military appoints 25% of the lawmakers in both chambers. In addition, the USDP, the largest opposition party, is military-affiliated. It often aligns with the top military leaders to vote on bills.

Even though the constitution gives power to the president on many issues, defense and security are the domain of the commander in chief of the military. The military also is able to appoint three cabinet members -- the ministers of defense, home affairs and border affairs.

Amending the constitution remains the most important agenda item for parties seeking a true democratic transition. But amendments can only pass if 75% of all lawmakers vote in their favor. This gives the military veto power. The NLD has pushed for constitutional amendments to reduce the military's power, but there is no sign of a breakthrough.

How will the outcome affect economic policy and foreign businesses?

The Myanmar Sustainable Development Plan (MSDP), was outlined in 2018 as a long-term blueprint to modernize the economy. It focuses on developing infrastructure and will continue to be the backbone policy after the elections.

Diplomatically, China will continue to be Myanmar's most important foreign partner, though the government will aim for a balance with Western countries as well as Japan and India. Depending too much on China is unpopular and poses security risks.