NAYPYITAW -- Neither economic development nor peace with Myanmar's ethnic minorities can succeed without the other, de facto leader Aung San Suu Kyi told a forum on the Southeast Asian nation's democratic transition, signaling a more balanced policy approach is on the way.

When Suu Kyi's National League for Democracy took office in March 2016 as the nation's first civilian government in a half-century, ending armed conflict between the country's many ethnic minorities and the Burman majority was at the top of the agenda. Economic growth, however, fell by the wayside: Shifting policies sowed confusion, companies pulled back on investment and the local currency entered a slide -- to the business community's chagrin. 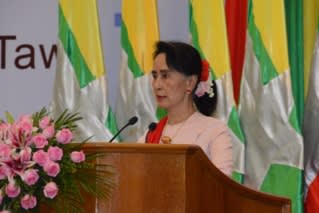 But times have changed, the state counselor said Friday in a speech to around 200 business leaders, state officials and visiting dignitaries at the Myanmar Democratic Transition Forum. "We can't divide peace and development," she said.

Historically, Myanmar has "lacked" opportunities for growth, "while our neighbors are developed," Suu Kyi said. "But there are advantages in following from the back: We can take the experiences as lessons from the countries which are already developed," she noted. The government in July tapped Set Aung, a former deputy governor of the central bank and chairman of the Thilawa special economic zone, as deputy minister for national planning and finance. Suu Kyi last week visited a new electrical facility serving a rural farming village, as part of her mission to promote electrification and economic development.

But the leader also said she "totally disagree[s]" with the widely held notion "that development is more important than peace."

"If we don't have peace, the development will not be durable," Suu Kyi said, adding, "at the same time, if there is no development, we can't get peace; we have to try for both." This is why the government is "trying first to stop the civil war in this country," she said, referring to ongoing efforts at peace talks with armed groups, primarily in Myanmar's north.

The Democratic Transition Forum, which runs through Sunday, aims to provide concrete guidance on how Myanmar can strike this balance as it transitions from a battle-scarred military state with a centralized economy to a peaceful, market-oriented and civilian-led society. Experts from academia, international organizations and governments around the world are gathering to discuss various facets of this process. "Myanmar's political transition stands out as an example of a planned transition," National Security Adviser Thaung Tun said in a discussion Friday, drawing contrasts between this country and Egypt, where stalled democratization has devolved into regional instability, or Thailand, where dissatisfaction with the government's economic policies sparked a coup d'etat.

But Myanmar business magnate Serge Pun criticized the government's economic policies so far, saying the "economy in our country is not difficult to fix."

"I don't believe that the government is trying hard to make it happen, realizing that they lost some time," he added.

Michael Vatikiotis, a journalist working in Southeast Asia, praised the two-pronged strategy Suu Kyi addressed. He said that as peace efforts advance in regions controlled by armed minority groups, "it is important to have, in parallel, an economic development strategy which addresses the weakness in economy in those areas, so that the leaders of those groups can be withdrawn to the table."