YANGON -- Ahead of a general election on Nov. 8, the Myanmar government, ruled by State Counselor Aung San Suu Kyi's National League for Democracy, has started to demonstrate its seriousness in buttressing the coronavirus-affected economy.

The daily number of new cases sharply rose amid a second wave from September to mid-October, peaking at 2,158 on Oct. 10 and still hovering around 1,000. However, a doctor at a Yangon quarantine facility who asked not to be identified said the number of patients is falling as those who have completed their 10 days of isolation are discharged.

The government is gradually easing restrictions on movement in order to reopen the economy. With the garment and tourism industries -- the country's major industries -- hit hard, the World Bank estimates that Myanmar's gross domestic product will grow by just 0.5% this year.

On Oct. 12, the government eased work-at-home orders for Yangon that had been in place since September. Also abolished was the requirement to obtain a QR code as verification that a person was allowed to travel by vehicle across townships.

Suu Kyi said in a televised speech on Oct. 19: "Our people have had to struggle quite a lot for their livelihoods. [The government] will see how much we can do and how we need to provide assistance." According to Thaung Tun, a senior member of Suu Kyi's cabinet, the government will soon announce a package of policies, called the Myanmar Economic Recovery and Reform Plan, to attract foreign investment and increase jobs.

After taking office in 2016, Suu Kyi's administration initially focused on peace talks with ethnic armed groups, and the business community perceived that the government was not putting economic reforms among its priorities. But in the past two years, the NLD-led government has shown signs of speeding up economic reforms, such as liberalizing the insurance market and foreign bank licensing. The ruling party is now striving ahead of the election to show its efforts on the economy.

Thaung Tun argued in the state newspaper that foreign investors' interest has remained resilient. "For the first time in years, Foreign Direct Investment for a single budget year has surpassed $5 billion," he wrote, referring to FDI approvals. 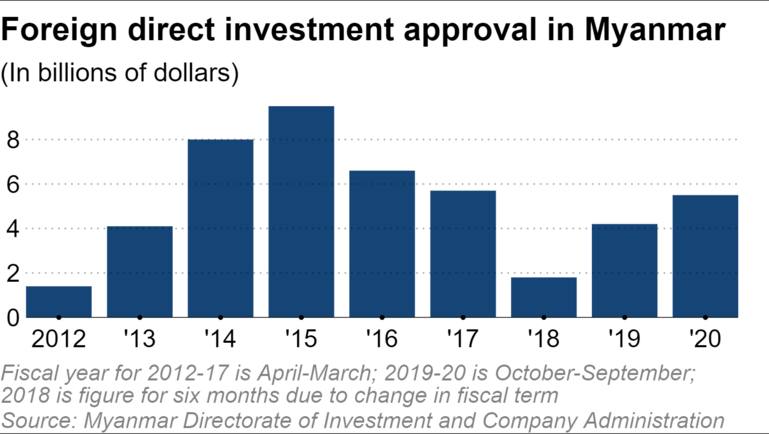 Both local and foreign businesses have criticized the government's ability to run the economy as it rolled out a series of controversial policies and bad decisions over the past few months.

The most recent example is the commerce ministry's decision, during the election campaign season, to award special permits to import cars for senior public servants -- a proposal that was suspended amid an industry backlash.

Antoine Jeanson, who heads the European Chamber of Commerce Myanmar automotive group, said in a news conference on Oct. 9 that an estimated 11,000 permits would be issued, in a nation where annual sales of new cars are only about 30,000. "This situation (lacking transparency) is extremely detrimental for businesses in a time when they should be supported," he said.

The energy ministry also pushed through a controversial solar plant tender with an extremely short bidding window, effectively excluding many companies, despite protests by foreign governments and business associations. The tenders were issued in May, with most of the projects swept up by bidders involving Chinese companies.

Shortly before the election campaign period began, the government announced a plan in July to set up a new special economic zone (SEZ) with a deep seaport in Mon state, on the strategic transportation route connecting Yangon and Bangkok.

"The government is showing it is serious about Myanmar's manufacturing ambitions and desire to attract foreign direct investment with this announcement," said Tomoaki Yabe, a Japanese who runs a logistics company headquartered in Yangon.

"If established, the new SEZ would be well placed to entice export businesses, taking advantage of its competitive labor cost," Yabe said. "But the government needs to speed up things."