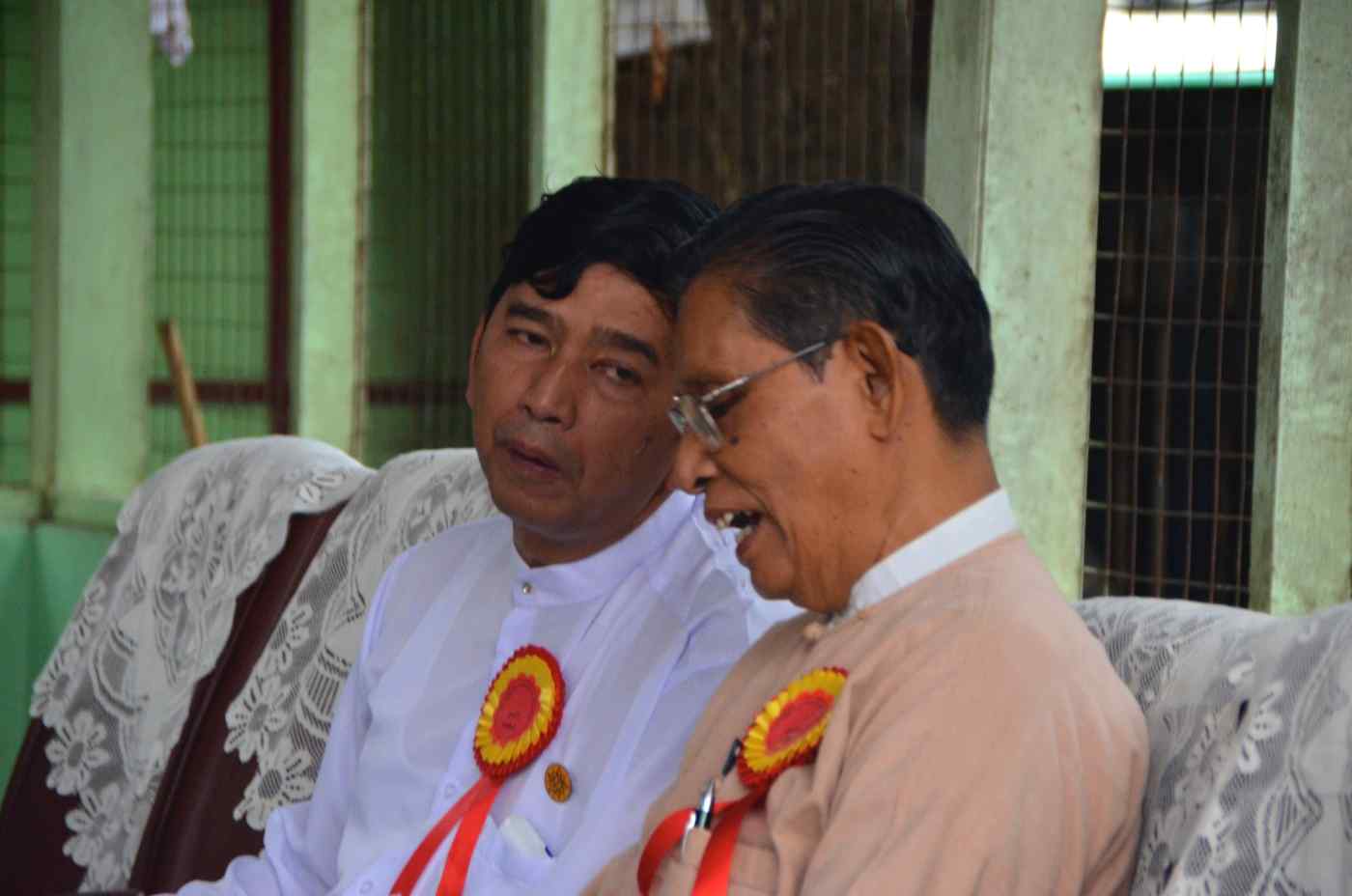 NAYPYITAW -- Although the opposition National League for Democracy boycotted Myanmar's last national elections in 2010, it always seemed unlikely it would do likewise in this year's vote, despite some earlier suggestions to the contrary.

In early 2012, the NLD won 43 out of 45 seats in parliamentary by-elections, and is widely seen by most observers as the party likely to win the lion's share of votes in any free and fair nationwide poll.

So, on July 11, just a month after party founder Tin Oo said it was unlikely that the NLD would boycott this election, party leader Aung San Suu Kyi put an end to any doubts by announcing on Saturday that the party would compete on Nov. 8.

"Our aim in running is to implement the unfinished democratic reforms," Suu Kyi said, speaking in Burmese in the capital Naypyitaw on July 11.

For the NLD, however, the elections are not only about completing Myanmar's reforms, which began in 2011 with the advent of a nominally civilian government and the end of direct military rule. The poll also offers a belated opportunity to reverse the outcome of the last "free" election in the country in 1990, when the party won a clear victory, only for the ruling military to refuse to hand over power.

Back then, the junta said that the election was no more than a prelude to the drafting of a new constitution -- a process that took another 18 years, during which Suu Kyi and many of her party colleagues were kept in detention. Myanmar, also known as Burma, became a byword for military dictatorship and the arbitrary arrest of thousands of opposition politicians and activists. Now, four years into a reform process initiated by the army-linked ruling Union Solidarity and Development Party, the NLD can see a real chance of ousting the incumbents, not least because the country's first-past-the-post electoral system gives the NLD an advantage.

The NLD has the backing of the 88 Generation, an influential group of former students who formed the vanguard of mass protests staged in 1988 against the nominally socialist dictatorship of the day.

The 88 Generation has said it has no plans to form a party to contest the election, but some members will run as candidates for other parties, which could bolster the NLD's effective parliamentary strength, given the shared goals of the two groups. "Some people might decide their own way," Mya Aye, a leading 88 Generation member, told the Nikkei Asian Review in May, while Ko Ko Gyi, another of the 88 Generation group, said recently he would seek a seat in parliament.

The USDP has the advantage of incumbency, but the party appears split over possible presidential candidates, which include parliamentary speaker Shwe Mann and President Thein Sein.

The Nov. 8 elections are for 1,171 legislative seats at regional and national levels -- the latter which in a form of "electoral college" system will in turn elect the president and two vice-presidents in early 2016. But already politicians and voters alike are thinking about who might take over from Thein Sein.

Tacitly acknowledging that the USDP could lose in a free and fair vote, Shwe Mann has aligned with Suu Kyi, perhaps hoping to get the NLD's backing for his presidential candidacy. But Suu Kyi in announcing her party's participation said that the NLD's presidential nominee will come from within its party ranks, with early speculation centering on central committee member Win Htein, as well as on Tin Oo, even though he is 88 years old.

Thida Oo, an 18-year-old student from Yangon, who is no relation to her NLD namesake, said she would support the NLD, primarily because of its storied leader -- the daughter of General Aung San, widely seen as the father of the modern Myanmar state. "Whether she can be president or not, I will vote for Amay (Mother) Suu because she is charismatic and charming," Thida Oo said.

Ko Thet, a 40-year-old resident of Naypyitaw, said that he hoped that Thein Sein would be returned to office: "I like his reform process though it is slow, it goes smoothly and sometime rapid changes can affect progress."

The spokesman for the president said that Thein Sein had not yet decided if he would put himself forward. "The president will fully inform the public about this at the appropriate time," Ye Htut, who is also Myanmar's information minister, told the NAR.

Meanwhile, with four months to go until voting day, the 86 parties registered to contest the election are focusing on issues such as candidate selection, policy formulation, and on the country's election readiness.

The national election commission has been criticized over anomalies and omissions in preliminary voter lists. Suu Kyi said that "there are many, many errors in the voter lists, and if there is an error it means that the voter concerned will not be able to cast his or her vote on the day of the election, so this is a grave concern with us."

Speaking to the NAR, election commission chairman Tin Aye emphasized that there was still time for voters to get their names on the list: "Since we have started pasting the lists in each and every township, only 45% of eligible voters have checked them. If they find any mistakes they can easily inform the local [election commission] to correct it."

The lists are based on local township registers, many of which are outdated. During Myanmar's military rule, civilians were required to register with local authorities or face sanctions, but that is no longer the case.

"In the past, people were punished if they did not report to the local authority," said Ye Htut. "Nowadays, it seems that many people are not bothered about going," the minister added, hinting at reservations within the government about some of Myanmar's post-junta liberalization. Aung San Suu Kyi speaks at a NLD rally in Pathein, Myanmar, during the run-up to the April 2012 by-elections (Photo by Simon Roughneen)

In another signal of Myanmar's new-found openness, a number of foreign organizations are on the ground to observe the electoral process.

One of these, the Carter Center, founded by former U.S. president Jimmy Carter, cautioned that though the government was working "to make the electoral process more transparent and less vulnerable to manipulation," many issues needed to be addressed.

These include voting rights for people in refugee camps, and for the Rohingya, a stateless Muslim minority of over 1 million, most of whom were allowed vote in the 2010 election and backed Rohingya USDP candidates.

Despite such concerns, Ye Htut said the government "will do our utmost to make this a free and fair election."

A free and fair election seems to be what the Myanmar public wants. A 2014 nationwide survey of 3,000 Myanmar voters carried out by the International Republic Institute, a U.S. lobby group linked to the Republican Party, found that nine out of 10 people intended to vote in any upcoming election.

Unsurprisingly perhaps, after five decades of military dictatorship, three quarters of those canvassed agreed with the IRI's formulation that "democracy may have its problems but is better than any other form of government."

Shadows over the vote

However, the NLD's participation remains overshadowed by the military's refusal to change the constitution, which bars Suu Kyi from becoming president or vice-president on the grounds that her sons hold foreign citizenship.

The army's allocation of 25% of parliamentary seats allowed it to block other proposed amendments that would have firstly removed its own veto on change, and allowed ministers in charge of Myanmar's ethnic minority regions to be elected locally rather than appointed centrally.

Khun Htun Oo, leader of the Shan Nationalities League for Democracy, said that the country's diverse ethnic minorities want greater decentralization."We want to appoint our own [chief minister], as the "military is not trusted [by ethnic minorities]," Khun Htun Oo told the NAR. The Shan people live mostly in Shan state along the Myanmar-Thailand border and are estimated to number 6 million people, making them Myanmar's biggest ethnic minority.

But voting may not be possible in some ethnic minority regions, including parts of Shan state, where several local wars are continuing despite wider efforts to forge a nationwide ceasefire.

Civil conflict is not the only shadow hanging over the election, with dozens of demonstrators jailed after highlighting issues such as education reform and land rights in recent months. More protests are likely in the run-up to the election over issues such as workers rights and a proposed minimum wage.

Discord over social and economic issues might open a window to contenders such as the Farmers Development Party, which hopes to win seats in rural areas where subsistence agriculture is the norm, and where decades of land grabs, often by military-linked businesses, have deprived thousands of their farms and livelihoods.

Meanwhile, anti-Muslim sentiment has been fomented by Buddhist hardliners, the most prominent of which is the Mandalay-based monk Wirathu, at whose apparent behest parliamentarians recently voted to restrict interfaith marriage.

To the disappointment of foreigners who have long regarded her as a lodestar for the defense of human rights, Suu Kyi -- perhaps cowed by the monks -- has kept silent on discrimination against the Muslim Rohingya.

In another example of their influence, the monks managed to force the cancellation of new building projects in Yangon, which critics said would obscure views of the gilded Shwedagon Pagoda, the country's best-known Buddhist shrine.

Their influence, according to Matthew Walton, a Myanmar expert at the University of Oxford, means that "USDP and NLD leaders should be thinking about this as a real issue for the next government, whoever leads it."

But regardless of these issues, the NLD will be trying once again to change the constitution after the election, citing the backing of the 5 million Burmese who last year signed a petition seeking amendments.

"The parliament rejected the amendment of the constitution, which means that they neglect the people's voice," Suu Kyi said on on July 11, underlining what for many observers will be as much a test of Myanmar's democratization credentials as will the elections themselves.